Narcissists at Work That Make Your Workplace Toxic and Unproductive 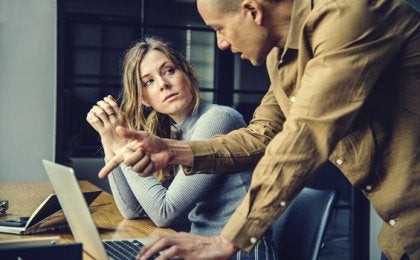 A work environment riddled with tension, anxiety, criticism, and low productivity isn’t a good place to work at all. Narcissists at work undermine initiative and even just basic activities. They always need to be the center of attention. Narcissists need all the praise and their strategy to get it is quite destructive. They sabotage their co-workers’ rights and well-being.

Experts in personality psychology argue that all of us are narcissistic sometimes. However, when we encounter narcissistic people in our work environment, things get really complicated.

Your workday takes up a large part of your time. Not only that, but you’re financially dependent on your job and you have professional goals for your particular career or position. Having to work with harmful and toxic people makes it difficult to do your job and fulfill your purpose.

It isn’t easy to deal with narcissists on a day to day basis. Their behavior is often as irrational as it is exhausting. If you don’t have strategies to defend yourself, they might affect your quality of life.

Although there are studies that state we’ve seen a reduction in narcissism in recent years, such as this University of Illinois study, it’s still crucial to know how to deal with narcissists for your well-being and professional life. Let’s take a look at some strategies that will help you coexist with them.

How to recognize narcissists at work

Work narcissists have a lot of names. They’re the social climbers, the opportunists, the ones who gossip, and the selfish ones who don’t know how to work as a team. They make decisions without consulting anyone. They are, in short, those who create a suffocating and unproductive work environment. Narcissists kill their coworkers’ motivation, initiative, and desire to go to work every morning.

We should clarify something about narcissism. There are people who might have one or two narcissistic traits. On the other hand, a small percentage of the population suffers from narcissistic personality disorder. Consequently, there’s a spectrum most people fall on. Some people seem to check all the boxes, while others have their narcissism in check. People who are mildly narcissistic might even fix their behavior with the proper feedback.

Let’s take a look at the profile of a classic narcissistic since these kinds of people can really harm their coworkers and their company.

Likewise, psychologists Sander Thomaes and Bram Brushman from Utrecht University conducted a study that found that narcissists are often very charming at the beginning. They might be that nice, friendly co-worker or boss that you can go to for help. However, their real intentions become clear over time.

How to survive narcissists at work

Narcissists at work can make you feel burned out and exhausted. They might affect your desire to grow professionally. Things get even more complicated if your boss or supervisor is narcissistic and they don’t care about your rights. In extreme situations, we recommend that you ask for a workplace assessment or go to human resources.

In everyday situations, understanding some basic ideas can help you maintain your workplace motivation and goals.

Get to know them and understand their weak spots

This first strategy is very basic. You have to avoid playing their same game. You must remember that they only want admiration and recognition. Never forget that their weak spot is their self-esteem. In order to do that, keep the following things in mind.

A narcissist always wants immediate attention. They feed off of it. Don’t give it to them. Make them see that they’re not that important to you. Your priority is your job and your goals. If the narcissist is your boss, try to avoid fulfilling their requests immediately. This is especially important if the demands aren’t particularly relevant to your job and they’re just looking to put you on the spot.

Narcissists demand, humiliate, lie, and only think of themselves. They can’t see beyond their own noses. When faced with this behavior, remember your needs and your rights. If something doesn’t seem right, say so. Justify yourself using “I” statements. Be assertive and call out their lack of empathy. Don’t give in nor fall into their trap.

Put it in writing

Narcissists at work only demand things from others. As such, the best thing is for all those demands to be in written form (such as emails or memos). That way, you’ll have evidence if there’s an incident. You need to be able to show the specifics of a particular demand.

Don’t fall into their trap

Narcissists always want to know things about you that they can use in their favor. Thus, they’ll often try to get on your good side to create a sense of intimacy and get information. Avoid falling into their trap. Avoid talking about your personal life and be careful about sharing opinions and information. A narcissist might use this information against you later.

Be clear about your values and your rights

One of the most common problems with this type of personality is unethical behavior. They infringe on other people’s rights. The worst part of all is that they often push other people to engage in illegal activity.

That’s why it’s critical to know your workplace rights. You should have access to good information about labor law and company guidelines. Narcissistic bosses often know how to manipulate their employees to achieve illegal (and unethical) ends. Avoid doing something you might regret later by being assertive. Remind them of the limits.

In conclusion, narcissists at work can be highly problematic. Sometimes they engage in harassment or mobbing. Other employees often choose to leave their jobs to avoid narcissistic coworkers. We know it isn’t easy, but try to set boundaries. Don’t give in to this type of behavior.

Assertiveness at Work: 5 Key Elements
We should all practice assertiveness at work. It can greatly benefit our career and improve our working environment. Read on! Read more »
Link copied!
Interesting Articles
Psychology
The Difficulty of Facing the Feeling of Emptiness

Psychology
Three Approaches to the Study of Personality

Everyone knows what personality is, but no one can explain it with words. This is one of the main problems in the…

Psychology
Why is Gender-based Violence Increasing Around the World?

You know what you've been through better than anyone else, but sometimes, your ideas seem to get tangled in your…

Interesting Articles
Self-esteem
Why Aren't You Satisfied With Your Body?

Wellness
3 Keys to Being More Determined