Marcel Proust isolated himself from the world at the age of 37. Asthmatic and weakened, he sought the refuge of his room to write and express every living moment of his past, which he reflected in his work "In Search of Lost Time". 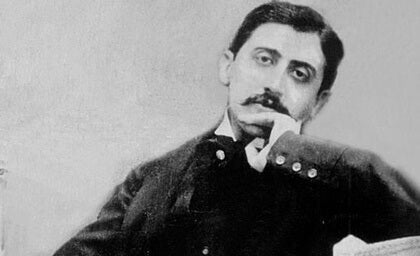 Marcel Proust was a writer of nostalgia. For lovers of literature, In Search of Lost Time is the pinnacle of perfection. No one had his delicate mastery of looking into the past and bringing it into the present. Few authors disguised an autobiography so well in the form of a novel. Because of this, he can be placed alongside Joyce or Kafka as forerunners of the contemporary novel.

Proust’s work is somewhere between the modernist and avant-garde movements, bringing us, in turn, brushstrokes of existentialist thought. We don’t only appreciate his ability as a writer but also his psychological depth. He spoke to us of the misfortunes of the past, frustration, and the brevity of hope.

He put a camera in the fabric that made up his life and gave us a portrait of a society in a unique chronicle that he published in seven volumes. There was that moment when Proust dipped a cupcake in his chamomile tea and was instantly transported back to his childhood. Memories were, after all, the only way to stay connected to life.

Marcel Proust was a sickly man who cut himself off from the world at the age of 37. He cocooned himself up in his room, which was lined with cork and perfumed with incense to relieve his asthma. This way, wearing coats and scarves, he created, one piece at a time, the work of literature that we can all enjoy today.

“The real voyage of discovery consists, not in seeking new landscapes, but in having new eyes.”

Marcel Proust: Biography of the writer of subjectivism and memories

He was born in Auteuil (Paris) in 1871. He was the son of Adrien Proust and Jeanne Weil, a well-to-do family whose heritage was based on the work of his father, an eminent and renowned epidemiologist. However, this didn’t prevent little Marcel from seeing his life limited by asthma from the age of nine.

He grew up under the continuous attention and affection of his mother. He studied at the Lycée Condorcet, where he excelled in the area of letters and philosophy. At the age of 17, people knew him as a young snob who frequented Parisian salons.

There, he moved with great skill among the high bourgeoisie, writers, painters, and also among the ladies. People knew him for his skillful conversations and ingenuity.

Unlike his brothers, he decided not to follow the family tradition of studying medicine. He worked for a time in the Mazarin Library in Paris and then devoted himself to writing. This task was always spiced up by his vibrant social life. He was a chronicler of high society and the aristocracy who frequented almost any party around. However, he also hid a double life and often frequented male brothels.

The death of his mother and his retirement from society

In 1906, Marcel Proust suffered the loss of his mother. This affected him deeply, given the attachment and constant dependence he had on her. After this event, he traveled to Versailles, where he met Robert de Montesquiou, a homosexual poet who also introduced him to the elegant salons of the time.

There, he met figures such as the Countess Greffuhle or the Princess of Wagram, people who had an influence on his later works.

In 1913, he presented his work Swann’s Way (the work that initiated the seven-volume In Search of Lost Time), but no publisher was interested. Thus, he was forced to publish it himself. Later, the second part, In the Shadow of Young Girls in Flower (1918), came, which earnt him the Goncourt Prize.

At this time, Marcel Proust used a very particular style of writing, which he called “automatic memory”. It was a strategy he used to bring the past into the present, with all its emotions, nuances, sensations, and sensibilities. All this shaped a very detailed and even labyrinthine writing.

However, when he turned 37, Marcel Proust decided to leave public life. He locked himself in a room lined with cork and incense in order to cope with his asthma. He dressed up in his coats and scarves in order to pen all the experiences he had had up until then.

In 1922, his last work, Sodom and Gomorrah, was published. On October 10, he decided to venture out on to the streets, and, a week later, he was diagnosed with pneumonia and died.

His greatest work: In Search of Lost Time

Marcel Proust wrote In Search of Lost Time between 1908 and 1922. It contains seven volumes, in which the author evokes his memories of that world of vices and dreams that made up a large part of his Parisian life. This work and its publication were initially rejected by André Gide, Gallimard’s advisor.

Despite these refusals, Marcel Proust never gave up. Asthmatic and seriously ill, he struggled against time to recover every detail, image, and experience he’d lived in order to write what was really an autobiography.

The plot couldn’t be simpler, and yet it was complex at the same time. Basically, it’s the story of a child who became an adult and learned about life and the world.

It’s the portrait of an era and of a somewhat spoiled narrator who loved to attend the salons that the upper class frequented in Paris. The descriptions and its bold writing full of detail leave no one indifferent.

Suddenly, a noise, a taste, or a smell brings us back from the past and transports us to a particular moment in time. Its insight into the psychology of human beings is both wonderful and exquisite.

Life can be a work of art

Something that Marcel Proust teaches in his work In Search of Lost Time is that life itself is a work of art. He himself is immersed in this process of writing, fighting, and trying to steal back days and months from that terrible date with death itself, all in order to translate his memories into words.

This alchemy, which shaped the seven-part collection, forms a magical combination of infinite reflections on love, suffering, jealousy, Bergson’s philosophy, impressionism, and Debussy’s music. It’s a work that’s full of sensitivity and nostalgia where one can enjoy the life that Proust himself enjoyed. With its darkness and contradictions, yes, but equally beautiful and fascinating. Few works have influenced the history of literature.

Midnight in Paris and the Two Types of Nostalgia
Gil goes out for a walk at midnight when Paris grants him an incredible opportunity: he travels back in time to Paris in 1920 to explore his nostalgia. Read more »
Link copied!
Interesting Articles
Biographies
Humboldt: Explorer Extraordinaire