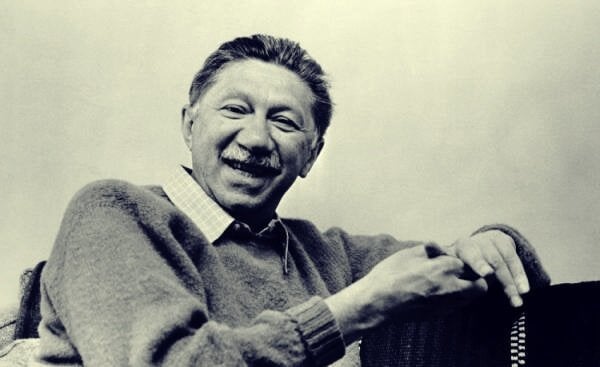 Abraham Maslow is one of the most important names in psychology. Psychologists consider him to be the father of what we call “humanistic psychology”. This is a type of psychology that falls between psychoanalysis and behaviorism. It has had a great influence on how psychology has developed throughout time.

Abraham Maslow, the son of Jewish immigrants, was born in Brooklyn, New York on April 1, 1908. Maslow didn’t have an easy childhood. He experienced a great deal of discrimination throughout his adolescence. This discrimination is perhaps what motivated his interest in psychology and how our brain acts in different circumstances.

Maslow said on several occasions that he wasn’t a happy child. He found it hard to be accepted, which stimulated his curiosity. The library was his second home. There, he began to cultivate a sharp intelligence which made him one of the best students.

“A musician must make music, an artist must paint, a poet must write, if he is to be ultimately happy.”

He first believed he was going to study law. Maslow actually began the career but soon realized that his true passion was psychology. His passion for psychology led him to leave New York and begin his studies at the University of Wisconsin.

His life changed forever during his college years. He married an older woman and met who would become his first mentor: Harry Harlow. Together with Harlow, he began to carry out his first studies on primates. Maslow was particularly struck by the primates’ sexual behavior and the power relations.

A few years later, he returned to New York and worked as a teacher at Columbia University. There, he met Edward Thorndike and Alfred Adler. The latter, who was very close to Sigmund Freud, became his second mentor.

Abraham Maslow was, above all, a great observer and a passionate researcher. Beyond the understanding of human behavior, Maslow was motivated by the idea of finding the means to help others take steps to become the best people they could be. In his thesis, he actually raised the initial theory he named Maslow’s Hierarchy of Needs.

His pyramid condenses the main axes of his theory. It raises the existence of a set of human needs that all human beings share. Such needs start from our need to satisfy basic needs, such as nourishment, to the most abstract needs, such as creativity.

Maslow stated that the base of the pyramid must be physiological needs. Then, successively, the needs for safety, love/belonging, esteem, and self-actualization.

Maslow’s theories didn’t have a great initial reception. Some psychologists at the time, especially in the behaviorist school of thought, found his theories too rigorous and heavy in scientific terms. They thought that they dealt more with humanism than psychology.

His theory wasn’t well received in the psychoanalytic community either. They didn’t like it because it strayed away from Freud’s basic assumptions. However, Maslow himself gave credit to the Viennese psychoanalyst. Maslow did, however, critique Freud’s work because he felt that it fell short in its understanding of human behavior. In his opinion, Freud had studied only neurotic behavior and fell short when it came to healthy behavior.

Despite the resistance, Maslow’s theory ended up attracting the attention of the psychologists of his time. The idea that human beings have structured needs and that our well-being is conditioned by the satisfaction of these needs was interesting to intellectuals. Professionals in other disciplines such as sociology, anthropology, and marketing also began to pay credence to Maslow’s theory.

That was how, in 1967, the American Humanist Association named Maslow the Humanist of the Year. Maslow never stopped teaching throughout his career. Even in his later years, he taught occasionally. He filled his time with an assortment of projects, some of which he never concluded. He died in 1970. His theories laid the foundations for what would formally become the humanist school of thought.

Maslow’s theory of human needs
Abraham Maslow created the hierarchy of human needs, which is based on the existence of a series of needs that concern every individual. Read more »
Link copied!
Interesting Articles
Culture
The Rules of Ikigai

Japanese culture has influenced other cultures. Some Japanese teachings are now crossing into our borders. One of the most innovative ones is ikigai. This idea is relatively new, but it's…

We've all overslept and still felt tired. In these cases, maybe you were so sleepy during the day that you…