The love story of Mala and Edek wasn't publicly known until many decades after it happened. Both were prisoners in the Auschwitz concentration camp, from where they escaped and met a tragic fate. 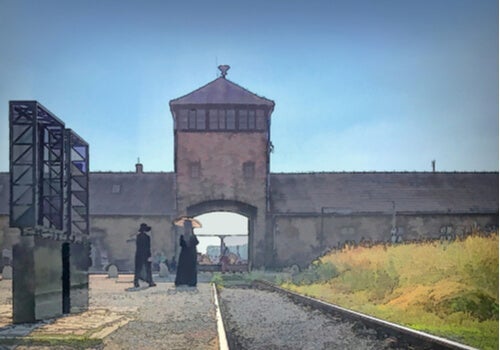 The tragedy of Mala and Edek is a love story that developed and became eternal in one of the most awful places on earth: the Auschwitz concentration camp. Their lives had been practically forgotten until journalist Francesca Paci decided to rescue them. Hence, she wrote the book Lovers in Auschwitz.

Mala and Edek were still young when they ended up, separately, in a concentration camp. They had to grow up fast in a rather nasty environment.

However, they didn’t grow old together as they once dreamed. Still, they became an example of how love is stronger than any atrocity. That this feeling gives value to everything.

Someone who met Mala and Edek told their story at the concentration camp. Their love inspired men and women alike, despite the deplorable circumstances in which they found themselves. As you can see, true love can change the lives of those around them.

The protagonists of this story are Mala Zimetbaum and Edward Galiński, “Edek” for short. He arrived at the Auschwitz concentration when he was just 16 years old, before Mala. He was a young Polish man still in high school. The Nazis arrested him during a raid and sent him to the Tarnów prison.

A few months later, in June 1940, he ended up at the Auschwitz concentration camp. Edek arrived with the first group of prisoners there and soon learned to adapt. His mantra: ​​”who and what you must avoid and what to hold on to in order to survive“.

Two years after being in the concentration camp, he talked the officers into opening a locksmith shop.

His initiative and dynamism in this project earned him a certain sympathy among those in charge. Thus, he had a privileged position. He took advantage of it to take the weakest prisoners to the shop, especially those who couldn’t tolerate extreme physical effort.

Mala and Edek fall in love in Auschwitz

Mala Zimetbaum was from Poland but moved to Belgium at a young age. She excelled as a student, mainly in language and math.

The Nazis arrested her in 1942, in Antwerp, and deported her to a concentration camp. They assigned her as translator and messenger from the beginning because she was fluent in five languages.

Mala had a privileged position, just like Edek, so she took advantage of it to help people in need. Then, they met during one of his assignments in a squad of installers in the Birkenau field.

It was love at first sight. They began to meet secretly whenever they could; everyone in the camp referred to them as “Romeo and Juliet“.

Love also gave birth to a deep desire to be free. They were aware the world didn’t know what was going on in the concentration camps. Thus, together, they began to hatch the idea of ​​running away to report the situation.

Of course, they also wanted to be together forever. Thus, they began working on a plan that seemed crazy and, it was perhaps for that reason that it worked.

The plan to escape included Edek wearing an SS officer’s uniform. He was to go to the edge of the camp and meet Mala in this disguise.

As for Mala, she was to disguise herself as a man and cover her head to hide her hair. The plan was to pretend that an officer was just leading an inmate who would install the sink.

Once at the front door, both of them would show some exit passes they had. It might be hard to believe but they actually did it on June 24, 1944. Thus, they were free and nearly reached the Polish border. However, when Mala went to a store and tried to exchange a ring for something to eat, it aroused suspicions among the employees. They notified the police.

The police stopped Mala while Edek looked at her at a distance. Because the two had promised to be together forever, he voluntarily surrendered to the Nazis.

The police led them to a punishment area in Auschwitz. They locked them up in separate cells. Still, they managed to send each other messages on tattered pieces of paper. Also, Edek sang Italian arias to her from his cell.

Edek was to die by hanging. He tried to do so himself but didn’t succeed. Before dying, he shouted, “Long live Poland!”

Mala cut her veins before her execution, also sentenced to die by hanging. Then, they sentenced her to burn alive for it. However, the guards sympathized and allowed her to bleed to death before she reached the crematorium. Mala and Edek died the same day, just an hour apart.

Anne Frank: A Story of True Resilience
Anne Frank made her diary, now translated into 70 languages, a vehicle for reflection and reaffirmation, in the midst of extremely difficult conditions. Read more »