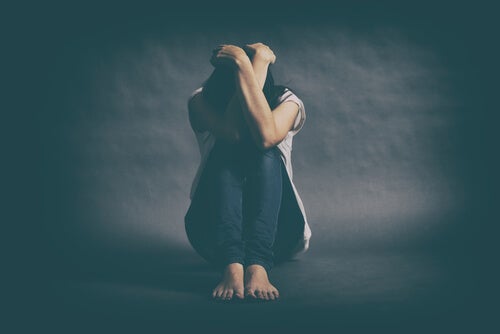 When you hear the word depression, you might automatically picture a sad person crying uncontrollably and isolated from other people. But if that’s the case, then what separates depression from sadness?

It’s a huge mistake to confuse these concepts, because even though they’re intimately related, they’re on a spectrum where major depression is on the farthest, most crippling end.

We know that emotions have an important adaptive function. Whether positive or negative, they’re all necessary for us to function properly in our environments. Therefore sadness, even though it’s a “negative emotion,” is still healthy and adaptive. And it’s partly because of sadness that we’ve managed to survive as a species.

For example, if you lose a loved one, you will feel sad. You will feel pain and if you deal with it in a healthy way you’ll go through some or all of its stages. The idea is that once you’ve made it through those stages, you can go back to the same state you were in before the loss. Of course you will still always remember that important person fondly and miss them.

So, sadness is healthy, necessary, and purposeful. That’s why when sadness comes, the best thing to do is let it in. Don’t deny it or fight it, and little by little it will start to disappear.

What is major depression?

Like we’ve said, major depression is a few steps beyond sadness. It’s classified as a disorder and that means we should treat it with all the seriousness and respect that it deserves. Before we explain some of the possible causes, we’re going to define what exactly this disorder is.

Major depression is defined as the simultaneous presence of a variety of important symptoms, and they have to last for at least two weeks. A diagnosis requires at least one of these symptoms, whether it’s a state of sadness or depression, or a loss of pleasure (anhedonia) in activities a person used to enjoy.

However, it’s not enough just to have these symptoms. For it to be major depression, they have to significantly interfere in a person’s daily life.

A diagnosis of major depression also has to meet two more exclusion criteria:

To diagnose a person with major depression, they cannot have had any manic or hypomanic episodes, schizophrenia, or any other psychotic disorder.

There’s no one single cause that determines whether a person will develop major depression. But we can see from the scientific literature that there are many different explanatory theories.

On a biological level, an imbalance in brain chemicals, especially the well-known neurotransmitter serotonin, might be what leads a person into a state of deep sadness or anhedonia.

Even today we aren’t completely certain if these biochemical imbalances are a cause or an effect of depression. So it’s hard for us to say whether low serotonin levels in a person’s brain are what causes them to become depressed.

There are also theories that have more to do with psychology. These are currently the most well-supported theories. The most well-known one comes from Aaron Beck. It’s popular for two reasons:

What can we learn from Beck’s theory of depression?

Beck thought that after the loss of a supporter (a positive consequence of behavior) and the natural subsequent feeling of sadness, a person would make certain cognitive mistakes.

They would make errors in processing information, which would lead to and sustain major depression. What this basically means is that a depressed person isn’t capable of being objective when taking in the information around them. So they end up negatively distorting reality.

Some of the more common distortions in depressed people include:

So a person finds themselves immersed in a negative triad. They have a permanently negative perception of themselves, their experience, and even worse, their future.

It’s this distorted cognitive processing that will lead, according to Beck, to the emotional symptoms (deep sadness, loss of appetite, feeling of emptiness, etc) and the behavioral ones (inhibition, apathy, etc).

These emotional and behavioral symptoms will reinforce the person’s negative thoughts. But Beck doesn’t ignore the fact that there are also important genetic, personal, and hormonal factors — among others — that play into how a person processes information.

How to treat major depression

The most widely used medications are called selective serotonin reuptake inhibitors (SSRIs). These are used more commonly because they have fewer side effects than tricyclic antidepressants or monoamine oxidase inhibitors (MAOIs). You’ve probably heard of Prozac (fluoxetine), an SSRI.

What these medications are supposed to do, as their name suggests, is prevent serotonin from being quickly reabsorbed. As a result, the serotonin won’t lose its effect on the brain as quickly when it’s released into the small space between neurons. This medication acts like the initial impulse a person would have if they felt more eager to do things.

As for psychological treatment, the type proven to be most effective lines up with current cognitive-behavioral trends. If we assume the cause of the depression is that the person has a negatively distorted perception of their own life, feelings, and actions, then the goal of treatment will to modify those cognitive patterns.

Following this logic, therapy focuses on modifying the way the person thinks. It gives them tools to identify and modify these patterns. So by changing their way of thinking, they’ll start to do things that used to give them pleasure, but that they had stopped doing. This might include starting to do new beneficial things, as well.

Modifying the patient’s thoughts and beliefs is not how therapy begins, though. You can actually start directly with behavioral activation. Here a therapist will help the person to outline a daily agenda including different tasks they’ll commit to doing. What’s the goal of this? The goal is to use action to bring back the desire that they used to have and that used to make them happy.

The weekly plan should include tasks related to control and pleasure. The control-related tasks will help the patient feel competent, no longer useless or a failure. For example, resuming a class or starting a new one. The pleasure-related tasks involve relaxation and enjoyment. These could be things like going shopping, taking a walk, calling a friend, etc.

The cognitive techniques psychologists use to modify negative thoughts and beliefs are cognitive restructuring and behavioral experiments. The goal of restructuring is to exchange the person’s extremely negative way of thinking for a more appropriate vision of reality. The idea is for them to realize that they can handle it and it’s not as bad as they think.

Lastly, depending on the patient, other techniques, like rational emotive imagery, may be appropriate. This involves a person seeing themselves doing an activity and picturing themselves modifying their emotions. In addition, therapists may use techniques like mindfulness — focusing on the here and now, and fully accepting the reality all around them–assertiveness training, and problem-solving training.

Depression Rates Have Risen by 18%
According to concerning data from the World Health Organization (WHO), depression rates have risen by 18% all around the world. Read more »
Link copied!
Interesting Articles
Psychology
Your Circumstances Are Tough, But You Are Tougher

Psychology
Anxiety's Impact on your Brain: A Maze of Exhaustion

Anxiety has a huge impact on your brain. Cortisol, adrenaline, and norepinephrine all put you on alert and on the defensive.…

Psychology
Indifference and Neglect: How to Hurt a Child

Childhood is when we build the foundations we'll construct our life on. What a child needs is love, acceptance and…

Psychology
Learn to Enjoy Being Alone

Throughout our lives, we were never taught how to be alone. And deep down, almost none of us really like to be. Given the family mandate and social pressure, sometimes we…