Lyme Disease and its Psychological Symptoms

Lyme disease can sometimes be mistaken for arthritis. However, this disease, caused by a tick bite, can also cause depression, memory loss, anxiety disorders, and obsessive thoughts. 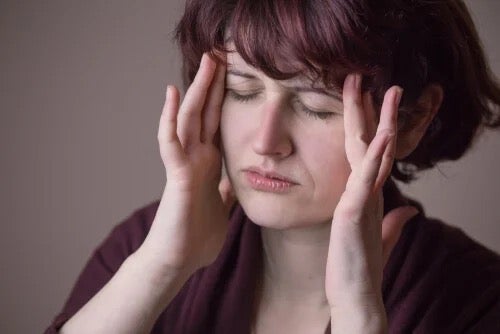 Lyme disease isn’t a particularly well-known disease. However, this infectious disease that’s transmitted by ticks can lead to debilitating and chronic psychological conditions. Nevertheless, doctors often tend to only focus on the physical symptoms. They frequently ignore the psychological effects, which are often quite serious.

Depression, mood swings, outbursts of anger, and memory loss are just a few of the frequently neglected symptoms of this disease. Furthermore, many patients with Lyme disease feel completely hopeless because they simply don’t understand why they’re suffering such disturbing psychological symptoms.

In fact, until quite recently, the medical profession tended to neglect the fact that mood disorders frequently occur alongside debilitating diseases, such as fibromyalgia or lupus. Consequently, the patients feel depressed and lack motivation. In the case of Lyme disease, the infectious process itself causes the mood disorder.

Lyme disease is a tick-borne infection caused by the bacterium Borrelia burgdorferi. The first symptoms of the disease are the tick bite itself, joint pain, headaches, fever, and heart problems.

Experts first described Lyme disease in 1976. It tends to be more common in the United States, especially in states such as Maine, Virginia, Wisconsin, Minnesota, and Michigan. However, cases occur every year in all states. Europe, Russia, China, and Japan also register cases.

Tick bites usually occur during the summer and early fall. These ectoparasites carry the four types of bacteria that cause Lyme disease: Borrelia burgdorferi, Borrelia mayonii, Borrelia afzelii, and Borrelia garinii. These last two are the most common in Europe and Asia.

The psychological symptoms of Lyme disease

Drs. Allen Steere and Jenifer Coburn conducted a study at Harvard Medical School in which they discussed Lyme disease as a public health problem. Indeed, in recent years, there’s been a marked increase in diagnoses in Germany, Austria, Slovenia, and Sweden-

As we mentioned above, the psychological aspect of this disease is often neglected. In fact, some patients receive a diagnosis of mental illness before being diagnosed with Lyme disease. The disease attacks the brain and spinal cord, causing neuroborreliosis. The psychological symptoms of Lyme disease are the following:

Many health professionals now recognize the fact that, when a doctor diagnoses a psychiatric disorder, they often don’t consider the possibility that it might be caused by an infectious disease.

In fact, as we mentioned earlier, Lyme disease is often slow to be diagnosed. One such well-known case was that of the singer Avril Lavigne. For this reason, doctors should always be aware of this condition.

The treatment for Lyme disease is always based on the administration of antibiotics. However, before prescribing them, the doctor has to evaluate the state of the patient’s immune system. This way, they can discover the exact stage of the disease. Generally, doctors prescribe intravenous treatment of antibiotics like ceftriaxone or doxycycline. They also prescribe vitamins, antioxidants, and other drugs to boost the patient’s defenses.

Doctors often treat the psychological symptoms with anti-depressants. However, in many cases, patients experience relapses after treatment. In these cases, the illness can become a chronic disease. In fact, it can even be sexually transmitted.

Organizations such as the International Lyme and Associated Diseases Society (ILADS) have called for greater attention and new therapeutic strategies for this disease. Similarly, May is National Lyme Disease Awareness Month.

In nature, the smallest creatures are often the most dangerous. As is the case here, it seems almost impossible to believe that something you can barely see can cause so much damage.

Chronic Illness and its Social and Emotional Effects
As well as affecting you physically, chronic illness has social and emotional effects. This article explains what they are. Read more »
Link copied!
Interesting Articles
Illnesses
Gut Microbiota and Addiction