Can you imagine being unable to fake an emotion with your facial expressions? Or worse, not being able to show what you're feeling on your face? 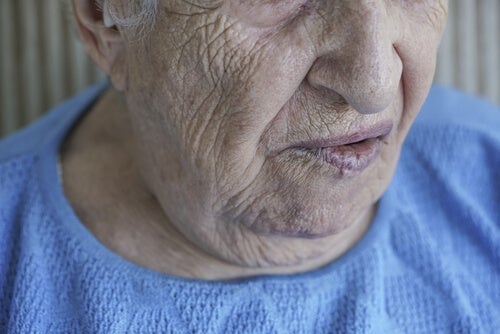 Facial expressions are a fundamental part of appropriate social interactions. They’re also very important for correctly interpreting other people’s emotions. Consequently, people with facial paralysis can have problems with social interaction as well as emotional recognition.

You express emotion and feign particular facial expressions that correspond to certain emotions using the muscles in your face. Facial movements are controlled by two independent circuits. Whether what you want to express is genuine or fake determines which circuit your brain activates.

This kind of paralysis is due to an injury in the insular region, the white matter of the frontal lobe, or the thalamus and left hemisphere areas of the brain. This system is associated with the physical architecture responsible for the voluntary movements of facial muscles. It connects to the medulla oblongata and the caudal region of the protuberance.

Damage to this system leads to an inability to express genuine emotions on the side of the body opposite to the injury. In this case, that would be the right side of the face.

However, people with this kind of paralysis are perfectly capable of reproducing (or faking) any kind of facial expression on both sides of their face.

Individuals with volitional facial paralysis can’t move their facial muscles when they’re trying to fake emotion. The side of the face that’s contralateral to the injury doesn’t respond to the brain’s signal to make a particular facial expression.

When emotion is genuine, however, the facial muscles on both sides of the face respond normally. Individuals with volitional facial paralysis are incapable of correctly faking an emotion that they don’t actually feel.

The ability to mimic other’s emotions and feedback of your own facial expression is what allows you to put yourself in other people’s shoes, recognize their emotions, and respond appropriately.

A neuroimaging study showed that observation and imitation of emotional expressions trigger an increase in the activity of the frontal area of mirror neurons. That leads to more empathetic behavior and better relationships with other people.

In any case, the fact that the ability to reproduce other peoples’ facial expressions helps with emotional recognition doesn’t mean that people with facial paralysis are completely incapable of doing so. It simply means they might have more trouble than most.

The role of facial expressions in emotional recognition

As you know, emotional expression allows you to communicate with the world around you. Nevertheless, this function only makes sense if other people are able to comprehend that emotional state and respond appropriately to it.

When you see another person’s emotional expression, your brain automatically, unconsciously, and imperceptibly reproduces that emotion.

Seeing facial expressions in others activates your mirror neurons, and they allow you to imitate those expressions. The feedback that happens when you imitate a facial expression is what allows you to understand how other people are feeling and empathize with them.

Facial expression allows you to engage in non-verbal communication, which enriches the words that you say.

Interpreting other people’s facial expressions also allows you to infer their needs or desires. That often happens before you can figure them out through other channels. Facial expressions, in other words, make us the most intelligent beings on the social plane.

If you’re unable to recognize facial expressions of those around you, it can make relationships very difficult. Not only that, but the inability or difficulty with correctly expressing what you feel is a challenge for everyone around you.

Luckily, there are other means of communication available, even for people with facial paralysis. There’s verbal language, of course, and alternate forms of non-verbal expression. Imitation and prosody can also help compensate for problems due to facial paralysis.

At the end of the 20th century, a poll asked people to choose who they believed was the most important writer of the millennium. Franz Kafka, the child of Shakespeare,…