Can you imagine experiencing every new situation as if you'd already lived it? This is what happens to people with Louis-Bar syndrome. 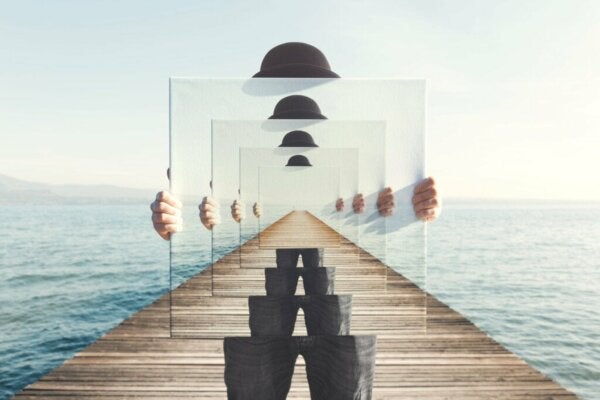 It’s summer. You’re at the beach with your family discussing a recent event while playing a game of cards. Suddenly, you think you already lived this; what you just had was déjà vu. Can you imagine what it would be like to experience this feeling all the time? This is what happens to people with Louis-Bar Syndrome, a condition named after the person with the first recorded case.

What exactly is déjà vu, though? Where does the name come from? How and why does it happen? Is it pathological?

What exactly is a déjà vu?

This term is French and means “already seen” and humans use it to refer to paramnesia, a recognition anomaly. It’s experiencing something you think you experienced before, even though you know you haven’t. As a result, a person experiences a certain sense of familiarity with situations, events, or occurrences that are actually new. In addition to this, it’s common to have feelings of “strangeness” or “alienation”.

This term was first used in 1876 by French philosopher Émile Boirac. He wrote to the journal Revue Philosophique de la France et de l’Étranger in response to a reader of the magazine who claimed to recall facts as if these were from a previous life. Boirac replied that he too had had the same experience: J’ai déjà vu ce que je vois (“I’ve already seen what I’m seeing”).

Psychologist Edward B. Titchener explains the cause of déjà vu is a brief vision of an object or situation before the brain has finished “building” a conscious perception of the experience. It would be like a type of “partial perception” that manifests itself as a false sense of familiarity. However, it wasn’t until 1896 that French psychiatrist Francois-Léon Arnaud coined the term déjà vu. Arnaud presented the case of his patient Louis to the Medical-Psychological Society.

Louis was a 34-year-old army officer no longer in service after being in Vietnam. He had some strange symptoms. Among them, he was confusing the present with the past and had a constant feeling of déjà vu in the previous years or months.

Louis went to the Vanves Health House, where Dr. Francois-Léon Arnaud worked. Not surprisingly, he said he recognized everything he was seeing for the first time upon his arrival. He also said he felt what he could feel what he “felt” the last time he was there. This phenomenon is known as déjà senti (already felt). Even when he met the doctor, Louis believed he was pretending not to know him when he said he didn’t.

Arnaud says that, despite the evidence that Louis hadn’t been there before, he firmly maintained he was living “two parallel lives” as he experienced everything twice.

Déjà vu is a normal experience. In fact, approximately two-thirds of the population has experienced it. However, chronic déjà vu isn’t normal; it often has to do with neurological damage. In fact, Louis’ symptoms seemed to be due to some kind of disease contracted in Vietnam that affected his nervous system.

Arnaud brings us closer to a simple but effective way of differentiating when déjà vu is normal and when it’s pathological. Healthy people experience it as something infrequent and transitory, with the awareness that the sensation of having seen or lived something before is nothing more than an illusion. Déjà vu is pathological when there’s a conviction that such an experience actually happened before.

Analyzing Louis’ case today, perhaps the most adequate diagnosis wasn’t déjà vu. This is because this term refers to a relatively normal experience. Perhaps his symptoms indicated a type of reduplicative paramnesia or a collective confabulation. This consists of a collection of fabricated memories used to cover memory gaps caused by amnesia.

To demonstrate this, there needs to be further neuroimaging studies. Also, it should be possible to provoke a déjà vu in a lab. It sounds complicated, yes, but at the speed at which science is advancing, the definitive answer might be closer than expected. Until then, may all cases of Louis-Bar syndrome be about happy moments.

Déjà vu: How Can I Know This Place if I’ve Never Been Here Before?
It’s not completely certain that paramnesia and what’s known as déjà vu are the same thing, although we often use them as synonyms because the latter is Read more »