How can a brain injury affect overall cognitive performance and behavior? In this article, we'll explain the main symptoms of dysexecutive syndrome. 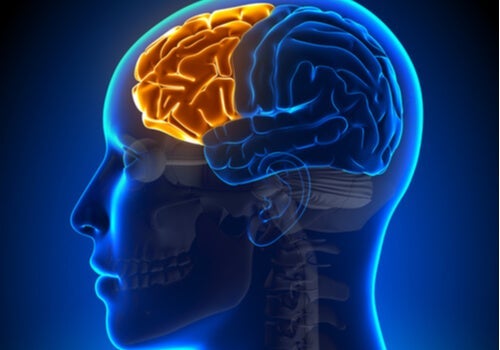 Dysexecutive syndrome (DES) stems from damage to the frontal lobe, more specifically in the prefrontal region. This part of your brain processes the most complex executive functions.

Consequently, damage to the prefrontal area causes memory problems, attention problems, issues with language and perception, among other things. However, the primary problem manifests itself in behavior. Dysexecutive syndrome encompasses a set of symptoms that affect patients’ intellectual performance.

The frontal lobe is, on a metaphorical level, the director of your brain’s orchestra. Consequently, while the symptoms depend on the specific area of the injury, the main consequences affect the following functions:

Changes in motor function tend to show up as pathological reflexes. These are automatic, uncoordinated, and maladaptive responses, such as the grasp reflex. Perseveration, on the other hand, is the inability to implement new strategies to carry out tasks.

One example of perseveration is if the individual tries repeatedly and unsuccessfully to open a door, but never changes their tactic. Another symptom is hyperactivity and difficulty paying attention to things.

As we mentioned above, attention is a function of the frontal area of the brain. If you suffer an injury in that area, you might have heightened reactions to sensory stimuli and have a hard time paying attention to the task at hand.

A brain injury impacts memory. It can severely limit your ability to retain information, as well as cause anterograde amnesia (the inability to create new memories), which often leads to confabulation. Finally, a brain injury can cause sequential disorganization of events, which contributes to a general sense of confusion.

Prefrontal damage isn’t always associated with apathy and lack of emotional response, but with immediacy and childishness. Generally, behavioral changes depend on the type and location of the injury. Those factors can result in very different consequences:

Given that the left hemisphere of the brain is mostly responsible for language, left-brain injuries can have some very negative consequences. Patients can have trouble with conceptualization and analysis. Most patients keep their formal speech, but because their ability to plan and memorize is impaired, their speech is repetitive. Behavioral changes also affect communication.

Changes in perception aren’t usually the most noticeable. The most obvious alterations are related to tasks that involve visual searches (selective attention). DES patients often have trouble recognizing people and places. They also display spatial negligence and problems controlling their eye movement.

The organic foundation of dysexecutive syndrome

The detailed symptoms tend to appear in comorbidity with frontal lobe brain injuries, especially in the prefrontal cortex. But neuropsychology research has allowed us to understand the more specific relationship between the symptoms based on the injured structure:

Neuropsychologists diagnose DES. They use standardized tests to help evaluate patients. The diagnosis is a process that involves neurologists and other healthcare professionals. That’s because an evaluation of the injury and a full report is necessary to make an accurate diagnosis.

Treatment involves recovery or maintenance of the patient’s cognitive functions, depending on the severity and location of the injuries. The intervention may also involve medication to help control the symptoms that affect the patient’s social life.

In conclusion, brain injury and stroke can cause dysexecutive syndrome. The main symptom is global intellectual negligence, where most executive functions are affected. The involved cognitive symptoms demonstrate the importance of avoiding risk factors and risky behavior.

The Prefrontal Cortex: One of the Most Interesting Parts of the Brain
The prefrontal cortex is the most sophisticated sign of our brain's evolution. It's also the part of our brain that makes us truly human. Read on! Read more »
Link copied!
Interesting Articles
Brain
The Neurobiology of Intuition or Your Gut Feelings

Interesting Articles
Healthy Habits
Listeners Need to Be Heard Too