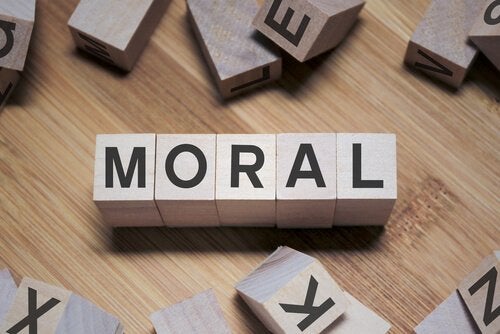 We’ve all developed our own non-transferable morality. We have values which not only separate “good” from “evil” in the abstract world but also influence our behavior, perceptions, and thoughts. You could even say that sometimes it’s so internalized it can influence our emotions. One of the most important and influential models that tries to explain the development of our morality is Kohlberg’s theory of moral development.

On the other hand, we all have our own moral compass. Hence, it’s always been hard to establish a universal one. This preoccupies many philosophers and thinkers. There are many perspectives. The Kantian perspective of morality is based on group benefit. And there’s also the utilitarian perspective, inspired by individual well-being.

Psychologist Lawrence Kohlberg wanted to take a step away from the content of morality and study its development. He didn’t care about what was right or wrong. He only cared about how people achieved that idea of right or wrong. Through a multitude of interviews and studies, he observed that children build their morality as they get older. Just as it happens with other skills, such as language or logic.

Focused on punishment and obedience

This stage of Kohlberg’s theory of moral development is part of the pre-conventional level. Here we find that the person delegates all moral responsibility to an authority. The rewards or punishments granted by the authority figure indicate the criteria for what’s right and wrong. For example, a child may think that not doing his homework is wrong only because his parents will punish him if he doesn’t do it.

This way of thinking hinders the ability to accept the existence of moral dilemmas. Dilemmas are statements that don’t have a morally clear answer. This is because the authority’s point of view formulates everything, and the person legitimates it. This is the simplest level of moral development. It doesn’t contemplate the differences of interest or intentions of behavior. The only relevant factors at this stage are the consequences: rewards or punishments.

Focused on individualism or hedonism

A new idea appears in this second stage of Kohlberg’s theory of moral development. The idea is that interests vary from one individual to another. Although the criteria to decide whether something is right or wrong still depends on the consequences of the actions, they are no longer marked by others. Now the individual will think that everything that benefits him is right. In the same sense, anything that translates into loss or discomfort is wrong.

Despite the egoistic perspective implied in this stage of Kohlberg’s theory of moral development, the individual occasionally thinks that it’s okay to satisfy other people’s needs. But this only happens when there’s a pragmatic reciprocity or guarantee involved. That means thinking that, if I do something for another person, that person will have to do something for me as well. This stage is a little bit more complex than the previous one because the individual no longer delegates the construction of his morality to authorities. However, the reasoning continues to be simple and selfish.

The conventional phase of moral development begins in this stage. The individual has to abandon the characteristic selfishness of the previous stage since he begins to have increasingly complex relationships. The important thing now is to be accepted into a group. In turn, morality will revolve around this aspect.

For the individual in this stage, the right thing to do is dictated by what pleases or helps others. Here the importance lies in the good intentions behind behaviors and to what extent they’re approved by others. The definition of morality is based on being a “good person,”meaning being loyal, respectable, collaborative, and friendly.

There’s a very interesting test that detects if children have reached this stage.  The test consists of watching two videos:

Children who have already included intention as a modulating variable in their moral judgments will say that the child who acted worst was the one who actually wanted to cause damage, even if the damage itself wasn’t so significant. On the other hand, children who are still in the earlier stages of Kohlberg’s theory of moral development will say that the worst child is the one who caused the greatest harm, without taking into consideration that it was unintentional.

The individual stops viewing morality based on groups. Instead, he starts viewing it based on society. It no longer matters what pleases the groups or people around him. The criteria of what is good or bad are based on whether the particular behavior helps maintain the social order or if it hinders it. The important thing in this stage is the society’s stability and that there’s no chaos within it.

Here we find an individual with profound respect for laws and authorities. They become important since they restrict individual freedom in favor of social order or common well-being. Morality goes beyond personal ties and is related to the current legislation. They can’t disobey these laws in order to maintain the social order.

Focused on the social contract

With this stage, we enter the last level of moral development. A stage that very few individuals reach throughout their lives. Here, morality begins to be understood as a flexible and variable matter. Good or evil exist for the individual because society has created a contract that establishes the moral criteria.

People in this stage understand the reasoning behind laws and, based on that, they either criticize or defend them. In addition, for them, these laws aren’t eternal and can improve. For people or children in this stage, morality implies voluntary participation in an accepted social system. For everyone, it’s better to have a social contract.

Focused on the universal ethical principle

This last stage of Kohlberg’s theory is the most complex of the whole development process. Now the individual creates his own ethical principles. These are comprehensive, rational, and universally applicable. These principles are abstract moral concepts difficult to explain, and they go beyond existing laws. The person builds his morality according to how he believes society should exist and not how society imposes.

An important aspect of this stage is its universal application. The individual applies to others the same criteria he applies to himself. And he treats others as he would like to be treated… or at least he tries to do so. If this didn’t happen, we’d be on a much simpler level, more similar to the individualism stage.

Moral Relativism: Differentiating between Good and Evil
You may have heard the term moral relativism before, but what does it really mean? And how do we know what is good and what is evil? Read more »
Link copied!
Interesting Articles
Social Psychology
Conversation Techniques to Obtain Information

Many mental disorders have their root in suffering. More specifically, in the meaning we give to it. What's most interesting about…

The symptoms of depression are as wide-ranging as they are individual to each person. But they all share one dark reality: chronic pessimism and an inability to keep up with life.…

Sometimes life hits you with really heavy blows. Life's not always light and colorful, but you still have to keep on…

Psychology
Do You Know the Difference Between Anxiety and Stress?

Although anxiety and stress are very similar conditions, they also have their differences. People often use the terms as synonyms,…