Klüver–Bucy Syndrome: The Loss of Fear

Klüver-Bucy syndrome is a great example of the role the amygdala and temporal lobe play in behavior. Read on to learn more! 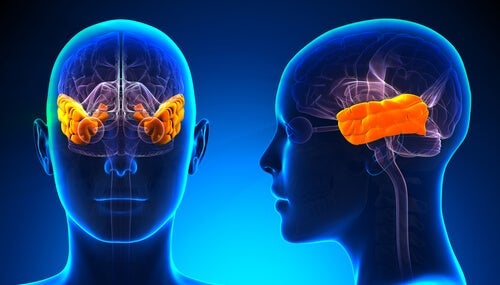 Klüver-Bucy syndrome is one of the most extreme examples of how a nervous system alteration can completely change an individual’s way of life.

Imagine that there’s a piece of your brain responsible for the emotions of fear and rejection. Now, imagine that this piece is damaged and you’re no longer afraid of anything. You may be thinking, “Wow, that must be great”, but, in reality, it isn’t. Although no one likes to experience fear, it’s a necessary emotion for our survival.

This fundamental piece is called the amygdala, and its alteration or elimination can lead to Klüver-Bucy syndrome. This syndrome is characterized by the loss of fear and inhibition, causing risky behavior, disordered diet, and dysfunctional sexual activity, among others.

Heinrich Klüver and Paul Bucy identified this syndrome, hence its name. The doctors removed the temporal lobes of Rhesus monkeys in order to explore their functions. What they found was quite worrisome. Basically, the alteration of this structure produced the following symptoms:

Although the symptomatology in humans is quite similar, there are differences. Compulsive and indiscriminate behaviors take special relevance, and there’s a significant alteration in social exchange. Among the main symptoms, we can identify:

The loss of inhibition

Fear and rejection are usually described as negative, undesirable emotions. This belief, in addition to being very superficial, is meaningless on a biological and evolutionary level. Fear, rejection, and inhibition are emotions that help us interact with our environment in a functional way.

Lacking the ability to interact with others can have very serious consequences, and Klüver-Bucy syndrome is a clear example of that. In fact, it’s the individual’s inability to draw the line between their impulses and actions what seems to produce these symptoms. Moreover, this condition is aggravated by the subject’s inability to recognize the people around them; which in turn incapacitates the person to recover the memory of the emotional bond with their loved ones.

The organic alterations of Klüver-Bucy syndrome

The alterations mentioned above have their etiology in the structural alteration of certain organs of the nervous system:

The structure alteration mentioned above can have different causes and expressions. Among the most outstanding ones, we can identify:

Treatment is as difficult as it is limited due to the incapability to recover nerve tissue. Most treatments require pharmaceuticals in order to appease the maladaptive behavioral symptoms.

First of all, the aim of the initial interventions is reducing the impact of the injuries. An example of this is to try to reverse a hemorrhage caused by a stroke. It’s difficult to predict this syndrome given that the consequences of behavior injuries often start out subtle.

In addition, the advances in neuroscience and rehabilitation techniques are improving these patients’ quality of life. Klüver-Bucy syndrome is a clear example of the impact that alterations in the nervous system may have on our daily life. The patient’s loved ones also suffer since they become unrecognizable to them. For the same reason, therapeutic work with family and friends is very important.

Why Do We Like To Experience Fear?
Haunted houses, survival zombies, and scary experiences overall are now more fashionable than ever. Why do so many of us like to experience fear? Read more »
Link copied!
Interesting Articles
Clinical Psychology
Psychosocial Intervention in Mental Health