Delirium is a clinical disorder that affects attention and cognition. However, its pathophysiology is not well known. 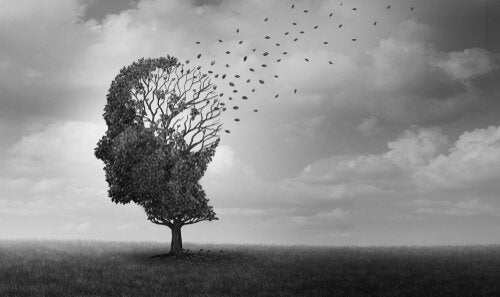 Alzheimer’s disease is the most common cause of dementia. Therefore, the deterioration of the cognitive functions seems to be the core of the disease’s cognitive symptoms. However, other symptoms can play an important role as well. Among many others, we can observe delirium in Alzheimer’s disease.

This neurocognitive disorder changes cognition and attention. Usually, it’s the physiological consequence of a medical complication. Additionally, Alzheimer’s disease consists of a degenerative process characterized by a loss of cholinergic neurons, which are essential for the brain’s proper functioning.

Delirium is a clinical disorder that affects attention and cognition. However, we don’t know its pathophysiology very well. Although scientists systematically identify cognitive deterioration and dementia as the main risk factors of delirium [2, 3], the mechanisms that contribute to this risk increase remain unclear.

According to a 2009 study, the manifestation of delusions can affect cognition. Thus, delirium manifests in 66-88% of patients with Alzheimer’s disease. Thus, these two pathologies go hand in hand. This study showed that delirium in Alzheimer’s disease accelerates cognitive decline in patients.

Drug use causes delirium. However, it seems that many of the conditions that can cause delirium also tend to cause dementia if prolonged. For example, hypoxia or hypoglycemia can cause brain dysfunction and delusions. But if they’re prolonged, they can cause permanent brain damage and dementia [5].

“As with the more familiar types of organ insufficiency, [cerebral insufficiency] refers to what evolves when the function of the organ as a whole is interfered with, for whatever reason… This can be reduced to two basic underlying processes, namely, the failure of metabolic processes to maintain the function of the organ or the loss of [functional units] through death… Delirium refers to the more reversible disorder and dementia to the irreversible disorder… We should regard these states as different degrees or stages of similar processes.”

Therefore, we can say that delirium and Alzheimer’s disease are related to reduced cerebral metabolic rates. Additionally, both pathologies are linked to an altered cholinergic function.

Patients with dementia also manifest structural brain damage. However, in the United States, if during an autopsy it was discovered that a patient who was first diagnosed with delirium actually had the pathological stigmata of Alzheimer’s disease, the diagnosis would change to Alzheimer’s disease.

In Sweden, Dr. Bengt Winbald has already conducted studies on this possibility. However, patients should use cholinesterase inhibitors with caution, mainly because cholinergic agonists can cause bronchospasms or sick sinus syndrome (SSS). With this in mind, doctors should exercise prudence. More studies are needed to rigorously test whether cholinergic treatment protects the brain against metabolic encephalopathy and its consequences.

How Dementia Affects a Family: Handling Conflicts
Dementia is a complex disease that can create a lot of conflict within a family. Let us explain where these conflicts come from and how to minimize them. Read more »
Link copied!
Interesting Articles
Culture
The Importance of Accepting a "No"

It'd be almost impossible for someone nowadays not to recognize Marilyn Monroe's face. She's been immortalized, and shows up on…

Culture
Why Do Women Protest on March 8th?

Why do we protest on March 8th? Lots of people ask that question. Some people say that in the 21st…