Karl Jaspers and the Biographical Method in Psychiatry 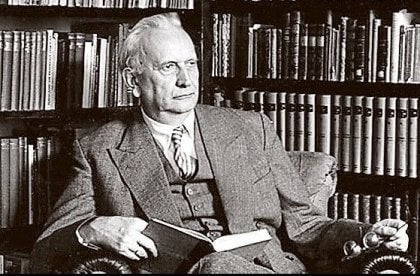 Karl Jaspers was a German psychiatrist and philosopher who had a strong influence on psychiatry and philosophy. Due to this, many experts consider him one of the pioneers of existentialism. Likewise, he’s also famous for having created the biographical method, which has an important psychiatric application.

Jaspers was born in Oldenburg, Germany in 1883. He studied medicine at the University of Oldenburg and obtained his doctorate degree in 1909. He immediately began his psychiatric practice at the Heidelberg University Hospital. Soon, he became interested in learning the way in which mental illnesses were treated during that period.

“To philosophize is to learn to die.”

In 1921, Karl Jaspers became a psychology professor at the Heidelberg University. Little by little, teaching started taking up all of his time. For this reason, he retired from clinical practice. This really saddened him.

Karl Jaspers’ wife was the daughter of a Jewish couple. For this reason, and with the rise of Nazism, he was relieved of his position as a professor. World War II was a trying time for his family. He only got his job back in 1946 when the war ended.

Since then, Karl Jaspers became an important figure during the German reconstruction. In particular, he was one of the people in charge of restoring a normal education. His main goal was to eradicate all Nazis from German schools.

Soon he became disappointed by politics in general. As a result, he decided to go to work at the University of Basel in 1948. The constant disappointments and the war itself definitely influenced his existentialist perspective.

One of Karl Jaspers’ main contributions was the biographical method. Namely, it consists of asking the patient to explain in writing the way they perceive their symptoms. In other words, to record their perception of reality. This method allowed professionals to understand what was happening in their patients’ minds.

In particular, it’s important because it gives value to the patient’s words, which is something that doesn’t happen often in modern psychiatry. Psychiatrists tend to consider their patients’ words products of brain malfunction. However, the biographical method gives some value to this ‘nonsense’ and uses it to comprehend alterations in patients’ perceptions.

Likewise, Karl Jaspers wrote about his patients meticulously. He also described their symptoms as accurately as possible. He looked for elements in his patients’ lives that would allow him to understand their disorders.

Karl Jaspers also postulated the existence of two types of delusions: primary and secondary. Primary delusions are the ones that manifest without an apparent reason. Therefore, they’re autonomous and incomprehensible from a psychological point of view.

On the other hand, secondary delusions manifest as an attempt to explain irregular experiences and are psychologically understandable.

Jaspers published his conclusions in his book General Psychopathology. This book became a classic and laid the foundations for future psychiatric developments.

Jaspers also ventured into philosophy and theology. Books such as Philosophy of Existence or Man in the Modern Age made him really famous. Unfortunately, Karl Jaspers’ books are difficult to get into. He was a writer who you’ll only be able to understand after reading his books several times.

Karl Jaspers was always interested in politics, religion, and philosophy. He wrote several essays on these issues. One of his most interesting ones is The Atom Bomb and the Future of Man.

A lot of his works show how disappointed he was in his country. Due to this, he renounced his German citizenship in 1967. Consequently, he became a citizen of the Helvetic Republic.

He received many awards throughout his life. The most important ones were the Goethe Prize of the City of Frankfurt in 1947 and the Erasmus Prize in 1959. Additionally, he was awarded honorary doctorates by different universities. He died as a Swiss citizen in Basel in 1969.

The Renaissance Of Anti-Psychiatry
Antipsychiatry was a movement which protested against psychiatric methods in the 60s and 70s. Read on to see whether it still has a voice today. Read more »
Link copied!
Interesting Articles
Theories
Genetics and Psychoanalysis

Psychology
Do All Roads Lead to Neuroticism?

Neuroticism is a personality trait that has a significant biological foundation. It makes people with it vulnerable to psychological disorders…

Psychology
How to Train Your Brain to Be More Creative

Are you someone who believes that being more creative is overrated? Or do you think that humanity needs great ideas?…

People with antisocial personality disorder disregard other people's rights. In addition, their contempt usually makes them disrespect those who represent an obstacle in…