What's the Link Between Education and Political Beliefs? 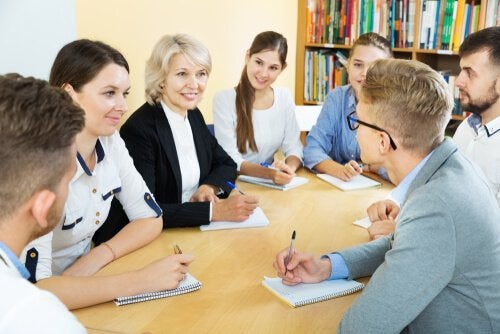 There’s a very common topic in our debates about “political education” nowadays. This topic is what effect our schools and educational institutions have when it comes to influencing students’ political beliefs. One of the theoretical goals of education is to get people to be politically active citizens. But exactly how linked are education and political beliefs? What kind of link is it?

Now we’re going to talk a little bit about those effects through three different lenses. These lenses are: (a) external variables that affect education and political beliefs, (b) direct variables, and (c) indirect variables.

On a statistical level, when we talk about external, modulating, or third variables, what we’re talking about is the external thing that creates a link between two variables. For example, there’s a link between the number of hospitals and jails in a city. It’s a statistical fact that cities with more hospitals have more jails. But the link comes from a third variable that affects both of the others: population.

When it comes to education and political beliefs, there are external things that affect both variables, which explains part of the link. There are a lot, but here are the most important ones: cognitive abilities, personality, and socio-economic background.

The link with cognitive abilities is pretty obvious. Having a high level of verbal expression, abstract reasoning skills, and good memory, among other things, will help you get farther in both formal education and your political capacity. On the other hand, cognitive abilities that go against the educational system you develop them in are like a breeding ground for weak political understanding.

As far as personality goes, the important thing is to understand that certain attitudes can affect education and political beliefs. For example, predispositions towards learning, being curious, and researching have a link to higher academic performance and greater political understanding.

Another key aspect is the socio-economic background. This is because both political life and formal education have social restrictions. A lot of people can’t go to college because they just can’t afford it. Along the same lines, people with a lower socio-economic status don’t usually spend much time on politics. Sometimes it’s because they’ve been directly pushed out. But other times it’s because they spend most of their time trying to survive unstable work conditions.

There’s a huge variety when it comes to formal education. Apparently these different ways of organizing people’s education lead to differences in what we’re calling “political understanding.” This is also proof that the two variables have a direct link. But what are the specific things that affect this link? The most significant ones are curriculum content and educational values.

Curriculum content can have a direct influence on the political knowledge students gain. For obvious reasons, explicitly teaching political concepts helps create future citizens with much better political analysis skills. On top of that, the kind of content also has a big impact on students’ political leanings. In other words, political education that talks about the benefits of liberalism will probably lead to people who identify more with those ideas.

Educating students in values based on dialogue, debate, and critical thinking is essential. It’s the best way to help them develop their own political attitude. There’s a strong link between schools with these principles as their foundation and politically-invested students. But if people receive a close-minded, hierarchical education, they get used to dogma and authority. In the end, those are principles that will always go against a critical attitude towards politics.

There’s a good chance that a person’s level of education will end up determining different parts of their life. There’s usually a big difference between starting your work life after high school and starting it after you finish a Ph.D. A lot of these differences in terms of education also play a part when it comes to people’s political attitudes. Anyway, the most important indirect variables between education and political beliefs are social position, self-image, and opportunities.

In society’s eyes, your level of education usually puts you “above” some people and “under” others. This happens because our society has a ton of stereotypes that lead us to see people differently based on whether they have or don’t have a lot of education. The basic link here is that the higher your level of education, the more political influence (if other variables are the same) you’ll have.

Everything you learn during your academic life also plays a part in how you see yourself. Your self-image will push you towards putting yourself in the same category as other people with a similar level of education. It also happens that the groups of people with higher levels of education are more socially accepted when it comes to politics.

Lastly, a high level of education usually also means having more opportunities. So basically, based on how many opportunities you have, you’ll have more or less chances to do things related to politics.

There are a lot of different perspectives when it comes to the link between education and political beliefs. However, they all give us fundamental information about how to make sure we have politically active, highly competent people in our society. The first thing might be to make sure there are no social or economic restrictions to politics. That way it’s more likely our political systems will be more representative, and that will make it easier to do things for the common good.

What Factors Influence the Way You Vote? A Look at Spain
Social and political psychology have investigated the factors that influence our vote. These studies reveal some interesting facts: it seems that voting stability and identification with a particular party are the main determining factors in an individual's political vote. Read more »
Link copied!
Interesting Articles
Psychology
Your Life Will Change the Second You Stop Waiting

Often we are told that waiting is always worthwhile. That we have to be patient because good things will always…

The symptoms of depression are as wide-ranging as they are individual to each person. But they all share one dark reality: chronic pessimism and an inability to keep up with life.…

Psychology
Aiming to Please Can Be Our Downfall

Close your eyes and imagine the country of Neverland. Wendy is a girl who takes care of the story's characters in…

Psychology
To Do or Not to Do: A Big Decision

Should I do it or not? Should I go, or shouldn't I? Surely these questions have come up in your…