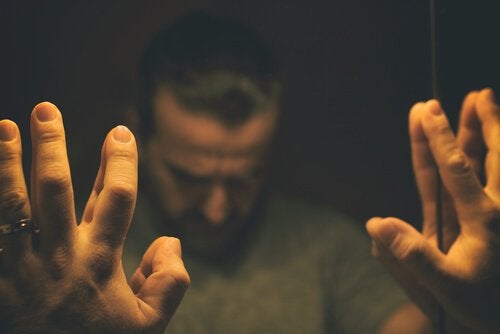 Irritable Man Syndrome is defined as a state of hypersensibility, anxiety, frustration, and anger that occurs in men. It is associated with biochemical changes, hormone fluctuations, stress, and loss of the “masculine identity”.

Though not well known, this syndrome is very common. The term is new, but it reflects a reality related to hormonal balance and a socioemotional dilemma that men have to deal with in this stage of life.

In 2002, the Scottish scientist Gerald Lincoln from the Human Reproduction Unit of the Medical Research Council, shared the results of a study that measured the level of testosterone in male animals over several years. It showed that the progressive decrease in this hormone made the animals more irritable and sensitive, and less sexually communicative.

Jed Diamond decided to study this phenomenon precisely because there was a lack of research on the subject. In 2004 he published a book called The Irritable Man Syndrome, which showed a problem that he had noticed for years in his clinic among men between 40 and 50 years of age.

The case studies pointed to a lack of energy and motivation, decreased sexual desire, significant mood swings, irritability, depression, and aggression. He used Grumpy, the dwarf from Snow White, as an example, which is why they call also call the condition “Grumpy Man”.

According to Dr. R. Petty, a doctor at Wellman Clinic in London and an expert in the study of this psychological condition, Irritable Man Syndrome affects 50% of men over 45. It often isn’t properly diagnosed, so treatment is either non-existent or ineffective because of a lack of understanding. Experts in the subject believe that hormone therapy will soon be an established treatment for men just like it is for women.

From the description of the problem, it might seem like this is the same as the famous “mid-life crisis”. It definitely seems like it, but we shouldn’t use the similarity to trivialize the emotions and feelings of men who are suffering.

We have to take into account that the Irritable Man Syndrome isn’t yet an official diagnosis. It is currently being studied in order to have a better scientific and popular understanding of this group of symptoms which affect some men during a certain point in their life.

This stage is full of sociopsychological and physical changes, so we would hope that the level of acceptance and adaptation will be treated, worked on, and not disregarded.

We shouldn’t throw up our hands and worry about because a “new” condition was created. This reflects the reality we already know. The goal of this article is simply to help us to be aware that men’s physical and emotional health needs attention and care.

What is the source of irritable man syndrome? 5 key factors

The origin of this group of symptoms seems to be influenced by five different factors that add up and feed off each other to cause an unpleasant psychological and physical state for men.  Let’s take a closer look at the factors that create this dilemma.

Diamond describes testosterone beautifully, citing Theresa L. Crenshaw, author of The Alchemy of Love and Lust.” In her words “testosterone is the young Marlon Brando- sexual, sensual, seductive, dark, with a dangerous undertone.”

It’s important to keep this definition in mind because testosterone is also partly to blame for behavior such as aggression, competitiveness, and even violence. According to Diamond “we know that men with excessively high levels of testosterone can be irritable and aggressive. But recent shows show that the majority of hormone problems in men are caused by levels of testosterone that are too low.”

Another substance responsible for this syndrome is serotonin. Certain studies show that one of the most common causes of low serotonin is diet and eating habits. Judith Wurtman and her colleagues from the Massachusetts Institute of Technology found that a diet high in protein and low in carbohydrates can cause greater irritability in men.

This study found that men often confuse their cravings for healthy carbohydrates (in vegetables like potatoes, rice, corn, squash, etc) with cravings for meat-based protein. “Eating protein when we need carbohydrates will make us grumpy, irritable, or antsy”, the authors point out.

In line with these studies, it was also found that alcohol consumption initially increased serotonin levels, but that chronic consumption drastically decreased serotonin. This can cause depressive states, carbohydrate cravings, sleep disorders, and irritability.

For our bodies, stress is synonymous with change, whether it is good or bad change. A move, a new job, a growing family, all of these can be wonderful and positive changes. Nevertheless, these changes can cause tension. Tension leads to other emotions like anxiety or irritability.

Society is changing, but the education and information we currently receive about gender roles that we “must” fulfill are confusing. In an environment filled with double standards, it makes sense that is difficult to act and to be pro-personal freedom.

5. Failure or Imperfection of Love

Irritability increases when we are not connected with our partner. As we know, stress, loss of communication, misunderstanding, and personal pain are sadly very common and even routine in relationships. These combined factors cause emotional distance with our partners.

Note to the reader: If you’d like to learn more about this subject, we recommend you read “Irritable Man Syndrome by Jed Diamond.

The Latin saying "mens sana in corpore sano," which translates to "a healthy mind in a healthy body," is more relevant now than ever. New studies have tackled this subject, concluding that the duration and…

Psychology
Can New Technologies Be Used as Therapeutic Tools?

New technologies have changed our customs, habits, and ways of life. Today, we can't even leave the house without our…

Psychology
Deprax: Uses and Side Effects