Friendship for Women Is Different 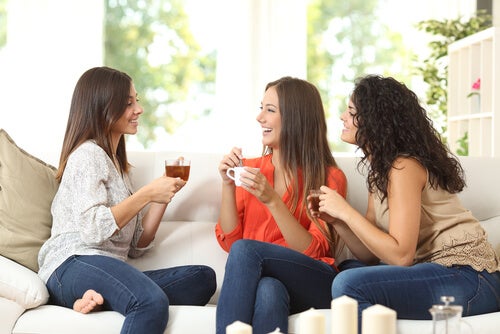 Friendship for women women is not the same is friendship between men. Female friendships are highly important to women. We talk about different things, deeper things.

Time and distance don’t matter to us; once a friend, always a friend. Even if it’s been years since we’ve seen each other, the affection and trust we had for each other never really disappear. We form sisterhoods that make us stronger. We carry it in our collective DNA; it’s always been there.

“Women’s friendships are one of the reasons women live longer than men. We talk about different things, we delve deep, we go under — even if we haven’t seen each other for years. There are hormones that are released when women are with other women that are healthy.”

A long time ago, women shared much more with each other than they do now. They took turns caring for each other’s babies, ate dinner together, and shared a sense of intimacy that only comes from the bond of deep friendship. This shared life was a source of strength and comfort upon which they built their daily lives. Women learned from each other, took care of each other, could count on each other.

Today, women are much more isolated from one another. The opportunities to meet up are much more limited, but that doesn’t take away the need to feel connected. In fact, women who don’t spend much time with their friends, or who lose contact with them, feel a huge emptiness, which is hard to fill with anything else.

“Friendships between women are special. They shape who we are and who we are yet to be. They soothe our tumultuous inner world, fill the emotional gaps in our marriages (or partnerships), and help us remember who we really are.”

The power of female friendships

The real benefits of friendship are immense. Friends make life better. Studies show that friendship has a greater impact on one’s physical and psychological well-being than any other familial relationship.

Female friendships have a huge impact on women’s physical and psychological well-being, since we share a special bond when our souls meet. Through these friendships, we find the support and encouragement we need to overcome our problems and limitations.

According to researchers, the release of the hormone oxytocin is, especially for women, the panacea of friendship, and by extension, health in general.

“Female friendships that work are relationships in which women help each other belong to themselves.”

One important study found that women respond to stress differently than men, which has important implications for health. When people experience stress, the fight or flight response is activated, which releases hormones like cortisol.

Oxytocin is another hormone secreted by both men and women in response to stress. In women, it calms the fight or flight response and pushes them to protect and take care of their children and meet with other women.

It works like this not only in human beings, but also in many other species. When women involve themselves in the care of their loved ones or in their friendships with other women, they release oxytocin, which makes them more capable of fighting against stress and calming themselves.

Men, on the other hand, release high levels of testosterone when they’re affected by stress, which reduces the calming effects of oxytocin. That’s why they’re more prone to reacting angrily and violently. However, women produce estrogen, which enhances the effects of oxytocin and pushes them to seek social support to release said hormone.

This is apparently the main way men and women differ in their responses to stress. and also one of the main differences between male and female behavior in general.

It’s worth noting that one study on breast cancer found that women who don’t have any close friends were four times more likely to die from the illness than women with 10 or more friends. Interestingly, the amount of closeness and contact the person had with their friends was associated with survival. Merely having friends was a protective agent against cancer!

7 Benefits of Friends, According to Science
Friends are one of the greatest sources of support we will find throughout our lives. Anyone who has had the good fortune of having them knows it. Read more »
Link copied!
Interesting Articles
Psychology
Superiority: A Characteristic of Insecure People

We all know those people who present themselves as very secure and brag about themselves. With their heads held high, they…

Few people would define themselves as jealous - much less than those who actually are, that's for sure. People fail…

Adolescence and young adulthood is quite unique in many ways. Not only because we go through it just once, but…

Psychology
We Know What We Are, But Not What We May Be

I look around and I see people without dreams or hopes, stuck in exhausting life situations that don't make them happy... …

Interesting Articles
Therapies
Art Therapy as a Treatment for Psychosis