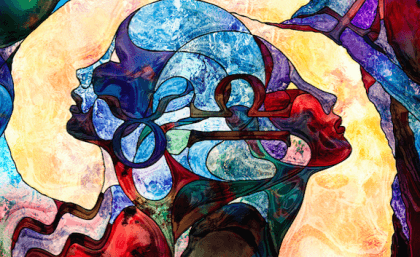 Intuition and instinct aren’t the same things. While the latter guides the behavior that helps you survive, the former describes a more complex human sense. Intuition gives you an internal voice that helps you make better decisions. They both help you respond better to life’s daily challenges.

Would you like to understand the difference between intuition and instinct? We’ll give you an example to help you using two wonderful literary characters. Robinson Crusoe was a brave sailor from York who was stranded on an island for 28 years. He used his most basic instincts to survive a perilous and complex situation. Sherlock Holmes, on the other hand, is the best example of a mind trained to make use of its police intuition. His deductions are quick and precise. With his excellent and fine-tuned intuition, he can solve the most challenging riddles.

“There are some situations which men understand by instinct, but which reason is powerless to explain.”

The most interesting thing about instinct and intuition is that you use both of them every day almost without realizing it. However, only intuition is a human characteristic. Knowing how to use both effectively and to your advantage can be highly beneficial. This will help you be safer and have a better understanding of how to manage your fear and stress. Not only that, but they’ll help you take advantage of your experience and skills to have a more meaningful life. Let’s delve deeper into this idea.

Intuition and instinct: Between biology and perception

Intuition and instinct aren’t the same, even though we often use the terms interchangeably. It’s also very common to use them in contexts when your emotions point you in one direction or another. Phrases like “My instincts are telling me…” and “My intuition says…” are clear examples of this small conceptual error. Clearing up this confusion will help you have a better understanding of just how instinct and intuition can be beneficial.

From a biological point of view, instinct is innate behavior. It encompasses all of your internal needs and behaviors that allow you to survive in your surroundings. Instincts like self-preservation, protection, sociability, reproduction, cooperation, and curiosity are basic traits that define humans as well as other animals.

The concept of instinct became curiously undesirable in the twentieth century. It was the link that tied us to the primitive version of ourselves. People thought that it was better to repress or hide this aspect of ourselves with other labels. Abraham Maslow, among others, started to popularize terms like “desire” or “motivation” as a way to avoid talking about instinct.

This idea has changed significantly in the twenty-first century. Society once again appreciates intuition and instinct. The reformulation of the idea of instinct is especially interesting. People like Dr. Hendrie Weisinger, an influential clinical psychologist and author of the book The Genius of Instinct, explains that our instincts aren’t dark or primitive. They aren’t something we should repress.

If you learn to use your instincts to your advantage, you’ll deal with stress or fear in a better way. What’s more, cultivating instincts like compassion, caring, and kindness allow you to enrich your surroundings and make life more meaningful. After all, compassion and kindness exist in everyone. Though you may find that hard to believe, a study by Dacher Keltner at the University of California, Berkeley revealed just that.

Some people think that intuition is a set of feelings that give us clues about something. Well, intuition isn’t some kind of magic process or sensorial perception. Intuition would be better defined as “cognitive perceptions”. Carl Jung himself said that intuitive people are those who can anticipate certain events or situations by using their own unconscious information.

In conclusion, we now know that intuition and instincts don’t share the same origin. Instinct has a biological foundation, while intuition is the result of our experience and the development of our conscious. Nevertheless, they both have an undeniable common goal: to allow us to be better adjusted to our reality. They help us survive, anticipate risks, and live a more connected and satisfying life. Listen to your intuition and your instincts and make them work in your favor!

After a Disappointment, It’s Hard to Follow Your Intuition
You've probably gotten upset with your intuition on many occasions after it leads you to a dead end.  Read more »
Link copied!
Interesting Articles
Personality Psychology
When Narcissists Think They Know More than Experts

Psychology
Do You Choke Up in the Face of Pressure?

Sometimes, just a look can cause you to lose your concentration and judgment. The pressure of a supervisor, a teacher,…

You might think you know what mind control looks like, but it's not always how it's portrayed in movies. Have you ever felt that you were being exploited at work?…