The Red Book, How Carl Jung Saved His Soul 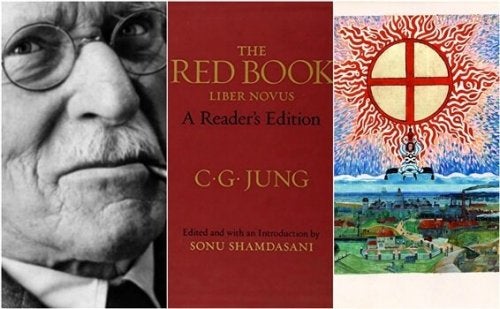 They say that Carl Jung’s The Red Book contains within its pages a mind that aspires to roam the underworld and rescue his soul. His work was intellectually legendary – enigmatic and fascinating, to many the Holy Grail for the irreverent, to others just the ravings of a madman who condemned all of humanity in a matter of seconds.

If the world of psychology has any secrets left, they have to do with this manuscript, written by Carl Gustav Jung between 1914 and 1930. It’s an unfinished book that’s prophetic, mystic, and psychological. It also features shocking illustrations depicting deities that are confused with ancestral demons.

There are few who venture to try and ascribe a logical and rational explanation to what the father of analytical psychology was going for with his Liber Novus. However, maybe he wasn’t going for anything. Maybe you don’t have to look with scientific a work that, in reality, could have been a cathartic exercise for the author, a personal therapy where his mental demons were allowed to roam free during a moment of existential crisis.

Perhaps it was that, and nothing else. However, there’s an extra piece of the puzzle. After Jung died, his family guarded the manuscript distrustfully, keeping it under lock and key in a house in Kusnacht, in the suburbs of Zurich. They allowed no one to go near it – not the students, not Jung specialists. Later, in 1984, they moved The Red Book or Liber Novus to a bank. It wasn’t until 2009 that Ulrich Hoerni, Jung’s grandson, allowed the manuscript to be published. This long-awaited event left experts and fans breathless and speechless.

Carl Jung‘s The Red Book: A mind in crisis

“The spirit of the depths has subjugated all pride and arrogance to the power of judgment. He took away my belief in science, he robbed me of the joy of explaining and ordering things, and he let devotion to the ideals of this time die out in me. He forced me down to the last and simplest things.”

This is one of the paragraphs in the first chapter of The Red Book. For those who are familiar with Jung but haven’t looked at this work, it’s fair to say that the first thing you’ll notice is the text’s strangeness and contradiction. Reading it gives the sensation of holding a savage world in your hands. It’s almost like a sacred and prohibited Bible, bound in red leather, filled with pretty cream parchment paper, covered in golden letters.

It’s interesting to point out that, when it was published, many Jung experts (like Andrew Samuels) were quick to say that Jung suffered from no mental illness. Some, however, said that this book was no more than the result of a psychotic break Jung went through after his arguments with Freud.

That wasn’t the case. In reality, Jung went through a profound personal crisis. He started a new chapter in his life, which led to an intellectual evolution. He began writing The Red Book in 1914, just at the end of World War I, when he was working as a doctor and psychiatrist in Switzerland. He was deeply disappointed by humanity and brutally skeptical of the rational science of his time.

The cathartic end of The Red Book

The Red Book is, above all, an intimate diary. We run into difficulty when we try to untangle the mess of symbols and codes and alchemy. This is because of the simple fact that no one can remove the shell and dissect the body that held this foreign mind. Even more, this mind that was one of the best examples of the oneiric universe.

Within these pages, Jung was exploring his own psyche and his relationships with his unconscious, all within a profound architecture where he, of course, was a privileged explorer. He used the psychonautic technique to give each page its form, using active imaginings he gleaned from his meditations, where he could allow images to flow freely. Those that lingered the longest made their way into illustrations and descriptions.

This is how all of the archetypes that would eventually develop first emerged. His more turbulent worlds come out at times as well, like that shadow that we often don’t recognize as our own, but that shows the shape of our true selves.

One curious and magnificent thing happened during the publication of The Red Book in 2009. Many of Jung’s former patients released testimonies. These people did, in fact, understand the purpose of this book.

While some shake their heads at this literary ocean, filled with trees of wisdom, reptilian brains, famished dragons, and kundalini snakes, others remember the advice Dr. Jung would often give:

“I should advise you to put it all down as beautifully as you can – in some beautifully bound book. It will seem as if you were making the visions banal — but then you need to do that — then you are freed from the power of them… Then when these things are in some precious book you can go to the book & turn over the pages & for you it will be your church — your cathedral — the silent places of your spirit where you will find renewal. If anyone tells you that it is morbid or neurotic and you listen to them — then you will lose your soul — for in that book is your soul.”

Wise advice from a great teacher, whose shadow and intellectual legacy still delight and amaze us today.