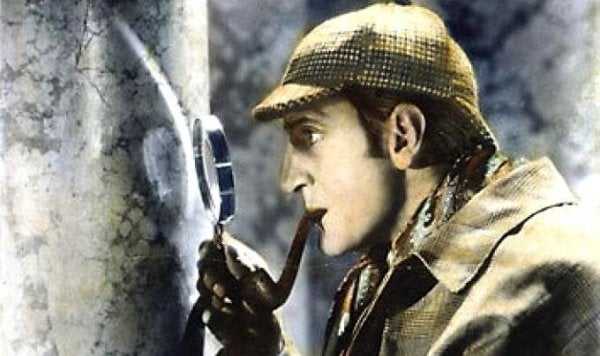 If you want to learn to think like Sherlock Holmes, you have to get into his mind. That is no small task, considering that his is one of the most lucid minds in the history of literature. Conan Doyle endowed his character with a famous method of thinking. It required attention, discipline, and a bit of natural skepticism. Not to mention an inquisitive, curious, and energetic way of looking at the world that all of us could learn to emulate with some work.

The forensic surgeon Joseph Bell inspired Conan Doyle to create his famous Baker Street character. Bell said that any diagnosis must be based on three basic steps. And this is true whether the context is forensic, scientific, or any other. The three steps are: 1) carefully observe, 2) astutely deduce, and 3) confirm with evidence. Learning this strategy and putting it into practice isn’t something you can do in a day or two. It requires training the brain and understanding all of the cracks and crevices of your mind.

“The day that Sherlock Holmes decided to specialize in crime, theater lost a great actor and science lost a sharp thinker.”

The Scottish doctor that Conan Doyle had the good fortune to meet was always very proud to be the author’s inspiration. He even wrote the prologue to some of Conan Doyle’s novels. And Conan Doyle wasn’t only inspired by Doctor Bell’s analytic methods. He was also attracted to the personality and reasoning of another famous detective named C. Auguste Dupin. Dupin was a detective created by Edgar Allan Poe in his book The Murders in the Rue Morgue.

Arthur Conan Doyle knew very well what he wanted when he defined his character’s personality traits one by one. He shouldn’t be an easy man, he didn’t want to write the classic hero. He had to have a dark and contradictory side, as well as a keen sense of justice. Above all, his detective needed to have the most brilliant mind of all time. There is no doubt that Conan Doyle achieved his goal…

There is nothing worse than neglecting to question ideas or thoughts. No greater enemy than having a passive attitude towards the events and information around you. What’s more, if you don’t learn to question your own thoughts and attitudes, you will rarely be able to see beyond the smoke screen.

To learn to think like Sherlock Holmes, you have to go through a preparation phase. This step is meant to strip you of any prejudices. You also have to stop taking other’s opinions and reasonings at face value. They are not, after all, irrefutable universal truths. Learn to filter through the information you receive and be skeptical. Be curious and defiant. Learn to see past the end of your nose and control any automatic reasoning that you tend not to question.

When Sherlock Holmes gets a note, he doesn’t limit himself to just reading the words. In fact, sometimes the text is the least important part. The “Holmesian Method” involves developing inclusive thinking. Here, everything matters and you can glean information from anything. Thinking like Sherlock Holmes means remembering that every object, face, tone of voice, trivial gesture, or seemingly nondescript setting provides much more information than you would think.

Remember, for example, The Adventure of the Blue Carbuncle. With an old hat and a goose, Holmes astutely solves one of the most complex cases that Conan Doyle ever created.

Anyone who reads Sherlock Holmes understands this crucial aspect of his personality. The Baker Street resident goes from deep inactivity and lethargy to excitation and movement when something captures his interest. It is then that his brain focuses and stops its lazy and distressing wandering.

Holmes won’t accept cases that aren’t stimulating enough for him. Nor will he take on clients he doesn’t trust. His mind is selective. He saves his time and energy for things that align with his values and his interests. So, he only accepts cases that motivate him and truly challenge his abilities.

4. For better understanding, sometimes you have to take a step back

To learn to think like Sherlock Holmes, you should apply another of his techniques – imaginative thinking. Holmes has many moments in which he juggles countless facts, loose ends, testimonies, and imprecise and contradictory feelings. He needed to organize them to be able to analyze them and come up with plausible theories to explain what happened.

To do this, he didn’t hesitate to hole up in his room and cut himself off from the world. His pipe and his violin helped him retreat to his mind palace and refine his deductions. Sometimes, distancing yourself from the problem is the best way to help you think it through. Often the key is to stop collecting new information and work with what you have.

Sometimes you get overconfident and tell yourself that you won’t forget such and such detail or piece of information. That is a mistake. Turning to a diary for help is a smart strategy. Writing your thoughts and ideas down on paper is a great way to remember information. Not only that, it helps you reflect, channel ideas, and compare concepts.

And don’t forget that Holmes himself, as well as the scientist Andre-Marie de Ampere always carried a pen and paper. Ideas are free, they come and go as they please. Consequently, it’s important to be prepared to capture them when they come along.

6. To learn to think like Sherlock Holmes, seek out mental challenges

There is something curious about Sherlock Holmes’s character that you should keep in mind. His deductive abilities, his capacity for analysis, and his mastery of connecting apparently unrelated events were not inherent skills.

The one who possessed a truly exceptional intelligence was his brother Mycroft. Everyone described him as the best mind in England. Nevertheless, his incredible brain was a contrast to his passive attitude. He was a man of strict routine and didn’t like action or fieldwork. He gladly left those tasks to his younger brother. Holmes had a restless mind that needed constant stimulation, challenges, and mystery. Those puzzles challenged and “fed” his mind at the same time. He used them to hone his abilities as a detective.

“I am a brain, Watson. The rest of me is a mere appendix.”

7. Use your abilities for good

One thing that Doctor Watson often pointed out about his dear roommate was the fact that Holmes used his amazing abilities to do good. If the opposite had been true, Sherlock Holmes would have been on the same team as that other brilliant mind – Professor Moriarty.

This leads us to reflect on a particular idea. Our intelligence and our cognitive abilities need some kind of purpose. They need motivation, a reason to keep training and improve our reasoning and reflexes.

Thought without motivation or inspiration isn’t good for much.  In fact, Holmes tended to turn to the “6% cocaine solution” when he went for days without cases. He had a difficult time during those days that passed slowly like London fog and his mind had no purpose or goal.

Learning how to think like Sherlock Holmes is undoubtedly an excellent idea for our everyday lives. All the same, we can always fall back on the magnificent Holmesian canon to inspire us. Dozens of adventures can teach us a little more about the methods and strategies of one of the most loved and admired characters in the history of literature. Not to mention he is one of the few characters who had to come back to life because of popular demand, against the wishes of his author.

Emotional Reasoning – When Emotions Cloud Our Thinking
Emotional reasoning is a cognitive process by which we shape an idea or a belief based on how we feel. It's possibly the most common form of self-sabotaging. Read more »
Link copied!
Interesting Articles
Psychology
Uchronies, the Possibility of Changing the Past

''In 1933, US president Roosevelt was assassinated and the country did not recover from the Great Depression. The United States…

People use all kinds of prescription drugs nowadays. For example, taking a pain-reliever to avoid getting a headache is considered…

Psychology
Engrams: Traces of Experience in Our Brain

When we talk about engrams, we refer to the traces experience leaves in our brains. Hinduism already defined the process…

Psychology
Do You Choke Up in the Face of Pressure?

Sometimes, just a look can cause you to lose your concentration and judgment. The pressure of a supervisor, a teacher,…

Psychology
The Dissatisfaction of Perfectionism

Perfectionists look for success relentlessly, but nothing seems to be good enough for them. They often feel dissatisfied due to…

Imagine an old man appearing, with a friendly bald face, smoking a pipe, telling you that "cellphones help you stay…