Internet Trolls and Their Aggression 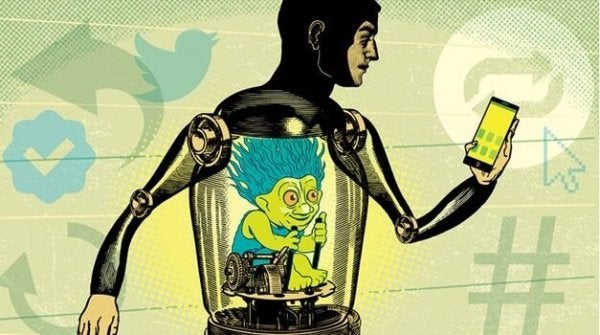 Internet trolls use aggression to trigger an emotional response, provoke, antagonize, or simply harass other people. Experts believe that those who engage in trolling are narcissists. They have low self-esteem and are motivated by revenge or simple boredom.

These days, there’s a lot of research on this phenomenon. For better or worse, our society has gone digital in a way that has changed how we related to each other and even how we perceive reality. The subject itself is also interesting from a psychological and anthropological point of view.

In our social networks, there are two types of Internet trolls: the funny, ironic ones and the flamers who love starting arguments and offending people.

The way we communicate has changed

Until recently, we only interacted with people we saw more or less often. That fact encouraged a principle of cooperation that made living alongside each other easier. Respect and a sense of cooperation have helped our species survive. However, we’re losing both of these things lately.

Most of us now live in cyber bubbles where we can interact and relate to people we don’t know. We get in touch with and follow people we’ll never see, but whom we know things about on a day-to-day basis thanks to social networks. The ease with which we’re able to do things anonymously brings out the worst in a lot of people. We can attack and even harass others online. We can encourage others to get involved and, thus, destroy a person both socially and emotionally.

The anatomy of a troll

Trolls come from Scandinavian culture. A troll was an anthropomorphic creature that usually lived in hillsides, at crossroads, or under bridges. Their only purpose was to attack humans, steal from them, or take their children away. Today, trolls live in the shadows on Internet forums, social networks, and comment pages. They get people riled up and make people angry.

According to a Stanford University study, anyone is capable of behaving like a troll. If the conditions are right, any good person can show their worst side online. However, the International Journal of Cyber Behavior, Psychology, and Learning does not share this opinion. Dr. Laura Wydyanto explains that trolling is a form of abuse. She believes that those who troll often share some common psychological traits:

Analysis of Internet trolls and their typologies

How can you defend yourself against Internet trolls?

No one is immune to getting harassed by a troll. However, the most alarming and noteworthy thing about trolling is that it behaves like an infectious chemical agent. This is because we don’t know why a troll causes a reaction in other people. After the troll’s initial comment, a whole army of people seems to come from the woodwork to say even worse things. Trolls, after all, know how to drag others into the fray. That’s because the more extreme the opinion or insult, the bigger the impact and the more debate there’ll be.

People often say that a troll will die if you stop feeding it. They feed off their own ego and the emotional impact that they have on others. That’s why plenty of people choose not to respond to a troll. Nevertheless, as we mentioned before, someone will always fall prey to the troll’s game. Because, even if you stay silent, trolls rile everyone else up and create a sort of battle between mini-trolls.

That’s why we must speak out and report Internet trolls. Trolling is illegal and punishable with jail time. If you’re a victim of trolling, there’s no time to waste. Don’t hesitate to report the person who’s harassing you.

Link copied!
Interesting Articles
Psychology
Greed Is a Problem of the Heart

Possessiveness is closely linked to jealousy, which is in charge of destroying relationships, but is also a slowly self-destructive feeling.…

Psychology
Agoraphobia: The Fear of Fear

A lot has been written and spoken about agoraphobia. Many times this disorder is mistakenly defined as "the fear of open spaces or spaces that are very crowded." This is…

For those who still haven't heard of it, American Horror Story is an American series created by Ryan Murphy and…