12 Angry Men: How a Leader Can Change a Group's Opinion 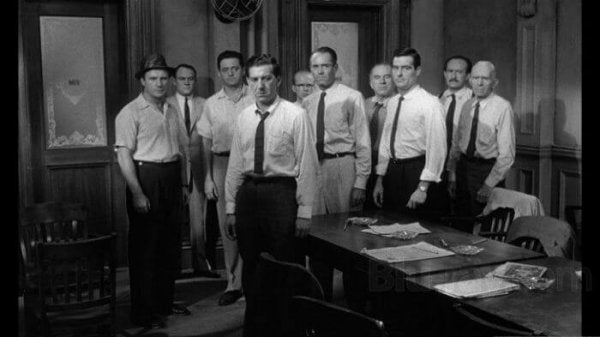 12 Angry Men is a drama film written by Reginald Rose. Initially, he wrote the script for television. However, producers later adapted the script for cinema and theater.

Reginald Rose grew up in the United States. He dedicated his life to writing screenplays, particularly for television, during the 50s. His screenplays reflected the growing interest in social and political issues. The screenplays generally depicted some type of controversy with a clear and precise approach to the reality of the time.

His most well-known and successful work is 12 Angry Men, where he recounts the human being’s complexity. He dives into this subject particularly as the characters grapple with their feelings and realities while they have to remain as objective as possible. The television series premiered in 1954. Later, Rose adapted the screenplay to theater. After it was a great success in theaters, Sidney Lumet recorded and directed the film in 1957. This is a film that best represents the collision of television, theater, and cinema.

This movie has a complex plot, but the thread that ties it all together is the jury composed of 12 very different men. Together, they must reach an agreement on whether they consider the accused to be innocent or guilty. The suspect is accused of homicide and the jury’s ruling will have significant consequences.

At the beginning of the movie, a judge is finishing an 18-year-old boy’s trial. The 12 men must deliberate and decide if he’s guilty of killing his father. If they find the defendant guilty, his punishment will be the electric chair for the charge of first-degree murder.

At first, it seems as if their deliberations won’t be too long and that they’re going to decide that he’s guilty. However, one of them isn’t so sure and he maintains what he calls “a reasonable doubt“. This doubt, says the man, is one that should make the men reconsider their heavy accusations. This man who opposes the way the rest of them think presents his arguments. He asks for a new vote to see if anyone else has changed their mind. After he asks for a vote, it becomes clear that the group is beginning to have some doubts.

The group then decides to reconsider their decision and to analyze the case a bit more. They discuss the evidence, the statements the witnesses have made, and then draw new conclusions. Throughout the course of this deliberation, these 12 angry men discuss their fears, their life experiences, and expose their personalities. They also reveal the prejudices they have.

12 Angry Men: The leader’s ability to change a verdict

Reasonable doubt arises when all the members of the jury want to settle the deliberation quickly, reaching a consensus of guilt. In a quick and thoughtless first vote, all but one of the jurors declare the accused guilty of the crime.

This is the point when the dissenting member’s leadership ability shines through. The leader eventually makes the other men doubt the accused’s guilt. This character lights the wick of deep thought. Let’s take a moment and use this character to talk about the characteristics that make a good leader.

A leader must know how to listen

Throughout the course of this film, the protagonist listens carefully to each and every one of the opinions. He doesn’t fall into the temptation of interrupting the discourse and the rest of the jury members. The simple act of listening allows you to gather information and identify problems, make decisions, and resolve conflicts.

He makes his teammates feel important and integrated. This makes it easier for them to be committed. This commitment allows the men to become emotionally involved in the debate.

A good leader is assertive

The jury members want to settle the matter as soon as possible and get on with their lives. However, the leader fights against this trend as he expresses his disagreement. Facing the majority isn’t an easy thing to do. By doing so, you expose yourself and become vulnerable.

In the same way, a leader expresses their true feelings and opinions regardless of what others are thinking. Leaders are aware of their responsibility and take it on, even if doing so puts them in an awkward position, In addition, a good leader is able to remind their group that the decisions they make as a group have consequences.

A leader directs, coordinates, and moderates

The main character moderates the discussion between the jury members. He manages and resolves conflicts to ensure that communication is fluid and effective. He also knows when to reflect on himself and the way he’s communicating.

A leader should be honest

Our leader in the film isn’t closed off or secretive. In the first vote, he votes innocent because he wants there to be an open debate. He doesn’t necessarily want to argue with his counterparts, but he wants to do what he thinks is right. He’s aware that if he doesn’t speak out against the majority, there will be no debate and they’ll sentence the boy to death.

In this sense, he’s honest about his feelings. He doesn’t keep quiet. Rather, he expresses his doubts. He’s also honest in the fact that he’s not sure what to think and that’s why he wants to hear the other men’s opinions. This is how he begins to understand others. His sincerity is his best tool to solve doubts or conflicts.

In the course of 12 Angry Men, we can see how the leader sees the opportunity to give his opinion and make the rest of the group doubt. With great power and his ability to analyze people, he tries to give the group a fresh take on the facts of the trial.

It’s undeniable that due to the reasonable doubt that arises, the verdict has to be innocent. However, it’s difficult to discern between the probable and the possible. This leaves the spectator with the freedom to believe if the movie ended in an innocent or guilty verdict.

Anakin Skywalker’s Psychology
Find out more about Anakin Skywalker's psychology in this compelling article where we analyze one of the most complex characters in movie history. Read more »
Link copied!
Interesting Articles
Culture
Which Are the Most Resilient Countries?

Culture
The Flynn Effect or Why We're Getting Smarter

Living with albinism isn’t easy. This hereditary metabolic disorder is characterized by the absence of pigmentation (melanin) in the skin,…

They say a picture is worth a thousand words, but words are priceless all on their own. There are words that…