Let's take care of sad, irritable, or withdrawn children. Believe it or not, they put up a front that hides anxiety and depression, which manifests itself through internal symptoms, such as isolation or loss of motivation. 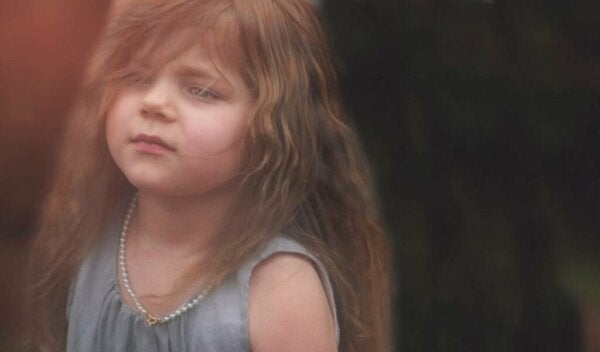 Children can sometimes show behaviors that are unrelated to their character. For example, extreme shyness, worry, fears, phobias, and mood swings. In this sense, understanding, knowing, and detecting the first indicators of internalizing disorders can help treat and prevent childhood depression.

When it comes to child behavior, there’s one fact that almost never fails. The most restless and rebellious children are the ones who always call our attention. Whether it’s at home or at school, it’s pretty much impossible not to pay attention to the boy or girl who’s defiant and who rarely ever sits still.

Now, this type of profile falls within what we define as externalizing disorders. Basically, they respond to their environment by making themselves noticeable. On the contrary, there are children who are far from being problematic. These individuals don’t like it when other people notice them. They’re the ones who like to sit in the back of the classroom and keep to themselves at all times. They avoid attention no matter what.

Moreover, teachers rarely ever pay attention to them. In a way, professors enjoy these children’s quiet personalities, especially in a classroom full of noisy, reckless kids. Nonetheless, neglecting these children or teens can have very serious consequences. Although they hide behind their elusive and serene appearance, in reality, they’re crying out for help.

“Yes, he’s always next to me, he never leaves my side.” “He’s shy – he’s one of those children who’s afraid of everything.” “She’s constantly going to the hospital; when it’s not a stomachache, it’s a skin rash.”

These types of comments are common in parents of children with internalizing disorders. In general, it isn’t easy to see that what’s behind this behavior is actually a psychological problem. This issue arises to the surface especially when a child who wasn’t cared for in childhood reaches adolescence.

We all know how difficult adolescence can be. This stage is full of changes, which makes the individuals vulnerable. Said vulnerability leads this disorder to manifest itself. This is when self-harm and even suicidal ideation can appear. A piece of research conducted at the University of Pennsylvania, Philadelphia, highlighted the relevance of developing early treatment and prevention programs for internalizing disorders.

Furthermore, the authors of this study noted that children with undetected psychological disorders are more likely to suffer from academic problems and social exclusion. However, the most serious issue is the risk of suicide. According to WHO data, suicide is the third leading cause of death among subjects between 15 and 19 years of age.

What are internalizing disorders?

According to Achenbach, Edelbrock, and Howell (1987), the mental disorders that affect children can be divided into two typologies. Firstly, we have externalizing behaviors (aggressiveness, behavior problems, disobedience, and inattention, among others). Secondly, there are internalizing behaviors, which refer to manifestations related to somatization due to anxiety, stress, or depression.

Internalizing disorders are very common in childhood and manifest as follows:

Where do internalizing disorders come from?

What lies behind this internalizing symptomatology are anxiety disorders and depression. These realities tend to go unnoticed in childhood and youth for two reasons. First of all, adults tend to attribute them to the individual’s age. Think about it. It’s quite common to think of pre-teens as more passive and introverted, whereas one usually thinks of teenagers as rebellious and reckless.

On the other hand, it’s vital to bear in mind the family aspect. Many of the children with this type of disorder come from troubled environments. In short, their parents didn’t have assertive parental strategies and ended up neglecting their emotional needs. As a consequence, they were unable to realize their children were having a rough time, which leads to the school environment to be the only scenario capable of intuiting the reality that these children are going through.

Therefore, the triggers for these psychological conditions are often quite complex. Yes, the trigger may be neglect, abuse, and mistreatment. However, there are also stressors (change of school, parents’ divorce) and, of course, it’s essential to be attentive to personality variables and even genetic factors.

Systemic therapy is the usual approach when treating internalizing disorders in children. The mental health professional mustn’t only focus on the child’s emotions but on their family environment as well. Likewise, the therapist must offer the child or adolescent different strategies that help them understand their own emotions and learn their bodies’ reactions to anxiety, for example.

Improving their social skills and their assertiveness will allow them to have more self-esteem and, in turn, function with greater security and calm. Additionally, they’ll feel more in tune with everything and everyone around them. Undoubtedly, the early detection of the symptoms of these clinical realities should be a priority in our society.