The Barkley Model to Explain ADHD

What's ADHD? How does it manifest and why? In this article, we explain it to you through the Barkley model. 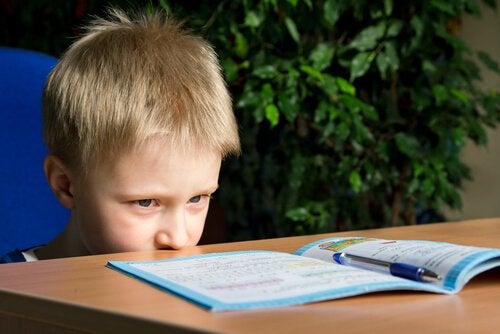 Attention deficit hyperactivity disorder (ADHD) is a childhood-onset disorder. There have been several attempts to explain its origin and development. However, one of them has attracted a lot of attention: the Barkley model.

This disorder is characterized by a persistent pattern of distracted behaviors, excessive activity, and difficulty controlling impulses or impulsivity. It’s one of the most studied disorders in child psychopathology. Consequently, there have been thousands of articles published on the subject.

Initially, these articles had a medical approach. Subsequently, behavioral, neurocognitive, genetic, and social approaches appeared. This has enriched our understanding of this disorder. The dominant approach throughout the first half of the last century was purely medical. Professionals considered that a neurological disorder led to ADHD. In other words, some type of brain injury caused an alteration in the brain.

The main symptoms of the disorder were short attention span, poor concentration, impulsiveness, and inability to delay gratifications. All of them manifested themselves in school-related issues.

From the medical model to the behavioral model

The lack of evidence regarding the medical syndrome contributed to the search for a more functional definition of ADHD. Thus, experts began to characterize ADHD as a behavioral disorder. According to this approach, excessive activity was the aspect that stood out the most.

However, in 1972, some scientists argued that the basic deficiency of hyperactive children was not their excessive degree of activity. Rather, their basic deficiency was their inability to pay attention and their impulsiveness. Most of the problems that children with ADHD experience are the result of insufficient self-control.

The current perspective on ADHD is reflected in the Diagnostic and Statistical Manual of Mental Disorders (DSM-5). We can also observe it in the WHO’s International Classification of Diseases.

The basic characteristic of this disorder is a persistent pattern of inattention and/or hyperactivity-impulsivity.

Research on the origin of ADHD has been predominantly atheoretical, exploratory, and descriptive. Despite the progress, there are still important inconsistencies on the mechanisms that underlie it.

The four functions of the Barkley model

The four functions are working memory, self-regulation of affect, motivation, and arousal, internalization of speech, and reconstitution (behavioral analysis and synthesis). In turn, these executive functions influence the motor system, which controls goal-directed behavior.

These functions also affect other neuropsychological systems, such as the sensory, perceptual, linguistic, mnemonic, and emotional systems. Working memory (operational memory) allows you to retain information while working on a task, even if the stimulus has disappeared.

The self-regulation deficit of affect, motivation, and arousal doesn’t allow children with ADHD to control emotional responses to a specific event. Consequently, they manifest their emotions in public, according to the Barkley model.

The internalization of speech also tends to present a deficit in these children. This lack of internal speech maturity could cause difficulties in adopting behaviors governed by rules and a delay in moral development.

The deficiency in reconstruction, behavioral analysis, and synthesis, prevents the hyperactive child from analyzing situations and behaviors. Likewise, it hinders their problem-solving ability. Their play behavior is less mature, less symbolic, and less creative. Experts have discovered that they have poorer performances in verbal fluency tasks and that the answers they provide to the problems are less adequate.

According to the Barkley model, this would also probably be evident in the execution of non-verbal tasks that require new and complex motor sequences. These four executive functions would affect the motor system.

Other models have tried to explain ADHD. Despite the changes in terminology and the different emphases on specific manifestations of ADHD over time, its main symptoms have barely changed.

Psychology
5 Reasons Not to Rush into a Relationship

After a break-up, you may find yourself all of a sudden fervently needing to become involved in a new relationship. You feel the need to…

Psychology
How to Identify Your "Blind Spots" In Love

Sometimes we do this thing where we throw ourselves into the unknown with our eyes closed and our hearts open,…

Psychology
The Challenge of Infertility: Living with the Void

Being a mother is a personal choice. Some people never feel the need to become one and break that traditional…