"In A Heartbeat": A Wonderful Short Film About Two Boys in Love 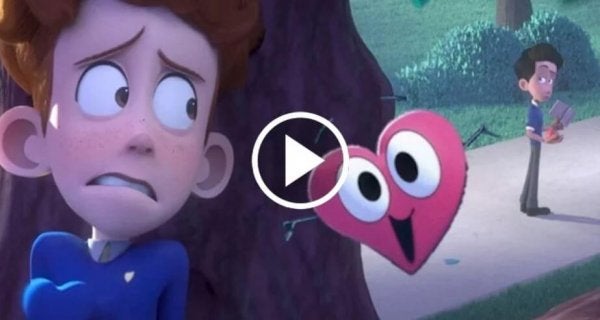 “In a Heartbeat” is the title of a silent short film that’s been a total hit on social media. That’s because of how simply and accurately it shows the beginnings of love between two preteen, or teenage boys.

The video beautifully shows how one blushes when he sees the other, and how other people’s looks move past what seems to be happening but isn’t definite yet.

The key to its success is in how it boldly presents society with homosexual love at an early, complicated time. A time when interests start to bloom and kids still don’t know where these intense feelings are coming from.

In a Heartbeat: Clarifying what “homosexual” doesn’t mean

We live in a very tolerant society. But it’s not that way with smaller groups since there’s already a dominant model of sexuality. While we’re tolerant of heterosexuality at a certain age, society isn’t yet with homosexuality or teenage sexuality.

That means we’re restrictive in ways while we’re very expressive in others. All of this within what we consider an acceptable form of sexuality.

The problem is that there’s too much ambiguity. We’re not going to go into all the clarifications society needs to understand about sexuality, but it’s important to clarify that sexual orientation:

That’s why we want to knock down the myths. WHAT BEING HOMOSEXUAL DOESN’T MEAN:

Someone with an identity and orientation distinct from the heterosexuality normalized within the dominant gender binary (man-woman), may become sensitive about their feelings of attraction.

Then comes doubt, insecurity, fear… It’s a time of confusion that they, their environment, and the society at large, should process naturally.

That’s why things like “In a Heartbeat” help people understand and validate the feelings inside. Feelings that they don’t always know how to think about.

Why? Because the little film normalizes love and attraction no matter towards who, no matter the sexual orientation.

In the majority of cases, years go by before a person accepts their own sexual orientation. This happens with the normalization of emotions, thoughts, and behaviors tied to sexuality.

But time by itself isn’t enough. There are also several barriers that make an appropriate transition harder.

In a Heartbeat: the difficulty of being homosexual and a kid

These barriers come up because they don’t come up in social learning. Most people of heterosexual orientation know how sexual behaviors between men and women usually go. But could we say the same about man-man, or woman-woman relationships?

This is evidence of how people with a homosexual orientation have to start at zero. Meaning, they have to turn to “special places” to explore their sexuality.

In fact, the existence of these places means there’s a restriction of public affection or sexual behaviors that aren’t traditionally accepted.

Socio-familiar tensions are an erupting volcano where people constantly spit out negative words and behaviors. It’s often the root of sexual repression, undermining the person in a way that destroys their growth.

Unfortunately the making and success of “In a Heartbeat” is news. It’s because there are still parts of society that don’t understand or tolerate different kinds of sexual attraction. All they know is what’s traditionally accepted: man-woman.

That’s why it’s so important for us to spread this information. Because when it comes to sexuality there’s still a lot to understand and huge battles to fight.

There are many people who think "being independent" means having enough money not to depend on anyone. Others suggest that independence is acquired when one is able to make choices without asking…

Having low emotional intelligence is a problem that can have a significant impact on every type of social relationship. Some…