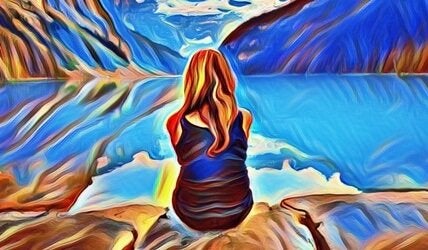 Honest people never try to please everyone. They don’t like hypocrisy, which is why they don’t hesitate to practice the only language they know: honesty. They’re loyal and firm in their convictions. In addition, they know just how to create strong and significant bonds with people who they feel are worthy of their friendship.

Some people like to say that they always defend and praise the truth. However, the moment someone decides to be honest, more often than not, they end up criticizing them. People’s actions don’t always match their thoughts and beliefs. We’re often aware of the way we feel and still end up communicating the opposite. We do it because of social conditions or for fear of hurting others or attracting attention.

This shows just how valuable honest people are. They’re courageous enough to be coherent with their thoughts and actions. Few social and psychological aspects are as necessary as honesty. It’s that dimension Thomas Jefferson considered the first chapter of wisdom and Mark Twain defined as a lost art.

“No legacy is so rich as honesty.”

There’s one aspect about honesty that we must keep in mind: we always demand it from others. Thanks to it, we’re able to build relationships and base them on trust. We need the people we love to be sincere and authentic at all times.

How to identify honest people

Honest people don’t carry banners or shirts with hashtags that define who they are. It’s important that we learn to identify them by ourselves. A good way to do this is by listening, observing, connecting with those around us and, of course, bearing in mind that there are no justifications for honesty. Let’s expand on these ideas.

They don’t waste time on what they dislike

The Julius Maximilian University of Würzburg, Germany carried out a study to dig deeper into this dimension. The first aspect they discovered is that honest people often save time in many of their conversations. They don’t beat around the bush and simply don’t waste time with people they dislike or that don’t share their values. They distance themselves from those people assertively and respectfully.

By doing this, they don’t give or expect justifications. They know how counterproductive it is to prolong situations that might bring bad consequences in the long run.

They don’t lie nor tolerate lies

Psychology professor Daniel Ariely delves on this topic in his famous book The Honest Truth About Dishonesty: How We Lie to Everyone-Especially Ourselves. According to the author, we all consider ourselves honest people. We like to forget the times when we’ve lied to others and, instead, we maintain an impeccable self-image.

Those who are really honest don’t tolerate lying to themselves or others. They don’t like lying because it creates an uncomfortable cognitive dissonance that attacks their identity and self-esteem.

According to Dr. Anita E. Kelly, psychology professor at the University of Notre Dame in Paris, honest people are happier and healthier. In light of this study, being honest, not lying, and being genuine with yourself and what you say generates greater well-being. A person’s health directly reflects their internal balance and peace of mind.

They know how to build meaningful relationships

Dishonesty and showing little-to-no integrity is unnatural for these people. These cognitive dissonances make them feel uncomfortable. Therefore, honest people value being able to build relationships based on trust. They always make sure to portray their true, authentic selves in a sincere and respectful way. In turn, they demand this of those who are part of their daily lives.

This might explain why honest people have so many trustworthy people in their lives. The number of friends they have doesn’t matter. They only care about surrounding themselves with people they can rely on, genuine people who they can have a reciprocal relationship with.

To conclude, we need to mention one more aspect. Honesty is an ethical principle, a value that helps create a more integral and healthy society. However, this dimension we all believe we have doesn’t always apply in a real and respectful way. We often tell white lies, those that hide our true feelings.

We can’t always express our real thoughts. It’s okay to filter out the information we’re going to give depending on the situation we’re in. Nonetheless, honesty is still a very important pillar of respect towards ourselves and others.

“Whoever is careless with the truth in small matters cannot be trusted with important matters.”

3 Ways Honesty Can Improve Your Health
Honesty is a characteristic that's highly valued by society. As children, we're taught to avoid lying, but we're also taught how to lie. We learn that some Read more »
Link copied!
Interesting Articles
Psychology
Roles and Expectations

In his book The Art of Loving, Erich Fromm left us with a great source of inspiration to reflect on love. The…

Psychology
4 Excuses That Keep You From Reaching Your Goals