Hervey Cleckley: The Father of Psychopathy

In today's article, we'll tell you all about Hervey Cleckley, who defined the way we look at psychopathy and explained why psychopaths act the way they do. 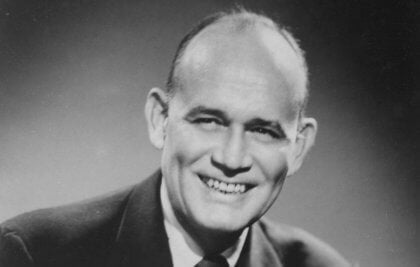 The name Hervey Cleckley may not be too familiar to you. However, we’ve all heard of psychopathy and many of us have even misused the term. This American psychiatrist opened the door to research that defines what we’ve come to know as psychopathy.

He lived from 1903 to 1984 and was a brilliant scientist who made detailed clinical and medical observations of several psychopaths. His main book, The Mask of Sanity (1941), describes sixteen psychopaths who he counseled or who were interned in the centers where he practiced psychiatry throughout his career.

But have you ever wondered exactly what psychopathy is? How can we define it? This psychiatrist revolutionized the research in his field and went especially deep into the whole area of psychopathy. In this article, we’ll discover his key findings.

Hervey Cleckley made all his observations from his own patients. He proposed the hypothesis that psychopaths suffer from a basic deficiency in their emotions, insight, and awareness. As a result, this prevents them from experiencing life at the same level as other people.

Thus, these people experience certain difficulties in accepting and integrating into the social, ethical, legal, and moral norms of a society.

Cleckley collected the main characteristics of a psychopath and embodied them into a total of sixteen basic criteria. He classified them into three groups:

How did Hervey Cleckley understand psychopathy?

Based on these previously stated starting points, Hervey Cleckley developed his research on psychopathy, expanding the field and defining, to a greater extent, its main characteristics.

Cleckley described a psychopath as a charismatic, sincere, and pleasant individual for most of the time. They also usually give the impression of being a person with superior intelligence, perfect reasoning, and many impressive skills. They understand and discuss the social norms with total logic. In addition to that, they completely understand the relationship between actions and the resulting consequences.

This author also postulated that, in situations where people normally feel nervous, tense, or stressed, psychopaths remain calm and without anxious symptomatology.

In most cases researched by this author, psychopathy was, surprisingly, a protective factor against suicidal ideas or actual suicide attempts. Despite the chaotic and self-destructive life that these individuals led, the only attempts to end their lives were nothing more than empty ones. They were usually premeditated strategies to get their family’s attention and favor.

The patients’ actions were often harmful to both their families, close friends, and to themselves. However, they often responded by lying, hiding away, and blaming others, without any remorse or shame. For this reason, Cleckley concluded that the psychopath’s indifference to the truth is remarkable.

This fact, along with their superficial charm and high power of conviction and manipulation, it makes it difficult to tell whether they’re being sincere or not. And, even when there’s clear evidence to the contrary, it’s difficult not to doubt their reasoning.

Now, we’ll turn to his patients’ emotional capacity. Generally, they were able to produce a totally credible feeling of love towards their relatives, wives, or children. However, their actions would often confirm the complete opposite.

These individuals’ feelings and emotions seemed to be merely superficial. What they showed to those around them was totally convincing. However, they were motivated not by the emotion itself, but rather by logical reasons, such as to avoid punishment or to get something they wanted.

Thus, no matter how many sacrifices are made for them and no matter the love or appreciation shown to them, a psychopath isn’t able to respond with the same intensity. The human ethic of doing good to those who are good to you is only valid for them when they can use it for personal gain.

Finally, it should be noted – within the area of emotions – the amount of promiscuity that Cleckley’s work discovered. There was a general tendency towards promiscuity and having many sexual partners.

In some cases, they would use the services of prostitutes and be unfaithful towards their partners. This behavior was due, according to the author, to a combination of the lack of restrictions to restrain them and the impulsiveness that psychopaths possess. This is all in addition to the indifference to their obligations and to the consequences of their actions. We can add to that their lack of guilt, remorse, or shame.

The typical psychopath that Cleckley describes to us frequently uses and abuses alcohol and fails to follow any definite life plan. Because of that, they aren’t able to make any sort of effort towards a goal. As a result, they can’t be considered reliable people.

In addition to all of this, a psychopath’s life experiences hardly ever change their lives because they don’t learn from their mistakes and tend to carry out the same actions over and over again.

This is accentuated when we add the lack of remorse and shame to their indifference to the potentially catastrophic consequences of their actions and their lack of insight.

This bad judgment is clear when you look into their actions and life history. However, in hypothetical situations involving a moral dilemma, a psychopath’s judgment is optimal.

As a last point of interest, Cleckley noted that the crimes committed by psychopaths tended to be minor ones. We’re talking here about minor thefts, vehicle theft, starting or taking part in fights, public scandals, fake checks, etc. Only three of the sixteen cases reported by the author deal with people who are recurrently aggressive.

Despite this, the main characteristic we can highlight here is the pure senselessness of their antisocial behavior. They carried out most of their actions without any specific purpose or with a cost that greatly exceeded the benefits.

As for “ordinary” criminals, the difference between them and psychopaths would be their lack of insight and the intention behind their actions. The “ordinary” criminal acknowledges that their actions (crimes) are a means to achieve certain ends. These means and purposes are normally understood, though not shared, by the everyday public.

This doesn’t happen with psychopaths. They don’t have a specific purpose or understandable reason for carrying out such actions. They may, for example, steal a small amount of money, risking being discovered, and, at the same time, be well off without ever taking advantage of their money.

The legacy of Hervey Cleckley

The description of the psychopathic profile we share in this article is based on an in-depth study in psychopathy. However, you must understand and take into account the period, the context, and the scarce scientific literature available when Hervey Cleckley published The Mask of Sanity more than seventy years ago.

We shouldn’t forget that scientific advances and subsequent research have tweaked, perfected, and expanded all of Cleckley’s original proposals. Even so, his important contributions to the understanding of the construct are still really valuable.

Thus, we’ll always link the name Hervey Cleckley to psychiatry and, more specifically, to the study of psychopathy. Probably, without his research and The Mark of Sanity, many of the subsequent investigations about this issue would never have been developed. Thus, his legacy remains valid, even as a reference, as the door that opened up to future research in the field of psychopathy.