Can a Brain Abnormality Make You a Psychopath?

Can a brain abnormality turn you into a bad person? Many experts believe that although it might predispose you to certain behaviors, there are no guarantees. 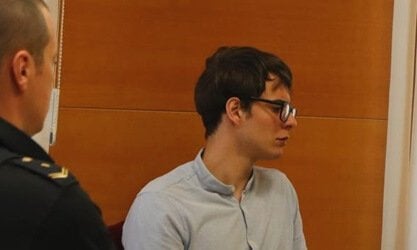 Patrick Nogueira killed his uncle, aunt, and cousins in their home in Pioz, Spain. People said that he did it because he has a brain abnormality that impaired his cognitive skills. Nevertheless, a jury found him guilty. They believed that Patrick is a psychopath who knew exactly what he was doing.

Can a brain abnormality or injury suddenly turn people into psychopaths capable of murder? Can evil be explained in biological terms?

This event was noteworthy in Spain because it was the first time that a criminal defense team used neuroimaging to justify a crime. However, in the United States, brain scans have been used to explain why criminals have such limited self-control for years. The justice system uses these scans to decide whether a person should serve their sentence in a prison or in a psychiatric hospital.

Brain abnormalities in the justice system

The American Judges Association, for example, has been admitting these kinds of studies into evidence for over 27 years. The most famous case was Herbert Weinstein‘s, who was accused of strangling his wife and throwing her over a balcony in 1992. After looking at Weinstein’s brain scans, the judges decided that a cyst in his arachnoid membrane could have made him do what he did.

Nevertheless, many psychologists point out that psychopaths aren’t just people with mental illnesses. A psychopath knows the difference between right and wrong. What’s more, psychopaths understand that their actions are immoral but they do them anyway. What they don’t take into account when they make decisions is other people’s suffering.

“He who fights with monsters should look to it that he himself does not become a monster. And if you gaze long into an abyss, the abyss also gazes into you.”

What neuroscience has to say about brain abnormalities and violent behavior

Doctors did different neurological tests on the Pioz murderer. His PET scan showed that he had low neural activity in different areas of his right temporal lobe. Patrick Nogueira explained that it was because he hit his head as a teenager. He also told the judge that he had been drinking alcohol since the age of 10 and that he was bullied in school.

Psychiatrists said that this kind of brain atrophy could be a clear marker of sociopathy. They said that that particular neurological injury had clear behavioral repercussions. In 1997, Drs. Adrian Raine and Monte Buchsbaum did a study that showed correlations between brain abnormalities and violent behavior. Other studies have found the same correlation.

One of the most famous cases in the history of medicine is Phineas Cage’s. Psychiatrists and neuroscientists alike often use his case as a reference. On September 13th, 1848, Gage was working with a crew that was building a railroad for the Vermont based company Rutland and Burlington.

When the team was splitting a large rock, a very long iron rod broke off in the explosion and ended up penetrating Phineas Cage’s skull and getting stuck there. The rod entered on the left side of his head, passed behind his eye, and came out through his left cheek.

Antonio Damasio, the famous neurologist, is one of the experts who studied Cage’s case the most. He determined that the injury to Cage’s frontal lobe could have altered his personality, emotions, and social interaction ability.

Many psychologists admit to a certain point that a brain abnormality doesn’t always affect behavior. In other words, it might predispose someone to a certain kind of behavior, but it’s not a guarantee.

Criminologist and psychologist Vicente Garrido explains that a brain defect or injury doesn’t turn people into automatic killers. A brain scan can’t show us someone’s thoughts nor what they’re capable of doing.

There are many determining factors. What’s more, only a small percentage of psychopaths actually end up committing murder. The reason for that is quite simple: they can choose between doing right or wrong.

One of the most interesting case studies of psychopath neurobiology is James Fallon’s. This University of California, Irvine neuroscientist is one of the leading experts on sociopaths. Obviously, this particular person isn’t a murderer, nor has he committed any violent acts.

Nevertheless, there is something peculiar about Dr. Fallon. He has the psychopath gene in his brain and an anatomic abnormality that corresponds one-hundred percent with the sociopath personality. Not only that, but there are at least seven murderers in his family tree, including the very famous Lizzie Bordon, who murdered and hacked her family to pieces.

James Fallon lives a normal life and has never committed any crimes. He talks about psychopaths, sociopathy, and his own story all over the world.

What conclusions can we draw from this? Can a brain abnormality make you a psychopath? Can it lead you to commit heinous crimes like the murder in Pioz? To this day, we still don’t have any clear answers. However, one thing is fairly certain: a brain abnormality can predispose us to certain behaviors, but there’s no certainty that it’ll directly lead to atrocious crimes.

The D-Factor and the Nine Traits of Human Evil
Today, we're going to tell you about a new concept called the "D-factor," a group of traits shared by people who behave in evil ways. Read more! Read more »
Link copied!
Interesting Articles
Psychology
Dancing Can Help Combat Brain Aging

One of the most fun ways to combat brain aging is by dancing. That's right - on top of being great…

A quote from the famous Livy went like this: “Fear is always ready to see things as being worse than…

Honest people never try to please everyone. They don't like hypocrisy, which is why they don't hesitate to practice the…

Psychology
Three Things I Don't Do Anymore When I Get Anxiety

When we have anxiety, people love to say, "calm down, relax, it'll make you feel better, you'll see." For a few…