Gru: The Redemption of a Villain

Although Despicable Me is an animated movie, it touches on some heavy subjects. It’s a surprisingly positive portrayal of a single dad, but paints an unrealistic and superficial picture of adoption. 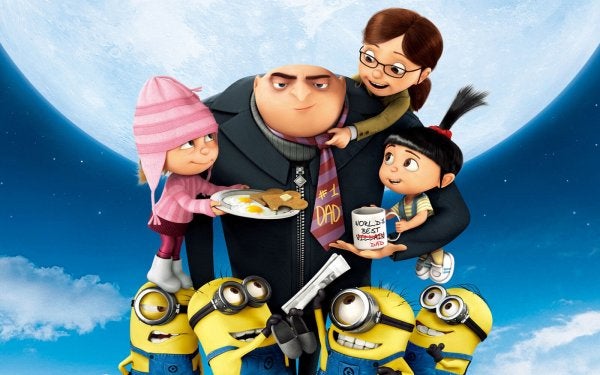 Despicable Me is an animated movie from Universal Pictures. Its main character is Gru, the evilest villain of all time. All Gru has ever wanted is to feel accepted. In order to make his dream a reality, he decides to become a villain.

Gru will do whatever it takes to become the best villain in the world. He doesn’t care if he harms others in the process. One day, a rival villain named Vector one-ups Gru by stealing the Great Pyramid of Giza. At that moment, their competition begins.

Gru comes up with a plan to steal a shrink ray from a government testing facility. Gru’s plan is to use the ray to steal the moon. This would allow Gru to be recognized as the best villain. However, things don’t go as planned. Vector steals the shrink ray right under Gru’s nose. What can this criminal mastermind do about it? Come up with another plan, of course.

Gru’s new evil plan involves using three orphan girls as spies. Gru wants them to knock on Vector’s door and pretend to be selling cookies so he can infiltrate Vector’s lair and steal back the ray.

However, there’s a slight kink in his evil plan. Gru starts to feel some affection for the orphans. This love changes him. In the beginning, Gru is a completely incompetent parent. As the movie goes on, however, Gru has to plan around the girls’ schedule: ballet classes, chores, meals, etc. Gru’s evil plans take a back burner to his daughters’ needs.

It’s incredibly rare for a children’s movie to portray a single dad in such a positive light. Sure, Gru has a decidedly evil job, but we also see incredibly sweet moments between him and the three little girls. This sweetness is heightened by the contrast between the sweet, fragile girls and big, bad Gru.

Gru decides to prioritize his work over the recital, and that gives his archnemesis Vector a chance to kidnap the girls. Gru has to find a balance between his professional and personal life when he gets the girls back.

The redemption of a villain

At the end of the movie, the moon returns to its normal size and back into orbit. Gru regrets what he did and tries to redeem himself. In his zeal to undo all his bad behavior, he decides to also try and return the pyramid that Vector stole. Gru accepts that he loves his daughters and adopts them again. And thus, the greatest villain in the world becomes a family man.

For Gru to redeem himself, he has to repent, ask forgiveness from the girls he hurt, and somehow make up for all the damage he did. The redemption of a villain requires letting go of guilt and pain.

The need for redemption is real and powerful for victims and aggressors. In the healing process, both sides need to know that they’re worthy of love, kindness, and compassion. We’re not saying that you can only find those things through redemption, but that we can heal and free ourselves through forgiveness.

The transition between good and evil

The lesson of the movie is that even an evil person can change. Despicable Me is very different from most children’s movies, since most of them portray good and evil as absolute.

Many viewers find Gru’s transition from evil to good hard to swallow. At the same time, viewers who are invested in the story think it’s the most satisfying part of the movie.

In most children’s movies, the “bad” character often has to make a heroic sacrifice at the end of the story. Many of the “evil” characters who make this sacrifice die during the process. While this might be the ending that audiences like, it doesn’t give the main character a chance to change.

In Despicable Me, Gru repents, changes his ways, and the girls forgive him. They end up being a positive influence on our villain and make redemption possible.

Gru: A bad example of an adoptive father

Even though he risks losing his daughters’ love, Gru keeps living his life on the path of evil. Yes, he makes certain changes, but only for selfish reasons. Curiously, even though he returns the things he stole, Gru doesn’t say goodbye to his team of mischief-makers. He doesn’t let his Minions go.

Thus, Gru’s future profession is kind of up in the air. The viewer can assume that Gru’s new family life will make it impossible for him to continue his evil deeds. However, this isn’t very clear in the movie. One important aspect of this story is that it seems like all the characters have to forgive Gru’s evilness. In spite of the fact that he behaved badly and used the girls for his own wicked ends, everyone forgives him.

Adoption is a delicate subject, and this movie doesn’t really delve deep into it. Despicable Me shows that orphan children can be used and then cast aside. At least one character should have remembered Gru’s behavior and questioned if he’s fit to be a parent. Maybe it would have been more realistic if some of the characters refused to forgive him.

Equating forgiveness with happy endings can place an unfair burden on the victims in the real world. This type of ending makes the audience feel like the villain didn’t pay enough of a price for his wrongdoings. In fact, most of the critics of Despicable Me are parents of adopted children.

Nonetheless, redemption stories are fun, satisfying, and popular. We want to think that the redemption of a villain is possible. We all want to believe that anyone, no matter how despicable they are, can turn their life around.

What Factors Influence Attachment in Adopted Children?
All adopted children go through certain experiences in their first few years of life that can complicate their development -- experiences that other children don't have to deal with. Read more »
Link copied!
Interesting Articles
Cinema, Television, and Psychology
A Clockwork Orange: Behaviorism and Freedom