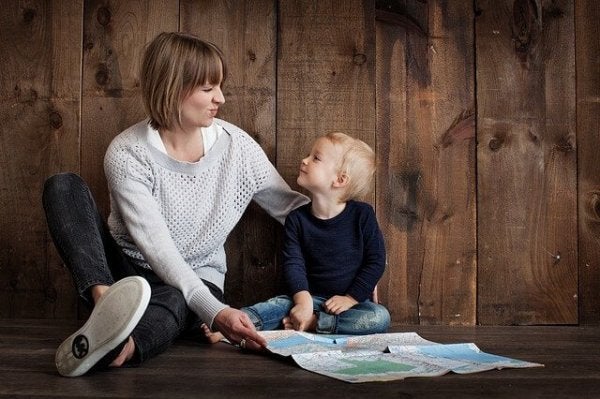 Nowadays, there are many different types of families out there. One of these is single-parent families. They’re characterized by the absence of one parent.

As with all family types, this one has peculiarities that differentiate it from other archetypes, such as the nuclear family. Among those peculiarities, there’s the fact that these children have had to live in a situation of conflict that their parents created.

But there are many other differences that reveal the process of adaptation that these families have had to go through in order to be part of society. And, of course, society has also had to evolve in order to fully accept these families.

“People tend to divorce for many reasons but essentially they divorce because they were unable to establish a good marriage or were unwilling to settle for a bad marriage.”

The absence of one of the parent figures in many cases strengthens the affectional bond between the parent and the child. Similarly, this absence of one parental figure makes the single parent usually more independent when it comes to making decisions regarding their child. This also means they don’t have to deal with arguments about how to raise their kids. This flexible and laid back environment can cause a more pleasant familiar atmosphere.

In single-parent families, individuals who don’t have one of the two attachment figures are generally more independent. Many children have to play the role of the absent parent and take on greater responsibilities than they should due to their age. These demands and forceful adaptations help them become more mature, but it can also be a disadvantage.

One of the main difficulties that these families face is the children’s exposure to their parent’s conflicts. It’s very clear that these problems have a direct impact on the children. In many cases, this impact leaves a deep wound that echoes beyond childhood years.

In addition, kids may experience rejection as a result of not having a traditional family.

Also, the difficulty in maintaining healthy conversations and reaching an agreement promotes unilaterality when it comes to making important decisions.

On the other hand, raising a child alone increases the single parent’s daily work load. Thus, they tend to spend less time taking care of their own needs or don’t see them as a priority.

Furthermore, the single parent lacks the opportunity to contrast opinions, debate solutions to potential problems, or simply delegate the responsibility of certain decisions to another person.

In single-parent families, children may not respect their parent’s privacy. They don’t know what couple intimacy means.

In some cases, they may often interrupt conversations or participate in decisions that don’t concern them given their age. This can also lead to the parent giving the kid more freedom to do whatever they want. And they obviously take advantage of it.

However, as we mentioned earlier, sometimes the child may also play the role of the absent parent. They may, for example, not allow their mother to go out with her friends or even demand to share the same bed.

The most negative thing about this situation is that the adult parent unconsciously enables it. Single parents usually don’t have a partner who’s invested enough in their child’s upbringing to tell them that they’re doing something wrong.

Nonetheless, single-parent families are still bound by the same “glue” as any other family, the glue of love, protection, security, and constant care.

Co-Parenting: A New Model for Raising Children
Co-parenting is a new family model where there are two co-parents who -- without any sort of romantic or sexual relationship -- come together to fulfill a basic but special life desire: to have a child. Read more »
Link copied!
Interesting Articles
Cinema, Television, and Psychology
This Short Will Teach You The Charm Of Being Different

Silvio Rodríguez is a musician who has put on entertaining concerts for over 70 years. This Cuban singer-songwriter continues to…

Back pain is very common and affects both men and women. In most cases, doing the right movements may help relieve…