When Guilt Becomes a Burden 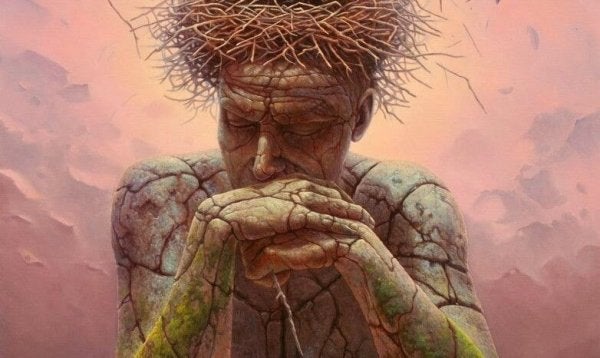 Guilt is the price we pay to be a part of what we call civilization. Although no set of moral rules has managed to eradicate destructive behaviors, they have managed to diminish and restrict them. Without those moral mandates and without the guilt that comes from misbehaving, we wouldn’t be able to build stable societies.

We need it to know that there are boundaries and that we can’t do whatever we please without consequences. This feeling manifests itself in our mind thanks to either symbolic or tangible sanctions. Authoritative figures instill it in us and it helps guide us to become good people.

“There’s no problem so awful, that you can’t add some guilt to it and make it even worse.”

There’s a point where we no longer need sanctions to carry its burden. There’s an unsettling feeling or a deep discomfort when we’re conscious that we’ve done something we’ve categorized as ‘bad’. We’re ashamed of it and are overcome with fear of losing our self-respect or self-appreciation.

Thus, being unable to experience feelings of guilt is something very serious. However, experiencing too much guilt can also be very harmful. In some circumstances, it’s possible to become obsessed with it. In these circumstances, your conscience is no longer that soft voice that guides you to be a ‘good person’. Rather, it becomes a relentless judge that doesn’t leave you alone. It can be so piercing that it can even make you physically ill.

The different faces of guilt

It can manifest itself in many forms. The most frequent form is a lack of differentiation. It happens when a person’s conscience is so restrictive that it can’t distinguish between thoughts, wishes, and actions. For these people, thinking of doing something or desiring something is practically the same as having done it. Therefore, they feel the same level of guilt in all those cases.

Another way neurotic guilt manifests itself is through excessive self-punishment. The person torments and punishes themselves without compassion due to behaving in a way that they consider reprehensible. They don’t forgive themselves for having a moment of weakness or for their lack of judgment. They’re capable of hitting or hurting themselves, on purpose or subconsciously, to ‘repair’ their guilt.

There’s also another form called omnipotent guilt. This is when a person also feels responsible for matters that are completely out of their control. For example, when someone has an accident and another person feels guilty for not having been there to avoid it or help out. It happens a lot with mothers, who often feel as if they should have complete control over their children‘s lives.

The crossroads of neurotic guilt

A person with neurotic guilt can make their conscience their worst enemy. They develop a vigilant attitude, similar to that of any security guard. They’re on alert for any idea, feeling, or desire that could be potentially ‘dangerous’. If any of these arise, they make sure to punish themselves for having the audacity to let them exist. In more serious cases, they can even paralyze their personality.

Many of these phases originate at a very early age. Conflicts with parents or emotional neglect can make people feel that they’re ‘bad’. That’s why those people can be self-suspicious or self-harmful again and again for being so ‘deficient’.

Likewise, a small kid can experience profound anger toward their mother or father. Perhaps they’ve been neglectful, didn’t show them enough love, or were maybe even abusive. However, the child doesn’t let themselves have negative feelings towards the figures they love the most. That’s why they turn all that rage against themselves and this transforms into constant guilt in their adult life.

Sometimes that neurotic guilt doesn’t manifest itself so clearly. There’s no thinking or feeling, just doing. People simply look for situations that hurt them and constantly block themselves to be able to punish themselves. When someone gets trapped in the crossroads of guilt, their life becomes a living hell. They never feel that they’ve paid for what they accuse themselves of.

Psychology
Identity and the Ship of Theseus

We tend to think that our identity is unique, that we’re born with it and it always remains the same.…

Psychology
Freud on Developing a Strong Sense of Self

Psychology
A Psychological Perspective on Wisdom

Intelligence experts and psychologists have been studying the concept of wisdom for a long time. It has a scientific definition…