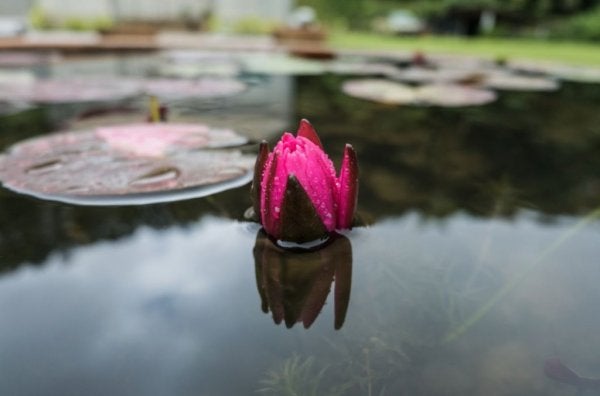 The sky, with all its interesting mutations, is like a sea that reflects life’s face back at us. At the very least it’s like a canvas where we can see some kind of similar or comparable phenomenon. In both dimensions (earth and sky; heart and emotion), in both the clouds and our daily lives, there are are stormy moments and days. It just depends on the place you’re in, and also partly on your surroundings. What we’re talking about are the sun and gray clouds that go crazy when there’s a storm.

On a rainy day, when the sky is full of gray clouds, it’s beautiful when it’s just a bit cold out and you’re under a safe roof and with a book to get lost in…because sometimes other people’s stories calm down our own. The written words talk to you and you tell them things. You have a silent dialogue with them where you can be free, because the characters don’t judge or sell advice, unless its for the price of laughter. And they all listen in their own way.

You can probably remember more than one day where you’ve thought, “I would’ve been better off staying in bed today; I wouldn’t have gotten up if I knew that.” And the strange thing is that we never think about how the only way to appreciate a green light is for there to be a red light. Beyond that, it has to exist and you have to encounter it at some point. This might seem contradictory, but a lot of times it’s our little tragedies that make us appreciate our greatest successes.

At a red light, like on a cold and stormy day, there’s an opportunity for you to find yourself. The opportunity to close your eyes and breathe, to wonder about the stories of the people who happen to be beside you. In this sense, if no one is going to give you back the time you spend waiting, why don’t you look for a way to take advantage of it, and even enjoy it?

“A lot of times it’s our little trageidies that make us appreciate our greatest successes.”

Something happens with our emotions (gray clouds), specifically the ones we see as negative and undesirable. We’re talking about sadness, anger, and fear. Or about envy, hate, disgust, and bitterness. The feelings no one wants for themselves or the people they love. But this is where another one of our big contradictions comes to save us. They’re emotions we don’t want but a lot of the time we actually feed them. In this way we make sure they survive, or pretty them up and give them a starring role.

Why do we do this if we see these gray clouds as undesirable? Most of the time we do it because they give us a lot of “secondary gains.” This means that you realize that when you’re sad you get more attention or that when you get angry the people around you are more careful about the way they treat you. Let’s see: attention, careful treatment, preference, who wouldn’t be seduced by those privileges?

And besides, what kid hasn’t pretended to be sick at some point to avoid going to school? Who hasn’t pretended to feel an emotion at some point to get some of those secondary gains? You might not even have planned to do it or done it consciously (we usually don’t). Of course, no one is so twisted that they’d do it on purpose. The fact is that it’s the exact opposite of what happens when you try to get out of a morning of being bored at school. What usually happens is that the emotions will actually start to exist once you pretend to feel them.

They’ll start to exist or stick around. In a lot of cases the pretending will start when the original emotion has disappeared. Just imagine a grandmother who’s become a widow, and whose family members have made an effort to relieve her pain. This beloved grandmother might feel like if she stops seeming sad to everyone else, they’ll stop paying attention to her and taking care of her. In this sense, it makes perfect sense that she might start to pretend she feels the emotion to some degree. In that way she keeps the emotion alive without realizing it…because just like we’ve said, it’s hard to pretend to feel an emotion without falling into its web.

Energy and information, the amazing power of gray clouds

So a healthy effort to look inside yourself can show you that you’re in a similar situation as what happened to that beloved grandmother. But that doesn’t mean you should try to immediately push away any negative emotion you might feel. That is, a lot of the time it’s true that you feel sad and that you need care from other people. There’s nothing wrong with getting it, because it will help you, and you aren’t and won’t be a weaker person for accepting it.

This is one of the true adaptive functions of negative emotions. The other has to do with information and with energy. Every emotion has these two elements. For example, anger will inform you that someone or something has hurt you, and energy will help you act if you think there’s a need to do something about it.

In the case that you don’t think you need to (this is where good emotional processing makes a difference), you’ll have to find a way to get rid of that energy moving around inside you. A way that doesn’t hurt anyone, and especially not yourself.

You Have the Right to Have a Gray Day
Read more »
Link copied!
Interesting Articles
Psychology
7 Books on Positive Psychology

Do it, take the leap into thinking positively and you'll feel different. Shift perspective, relativize, reformulate. Only in that way will…

We're all born with a little bit of unconditional self-love, but over time we start to lose it. It takes time…