Sexism and gender biases have evolved a lot in recent years. Some of the most noteworthy, recent theories about it have come from psychologists Swin, Aikin, Hall, and Hunter. 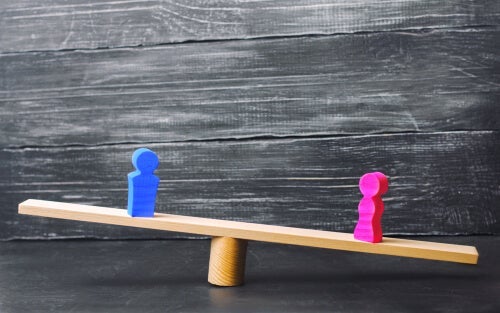 Sexism is the assumed inferiority of women as a group. It’s an attitude that has stuck around and evolved throughout history due to many sociological reasons. But sexism has long led to the oppression of women for the simple fact of being women, even in modern society.

Nowadays, you probably won’t see people openly expressing it much in Western countries. Many organizations are working to prevent it and fight against it. That being said, sexism is deeply ingrained in these Western countries and many others.

Sexism has evolved a lot in the past few decades. Some of the most noteworthy recent theories on it were published by psychologists Swin, Aikin, Hall, and Hunter.

Another phenomenon called neosexism also manifested recently. This kind of sexism is a reflection of a common conflict in our modern society: egalitarian ideas about women, set against men’s continued feelings of superiority over them.

Psychologists Glick and Fiske tried looking at sexism from a perspective similar to the one used in contemporary racism theories. In the end, the specificity of the relationship between men and women made it hard to apply racism theories to sexism theories.

There’s a fundamental contradiction in sexism: men and women have had a relationship of dominance and subordination, and yet that hasn’t prevented people from forming intimate bonds. Men have happily rejected women for a job and then gone home and embraced their wives. That alone has made sexism differ a lot from racism.

The theory of ambivalent sexism

Developed by Glick and Fiske (1996-2001), this is the most influential sexism theory to date. As its name suggests, it’s about ambivalence. Relationships between men and women, both in the past as well as the present, have involved a high degree of dependence. There are two basic types of sexism within that framework:

Benevolent sexism takes a positive view of women but only within a specific framework. Hostile sexism associates women with a wide range of negative characteristics. But at the end of the day, the goal of both is to legitimize and reinforce inequality based on gender.

Feminism and the fight for equality

Nowadays, thanks to the establishment of basic rights in many countries (mostly Western), feminism and the fight for equality are on the rise.

Feminism is a social and political movement that began at the end of the 18th century. One of its goals is to raise awareness. In their rallies, women call out the oppression, subjugation, and exploitation they’re subjected to in the patriarchy. Feminism is about women’s liberation.

Inequality is still a major problem in today’s world. Sexism, gender-based violence, and other crimes of sexual nature happen all over the world every day. This is what makes it so important to be aware of the reality and do something to change it.

Many legal organizations try to prevent and fight gender and sexuality-related hate crimes. But punishment can only do so much. We also need to educate people. We need to teach people from an early age that respect, tolerance, and equality are basic rights. Maybe then we’ll have a modern society where sexism doesn’t exist.

Why is Gender-based Violence Increasing Around the World?
The stats presented by the World Health Organization (WHO) on gender-based violence are truly alarming. One in three women around the world has suffered it. Read more »
Link copied!
Interesting Articles
Social Psychology
What's the Mere Exposure Effect?