What's naturalistic intelligence and what's it for? What does it have to do with nature and who were the famous characters that developed it? Find out in this article. 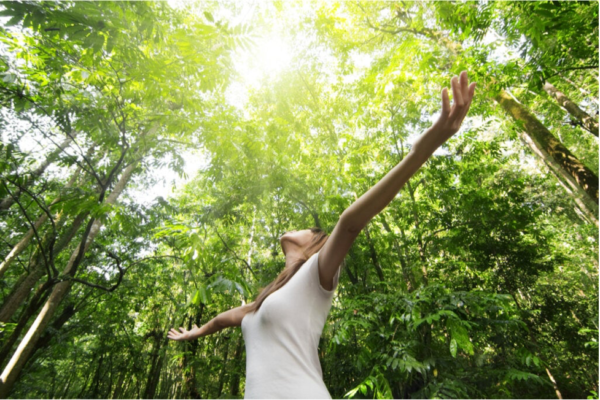 This type of intelligence concerns your ability to relate to the environment and its elements. It allows you to observe, understand, order, and classify nature. Furthermore, you’re able to establish relationships between its elements. For example, flora and fauna.

Naturalistic intelligence is probably one of the least known classified intelligences, as well as the least valued, certainly at an academic level. However, as you’ll see, with this kind of intelligence, our ancestors learned about their environment and how they could survive.

Gardner’s naturalistic intelligence: what is it and what purpose does it serve?

In addition, using this type of intelligence, you can connect and interact with different environmental elements. This, in turn, means you have a better relationship overall with your environment. In reality, this concept encompasses the urban, suburban, and rural contexts, and not just the “natural environment”.

Our goal to survive

Naturalistic intelligence is probably the intelligence that most helped our ancestors to evolve and adapt to their environment. For these reasons, some experts place its origins in the Paleolithic era.

Leaving aside the survival aspect, today, this type of intelligence allows you to better understand nature and develop hierarchies within the natural systems themselves. This is particularly useful in certain fields of knowledge, like biology, for example.

Who has, or rather, had a high level of naturalistic intelligence? Charles Darwin (Shrewsbury, 1809 – Down House, 1882) and geographer and naturalist Friedrich Heinrich Alexander (Berlin 1769 – 1859) certainly did.

These authors entered into natural environments and learned from them. They identified animal and plant species and learned their defining characteristics. Then, they used this information for the benefit of both themselves and society. This is what naturalistic intelligence is all about.

In Gardner’s definition of naturalistic intelligence, he emphasized the type of information obtained, as opposed to what you do with it. Indeed, while you might speak of this type of intelligence as a process, in reality, it’s actually more concerned with the concrete elements it deals with.

As we mentioned above, these concrete elements refer to the elements of nature. This means, for example, the anatomical peculiarities of each plant and animal you’re observing. Therefore, you activate your naturalistic intelligence when you’re faced with a natural environment or spaces which contain different life forms.

What processes are activated when you use naturalistic intelligence? These are mainly observation, selective and sustained attention, classification, and categorization skills, the realization of inferences, and the identification of relationships. Furthermore, you formulate environmentally-related hypotheses. It’s also a type of intelligence that allows you to experiment and that orients you towards nature. This, in turn, allows you to get to know and value nature better. In fact, getting a little philosophical for a minute, naturalistic intelligence means an appreciation of beauty, as well as a real love for the environment.

“Keep your love of nature, for that’s the true way to understand art more and more.”

“Nature never hurries. Atom by atom, little by little she achieves her work.”

Discover the 8 Types of Intelligence
When we think of intelligence, we think of someone who solves problems most people would never understand. This follows a traditional idea of intelligence. Read more »
Link copied!
Interesting Articles
Psychology
The Forbidden Fruit Effect

Roald Dahl said that "Those who don't believe in magic will never find it." Interestingly enough, human beings have always…