Five Health Effects of Sleeping Too Much

Most people think not sleeping enough is the only problem. However, sleeping too much can have just as many health effects. Learn more here! 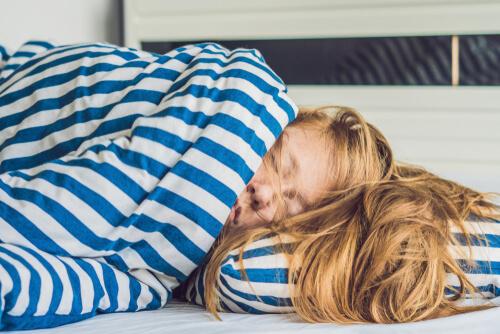 Balance is very important for human beings. Thus, a lack of balance can lead to many physical and mental health issues. This is why sleeping too much can have just as many negative health effects as not sleeping enough.

Obviously, we all need sleep to recharge our bodies. But you shouldn’t take that too far. Not getting 7 hours of sleep a day is just as bad as getting more than 10. Susan Redline, a doctor at Brigham and Women’s Hospital in Boston and a professor at Harvard University, has studied sleep more than almost anyone else in the world.

Redline’s studies line up with a lot of the other sleep studies that have been carried out. Everyone seems to agree that people who get more than 10 hours of sleep a day have more health problems than people who get 7-8.

The health effects of sleeping too much

From the moment we’re born, our bodies regulate themselves to achieve a perfect balance. We spend 20 hours sleeping as newborn babies. That number goes down as we get older and, as teenagers, we need a maximum of 9 hours of sleep. As adults, it’s best to get 6-8 hours of sleep, never going too far over or under those limits.

Our body is wise and tries to make sure we get at least a certain amount of sleep, but it doesn’t want us to overdo it, either. Why? Because our real rest comes from the deep sleep phase and we usually can’t spend more than 8 hours in it.

The problem with sleeping for more than 9 hours a day is that you’re only getting light sleep. It’s not consistent or deep. In other words, it’s bad quality sleep.

Experts warn against sleeping too much, and you really need to take that warning to heart. It has a lot of negative health effects and could threaten your entire well-being.

One of the potential health effects of sleeping too much or not enough is an increased risk of heart disease. According to the World Health Organization (WHO), heart disease is one of the biggest causes of death worldwide.

According to statistics, women tend to sleep more than men, which means they’re more likely to develop heart problems.

We mentioned that getting too much sleep could affect your metabolism. This is because sleeping more means your body is also much less active.

According to international studies, people who sleep too much have a much higher risk of obesity. A lack of physical activity is obviously a major part of that.

This is in some ways one of the worst health effects of sleeping a lot. When you sleep too much, your blood sugar levels tend to shoot up. When this happens too often, it can increase your risk of developing type 2 diabetes.

If you consistently sleep too much, your brain will age faster. Your brain slows down and ages faster when you sleep a lot because it’s not getting enough deep sleep. If you wake up a lot during the night, you get bad quality sleep, meaning your body doesn’t recharge properly.

In conclusion, sleeping too much is just as bad as not sleeping enough. Sleep is a biological cycle you absolutely have to respect and achieving balance is of utmost importance.

5 Secrets to Sleeping Like a Baby
When you sleep like a baby, you think more clearly and have energy to face the day. You learn better and it protects long-term memory, too. Read more »
Link copied!
Interesting Articles
Psychology
"Dear Teacher": A Video to Help Understand Students with ADHD

Psychology
You Are Free When You Think

One of the biggest desires of all human beings is to be free. Freedom is an extremely valuable asset which is sometimes hard for us to find. How many times…

Psychology
Being Extremely Intelligent: The Dark Side We Don't Talk About

Being extremely intelligent does not always guarantee success or happiness. There's another side of high IQ that we don't always…