REM sleep makes up about 50% of very young children’s sleep cycles. However, as we get older, it reduces drastically. 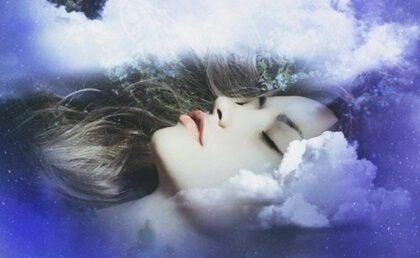 REM sleep starts ninety minutes after you fall asleep. You breathe faster, your eyes make random and rapid movements, and nightmares tend to be more vivid. Curiously enough, during this stage, the brain shows the same activity levels as if it were awake. Why? Because it’s about to perform one of its most important tasks.

This sleep stage was discovered more than 50 years ago. Nonetheless, REM (rapid eye movement sleep) is still very mysterious. For example, scientists know that the brain forms new long-term memories during this phase of sleep.

We also know that, during the REM phase, the brain discards everything it deems irrelevant and keeps only important data. Through this process, it shapes part of what we are, helps with the learning process, incorporates experiences, and settles the foundation of our maturity and of our cognitive, sensory, and emotional evolution.

For example, what experts don’t know is what guides our brain to suddenly enter the amazing REM phase. Studies like the one published in Nature magazine that was carried out by neurologists Jon Lu and David Sherman explain the existence of a “switch” located in the brainstem.

It can be described as a set of specialized neurons that allows us to “access” that state of more vivid dreams, where people can start sleepwalking and our brain reorganizes all those memories that it’s been coding all day.

“Such stuff as dreams are made on.”

The REM phase and the foundation of sleep

When Sherlock Holmes told Doctor Watson that the best medicine for all problems was sleep, he wasn’t wrong. When our body rests, we recover our energy and health. Getting a good night’s sleep is the ideal mechanism to reduce stress, see life from another perspective, and think more clearly.

Sleeping is a biological necessity. The fact that the brain takes control during REM phase is essential. In fact, we know that most of us have between four and nine sleep cycles, each one divided into five phases. The last few cycles are REM territory, where we get those strange dreams and our brain carries out some important tasks.

Newborn children spend most of their time in REM sleep. It helps them better integrate experiences during the most important stage of their development. However, in children over the age of 6, this phase reduces notably and lasts the same time as an adult’s REM sleep.

In addition, just like scientists Una de Karni and BS Rubenstein explain in a study published by Science magazine, REM phase is the key to our perception and focus and to respond to stimuli and learn about our environment in order to survive in it.

Likewise, all mammals and birds dream and enter REM sleep. But the same doesn’t happen in fish, lizards, and turtles.

What happens in our brain and our body during REM sleep?

This phase is also known as the paradoxical sleep (PS) because of the peculiarity of brain waves that appear during this cycle: desynchronized, rapid, and low-voltage.

According to experts, the brain area that regulates this phase of sleep is the brainstem. The cortical and thalamic neurons are more depolarized and a neurotransmitter appears in abundance: acetylcholine. Then, when we get to the REM phase, we usually experience the following symptoms:

In order to better understand how REM sleep works, let’s see what the other phases of a sleep cycle are about.

It’s very common to wake up or feel like you’re falling down during this stage. Muscle tone starts to decrease and alpha and theta waves predominate.

The body prepares for deep sleep and heart rate and body temperature start to decrease. At this point, the body gets ready to enter the most important sleep phase.

These are the deep sleep phases. There are mainly delta waves and sleep disorders may appear, like night terrors and sleepwalking.

During these NREM stages, the body “fixes” itself, tissues regenerate, cells that are no longer useful are eliminated, and the immune system gets rid of the unnecessary. In children, their body grows and develops during this stage.

After about 90 to 100 minutes of sleep, we’re finally in REM sleep. Brain waves are active as if we were awake, our dreams make more sense, and our body loses muscle tone. There are theta waves present and the brain starts to integrate the experiences it gathered during the day in the long-term memory.

This cycle will repeat 4 to 5 times in one night. In each cycle, the REM phase will last longer, starting with 10 minutes and up to one hour (two hours if you’re under 30 years old and half an hour if you’re over 65).

The key to recovering our energy is not only maintaining a good sleep hygiene. Getting good sleep to reach the REM phase is the secret to taking care of our cognitive processes, memory, attention, perception, and the ability to react in a more effective way to stimuli.

Shakespeare once said that a man who doesn’t feed on his dreams grows old sooner. To that, we add that a person who doesn’t sleep, doesn’t dream either, and those who have no dreams, are living a life that isn’t worth living.

The Importance of Getting a Good Night’s Sleep
Not getting a good night's sleep has many other negative consequences than just physical fatigue. Learn more with us in this article! Read more »
Link copied!
Interesting Articles
Culture
Restless Legs Syndrome: A Very Common Neurological Disorder

Restless legs syndrome is currently one of the most common neurological disorders. It is a very uncomfortable tingling and itching sensation…