Eyes Are Windows to the Soul 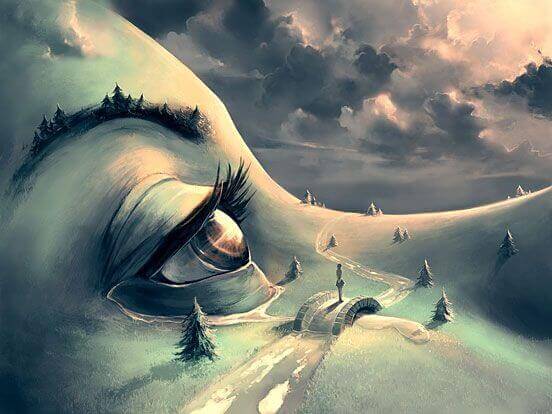 Our eyes don’t lie: they’re windows to the soul. They show the truth, no matter what face we put on, in any situation. The best way to get to know someone is to look them in the eyes and observe what they reveal about their emotional state.

Our eyes, just like our body language, give us away, and they say more than we ever could with words. As a matter of fact, most of the information we convey is through nonverbal language, which ranges from simple looks to all of the movements we make.

Windows to the soul: another way of looking at each other

Many studies have shown that when we meet someone for the first time, our eyes can convey a wide range of feelings: trust or distrust, security, contentment, fear, etc. We know this is true because it happens every day: it’s as if we were capable of transcending our bodily limits and reaching their soul through their eyes.

“The soul can speak through the eyes,
and kiss with a look.”

Some experts, whose jobs require them to study faces, have observed that eyes are the window to the soul because they’re the most sincere part of the face. We don’t have any control over our eyes, as opposed to the mouth, for example. When you like something, your pupils dilate involuntarily and give you away, and they contract as a sign of rejection.

The nonverbal language of our eyes

Here’s an interesting list of some of the information that eyes can convey:

When your eyes elongate, wrinkle, and shine more than normal, you probably feel pretty good. You don’t need to see someone smile to notice that they’re happy.

Through the windows of the soul, we can see sadness, one of the emotions we feel the most but often try to hide. In this case, the eyelids raise, as does the lower edge of the eyebrows.

When we get angry, our eyebrows arch, and our expression is completely serious. Sometimes, we even frown.

When we listen to someone and narrow our eyes, we’re indicating that we’re either evaluating what they’re saying and doubting its validity, or we don’t understand what they’re saying. Half-closed eyes can also indicate tiredness.

When we feel sexual desire or concentrate, the pupils dilate like we’ve mentioned before, which leaves us completely exposed to the other person. We can’t avoid it, so we usually rub our eyes because they get wet and we feel uncomfortable.

“They terrify me, weaken me, it kills me to know
that your beauty is not in your eyes, but in the way you look at me.”

As we’ve talked about, the expression “the eyes are windows to the soul”  is based in truth. However, it goes much further than that. According to a study done by psychologists and other scientists from different branches of the study of human language, throughout our lives, up until we’re about 40 years old, we choose from a series of faces that we adapt to different, distinct communicative situations.

This has been called social face. For example, in sad moments when we feel the urge to laugh, our expression keeps its composure. On this subject, Teresa Baró stated that this doesn’t mean we’re liars, since we live in a society that demands certain patterns of behavior that we must maintain as a manner of survival.

We’re not liars because we can’t be. We can voluntarily make our facial expressions and movements more appropriate, but we can’t stop our eyes from reflecting how we feel.

“The worst way you can betray yourself is to not do the things that make your eyes shine.”

Raising children isn't easy. It can destroy family relationships if we don't do it the right way. We need a ton…

We've all had to make a tough decision sometime in our lives. During these moments, we start doubting ourselves and we…

Psychology
Are You Wearing a Mask?: Four Steps that Will Help You Take it Off

Are you wearing a mask? Do you limit yourself when it comes to expressing your thoughts? Are you hiding your…

Psychology
Habits That Destroy Your Love for Yourself

There are various factors that harm your ability to appreciate what you do and value who you are. The most…