Emotional Reasoning: what it is, and what the Consequences are 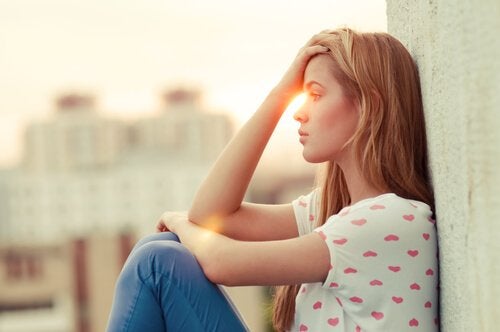 Do you know what it’s like to vividly experience a certain reality without any evidence that things really are that way? Well then you have first-hand knowledge of everything that goes with one of the most uncomfortable psychological issues. It’s a common problem called emotional reasoning.

Emotional reasoning is a term that describes a kind of cognitive distortion. Aaron Beck, the founder of Cognitive Therapy, was the person to use this term, back in the 1970s.

According to Beck, any time you decide that your emotional reaction lines up with reality, that’s a case of emotional reasoning. So you toss out any actual evidence or just ignore it, and only pay attention to this “truth” that comes from your own feelings. On top of that, Beck said that this kind of reasoning has a basis in negative thoughts, which are involuntary, uncontrollable and automatic.

Emotional reasoning assumes that what you feel must be true in general. For example, if you feel sad, it must be true that life isn’t going well for you, and you’re just unlucky. Of course, it can be good to get in touch with your feelings. But not if what you feel is extremely different from what’s actually happening to you.

The strength of your feelings leads to convictions, which usually stick around until the emotional storm dies out. When you practice emotional reasoning, what you’re doing is believing the automatic thoughts that cause emotional problems. Then you end up trying to reason things out based on your feelings.

That’s why emotional reasoning usually distorts your reality and paints it in a negative light. Actually, it can also paint it in a positive light, but we’re not going to look at that side of it in this article. It’s a light that lines up perfectly with your world, and you don’t notice its influence on you. So you never ask yourself if what you’re seeing is actually true, and if you’re manipulating it at all.

“Negative emotions like loneliness, envy, and guilt have an important role to play in a happy life; they’re big, flashing signs that something needs to change.”

Emotional reasoning is a very tricky kind of reasoning, because it’s based on feelings. The problem is that feelings only reflect thoughts and beliefs, not realities. For example, everyone has felt like an idiot at some point in their life. But that doesn’t mean we’re all idiots just because we’ve felt that way, right?

Of course not! It’s a distorted feeling, which means that the emotions we get from it aren’t good proof that we’re actually idiots. The same thing happens, for example, when you feel overwhelmed or hopeless about something. Those feelings don’t mean your problems are impossible to solve and that it’s all over already.

Emotional reasoning also has a really common side effect: procrastination. If you feel like you’re going to mess something up, you’ll probably postpone it or not try to do it at all. The procrastination gets in the way of you making healthy decisions for your self-care.

When something is certain, our natural reaction isn’t to fight to avoid it or get rid of it. We usually resign ourselves to that reality and just accept it as a fact. What generally happens then is that your perception of reality will almost always become real.

Emotional reasoning plays a huge role in almost all cases of depression. Since depressed people feel things so negatively, they usually assume things really are that way. It never occurs to them to question whether the perception coming from their feelings is valid or not.

A lot of depressed people end up falling into emotional reasoning. For example, they might start to filter things out and focus on the negative aspects of some very positive outcome. They do it because they’re moving through life in a negative state of mind. Plus, it doesn’t make much difference whether they have any control over this situation or not. In the end, that’ll just go over their head as long as they’re using emotional reasoning.

The honest truth is that emotional reasoning is really common. We all like to think we make rational decisions, but we actually don’t most of the time. It’s much easier to let our feelings guide us.

In fact, because of the way our brain is wired, it’s much easier to make a decision based on feelings than it is to make one based on facts. We don’t usually look for facts to back up our conclusions. We just accept them at face value because it’s easier.

Change your limiting beliefs and put a stop to emotional reasoning

The main problem with incorrect thoughts (the ones that come into play with emotional reasoning) is that once you’ve decided your emotions are facts, you stop looking for any alternative explanations for things. That’s why these thoughts are so limiting and so problematic.

If you want to put a stop to emotional reasoning, start looking out for any times when it’s taking over your thoughts. Then try to slow yourself down for a few seconds and do these things:

Never lose sight of the fact that emotional reasoning is a mental trap. It’s an illusion that appears when you’re having trouble managing the emotions that feed off of your feelings. Of course, as negative as they might be, emotions are never bad in and of themselves. They’re really there to help us survive.

“Running a marathon with a backpack is tough and may hinder you from winning the race. Don’t let the baggage from your past – heavy with fear, guilt, and anger – slow you down.”

Change Your Beliefs and Strengthen Your Personality
When you change or modify the beliefs that you've carried with you for so many years, you allow your personality to change, too. This is one of many ways to Read more »
Link copied!
Interesting Articles
Emotions
5 Virtues of Calm Minds

Calm minds are not only focused but disciplined. Without a doubt, the age we're living in is always pushing us to multitask and get things done immediately. That's why, currently,…

Love is unconditional. It means giving yourself to the other person. To love is to respect, understand, accept, and to let yourself be loved. But underneath all that there are…

Wellness
Love Has No Size: The Heart Adjusts

When it comes to love, our hearts and values adjust to it. What's truly important is that a couple is in…

You might think I made a mistake in the title of this article. Shouldn't it be a question? But I…

The body and mind form a whole. Hence, emotional problems always leave traces in the body as physical emotions. This is…

Wellness
Give Me A Smile For Everything