The emotional curve is a representation of what happens from the time someone starts to feel an emotion until it completely dissipates. With this evolution in mind, in this article, we'll discuss three things that you shouldn't do during the height of emotional intensity. 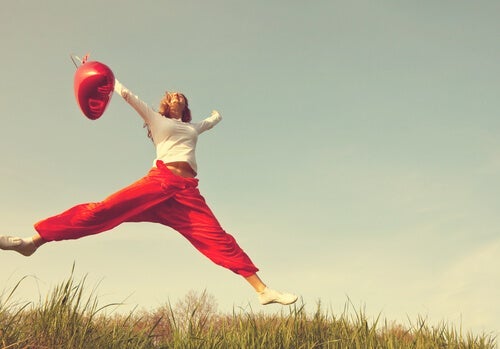 Many experts define an emotion as a subjective state that has an overwhelming or intense affective load. While it’s difficult to explicitly describe emotions, everyone can describe these subjective states in a clear way. For example, you can describe a situation in which you felt angry or happy. A good portion of these emotions, from sadness to fear, develop in a similar way: through the emotional curve.

What are emotions for?

According to researchers such as Martinez-Sanchez (2011), the suppression or non-expression of significant emotional events (crying over the loss of a loved one, expressing affection, etc.) can cause a noticeable physiological hyperactivation, immunodepression, and other negative effects on your short and long-term physical and mental health.

For example, when your body rings the alarm in response to a dangerous stimulus (when you feel fear), this activates the hypothalamic-pituitary-adrenal axis. That, in turn, activates your adrenal glands, which release glucocorticoids. Your body releases adrenaline and endogenous opioids to mitigate physical pain as if you were being attacked. At the same time, systems that aren’t necessary for flight, such as the digestive system, are suppressed.

When you’re in danger, fear increases your heart rate, contracts your spleen to release red blood cells in case of an injury, dilates your pupils, etc.

Emotions help you quickly process information. Your brain can quickly evaluate the characteristics of the stimuli in question, which allows you to take the most appropriate action as fast as possible.

Emotions help you communicate your intentions to other people and share how you feel. They help you control your facial expressions, gestures, and your voice so that you can influence others’ behavior as well.

As Aristotle once wrote, man is a political animal and emotions also play a socializing role. For example, your emotions influence how other people act. Some people use sadness when they need support from others, other people use affection or joy, etc. There are many, many examples of the role of emotions in social relationships.

It’s hard to maintain an emotion’s maximum intensity over a long period of time. In fact, the normal development of an emotion is a curve. At first, the sensations become stronger and stronger. Once they reach their maximum intensity, they decrease in strength.

This might seem intuitive, but most of us don’t think about it on a day-to-day basis, especially when it comes to mental health. This curve applies to emotions as well as anxiety or panic attacks. Consequently, they rarely last more than ten minutes.

The emotional intensity that comes with fear, anger, or sadness makes it all too easy to act when the emotion is at its strongest point. Many people who go to therapy are there for that very reason. The actions you take at the height of emotional intensity are often counterproductive.

Learning to manage your emotions in therapy

In the early stages of therapy, when the patient doesn’t know how to manage their responses, talking about the emotional curve can be useful. The goal is not to control the emotions, but to avoid the negative consequences that a poorly managed intense emotion can cause.

For patients suffering from depression, anxiety, or grief, learning how emotions work in detail can be very helpful. The therapist should also explain what you shouldn’t do at the height of emotional intensity. Over time, continued therapy should help the patient not to experience such intense emotional responses.

It’s important to explain which three things you probably shouldn’t do when you’re experiencing intense emotion, whether it’s anger, sadness, fear, or happiness. Experts recommend this because actions taken during these moments are probably not rational.

Here are a few things you shouldn’t do at the height of the curve:

In addition to avoiding these actions, it’s helpful to come up with a list of alternatives that you can turn to in moments of emotional intensity. Come up with things you can do that help you avoid thinking, solving problems, or making decisions. Keep the list handy for the next time you find yourself high on the emotional curve.

Maladaptive Emotions Don’t Exist
Studies have shown that basic emotions have an inherent adaptive function. These findings lead us to the conclusion that there are no maladaptive emotions. Read more »
Link copied!
Interesting Articles
Emotions
Demisexuality: when Emotions Generate Desire

Demisexuality is a sexual orientation. It describes those who only feel a sexual attraction for people with whom they have…

Emotions
The Impact of a Wound that Doesn't Scar

Being torn away from someone you love, whether through abandonment, a breakup, or death, causes suffering. It's an experience that…

There are times when we feel desperate because we can't make sense of what's going on around us. We feel…