The Body Language of Fear

The body language of fear manifests especially in facial microexpressions. Slightly raised eyebrows, a taut brow, and a half-open mouth are unmistakable signs that someone is scared. 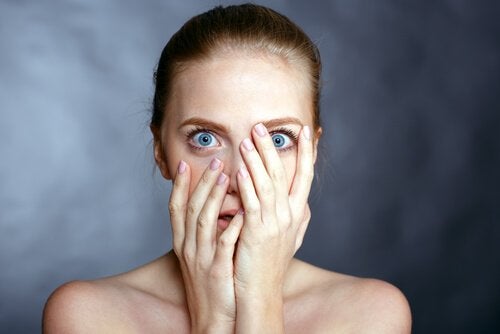 Although feeling scared is normal and perfectly valid, there are situations in which making it obvious isn’t in our best interest. Unfortunately (or fortunately, depending on how you see it), the body language of fear may sometimes reveal how we’re feeling inside.

Although there’s no dictionary of the body language of fear, humans have a special radar that allows them to read those signs. It’s obviously not a completely rational interpretation. We simply sense that someone is scared. Consequently, we don’t tend to trust those who aren’t confident or we may feel superior when we see another person’s vulnerability.

It’s important to know the body language of fear. If you do, you’ll have more control over it. This can benefit you in two ways. First of all, it’ll allow you to detect signs of fear in others, even if they don’t express it openly. Second of all, it’ll help you manage your emotions to ensure that you don’t let your fear show through if you don’t want it to.

“A timid person is frightened before a danger, a coward during the time, and a courageous person afterward.”

The face is the first part of our body that reflects fear. Sometimes the gestures are really evident and other times not so much. However, there’s always a small change in the face. On the other hand, these gestures will depend on the intensity of the emotion.

Nonetheless, there are gestures that are very easy to identify. The first is when a person raises their eyebrows. If fear comes after surprise, the eyebrow movement will be more evident. If it’s a situation that generates only fear, the person will definitely furrow their brow.

Usually, the lower eyelids remain tense. Then, the person will open their mouth halfway. In general, it’s as if something was pulling the fearful person’s face and they’re trying to fight it.

Posture and the body language of fear

Posture is also a very important element in the body language of fear. In general, your muscles tense up when you’re scared. The first thing that happens is that you begin to slouch (your body does this to occupy less space). This is an expression of the desire to protect yourself and take refuge in your own body.

Insecurity, nervousness, and anxiety are manifestations of fear. Those three states tend to come to the surface when you make quick and sudden movements. A person who isn’t able to stay still isn’t calm. When fear is overpowering you, you’re more likely to make more clumsy or sudden movements.

Similarly, it’s very common for a scared person to cross their arms. This is a defense signal. The person does this to create a barrier that protects them and keeps them away from the external world. This barrier can also be a sign of rejection of the outside world.

Other signs of fear

There are other gestures and expressions that are part of the body language of fear. For example, your eyes can give away that you’re scared. Nervousness makes your eyes wander and blink more. But if you’re feeling a deep and strong fear, you may even not blink as much. The goal of this last mechanism is to keep the threat in sight.

On the other hand, your hands are also vital in the communication and expression of your emotions. Fear isn’t an exception. When someone is scared, they usually move and twist their hands, make fists, or hide their hands. Not letting people see your limbs is an instinctive act of self-defense.

In general, when someone is scared, they tend to make short, quick, and erratic movements. And if they’re truly terrified, the opposite happens: they freeze. In the first case, the person can’t sit still. In the second, they stay very still and slouch. This is basically how the body language of fear works.

How to Deal with Fear According to Buddhism
Dealing with fear involves handling love and attention problems. He who focuses on the present and fills himself with compassion is not likely to feel it. Read more »

Link copied!
Interesting Articles
Self-esteem
Do You Have a Healthy Self-Esteem?

Wellness
The Give and Take of Love

To love without being loved back can be one of the most difficult experiences we can endure in our lives. It's a moment during which we experience abandonment, sadness and…

Wellness
Self-Injury: What Is Behind It?

You take the steel blade of a pencil sharpener, a razor, scissors or even your own nails and you draw…

Prejudice is all around us, even if we don't notice it. It's what leads us to stereotype the people around us without stopping to listen…

Wellness
What Seems Like an Ending Can Be My Best Beginning

A certain number of years will go by and I will die. That may be my definitive ending, but until…

Self-esteem
7 Self-esteem Quotes to Help You Value Yourself

Valuing yourself is a task a lot of us still have to work on. Learning to identify all of the…