Emily Dickinson and Her Inner Demons

Emily Dickinson spent the last twenty years of her life locked in her room. She always wore white, suffered from migraines, and asked to be buried in a vanilla-scented white coffin. 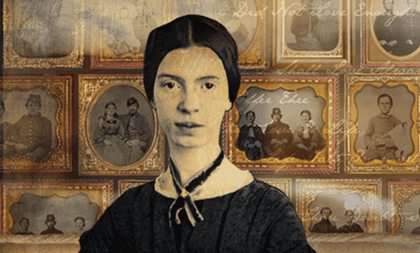 “One need not be a chamber to be haunted,” said Emily Dickinson. Few figures in the world of poetry have been so mysterious from a psychological standpoint. According to various experts, works like “I felt a Funeral, in my Brain” give you a glimpse into why she decided to stay inside her room all day, isolating herself from the world and society.

There’s been a lot of speculation about the possible mental disorder the famous American poet might have suffered from. Her seclusion began in 1864 when she was approximately 30 years old and ended on the day of her death when she was 55. During her seclusion, she chose to wear white and never leave the confines of her room.

However, this isolation allowed her to immerse herself fully in her literary work. Without a doubt, her solitude led to enough inspiration for her artistic creations. But, little by little, she became little more than a ghost behind a window. She wasn’t even able to attend her father’s funeral, which was held in the living room of her own home.

Since then, there have been more studies. Through them, you can get a rough idea of those inner demons that consumed Emily Dickinson’s life. Ironically, they’re the same demons that undeniably gave her a creative impulse.

“I felt a Funeral, in my Brain,
And Mourners to and fro
Kept treading – treading – til it seemed
That Sense was breaking through –

And when they all were seated,
A Service, like a Drum –
Kept beating – beating – til I thought
My mind was going numb […]”

Emily Dickinson and her inner drums

Poets have always had the extraordinary ability to submerge themselves in their complex minds. For example, Edgar Allen Poe himself wrote in his poem “Alone”: “From childhood’s hour I have not been. As others were—I have not seen. As others saw—I could not bring. My passions from a common spring.”

For some reason, many of these poets were extraordinarily brilliant as well as mentally ill. And they were always aware of their unique conditions. Emily Dickinson wrote in her poem “I felt a Funeral, in my Brain” that her madness was her most divine sense. It let her write about and feel the most profound hardships.

Something you need to understand about Emily Dickinson was that, like many other people, she didn’t suffer from a singular psychological condition. There’s evidence that she suffered from many other types of problems, such as migraines.

Some experts on Emily Dickinson’s works suggest a particular idea. According to them, the choice of isolating herself from the world and secluding herself in her room was a way to better concentrate on her work. However, some aspects need to be taken into account:

In her book, Wider Than the Sky: Essays and Meditations on the Healing Power of Emily Dickinson, Cindy MacKenzie talks about how Dickinson used poetry to manage her illness. She was always very aware that something was wrong with her. Likewise, she knew that those inner demons, as she called them, clouded her reason, senses, and balance.

Steven Winhusen, a doctor from Johns Hopkins University, carried out an interesting study on Emily Dickinson. In his opinion, what the famous poet suffered from was a schizotypal personality disorder. There are various reasons to back his conclusions including the very graphic information she reveals in her poems, her need for isolation, and the way her penmanship deteriorated. Her thoughts, creative genius, and the emotions that permeate her poems undoubtedly fit this diagnosis.

Emily Dickinson died from Bright’s disease on May 15, 1886. It was the same kidney disease that, interestingly enough, also ended Mozart’s life. She was buried in her town’s cemetery, in a vanilla-scented white coffin, according to the instructions she left behind.

The reason behind her isolation is and always will be an enigma. Although that secret went with her to her grave, she left behind a great legacy. Despite the immense suffering she experienced, undoubtedly due to her ‘inner demons’, she left us the great gift of her work.

Nikola Tesla, the Solitary Genius of Light
It's easy to say that Nikola Tesla was the genius who illuminated the world. To imagine a world without him, all you have to do is turn off the light. Read more »
Link copied!
Interesting Articles
Literature and Psychology
"And the People Stayed Home": A Poem to Make Us Think

Let's be honest. On a daily basis, most of us cope with a mind that wants to go faster than…