Unlike other geniuses, Wolfgang Amadeus Mozart wasn't a rebel nor a transformer. Instead, he was a man happily devoted to his passion for music and the joy of creating. 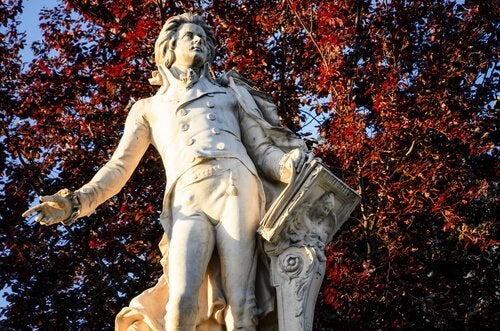 Although Wolfgang Amadeus Mozart only lived for 35 years, he left more than 600 complete compositions and about 132 unfinished ones. Although he became a celebrity during his childhood, the last years of his life were full of misery and oblivion. He was a musical genius that represented the end of the classical period and the beginning of romanticism.

Leopold Mozart and Anna Maria Pertl had seven children. However, only two survived: Maria Anna and Wolfgang Amadeus. His father dedicated his entire life to music. He had studied singing, organ, and composition at Benedictine University. Then, he became a violinist and taught singing and violin to the children of royalty.

Maria Anna, whom everyone fondly called Nannerl, was five years older than Wolfgang Amadeus. She also was an excellent pianist. However, due to his brother’s success, she had to give up her musical aspirations since their family didn’t have enough financial resources to support them both.

“The music is not in the notes but in the silence between.”

It all started when Wolfgang Amadeus Mozart was 4 years old. He was sitting on his sister Nannerl’s lap while she practiced her daily piano lesson. Suddenly, the boy approached the piano and repeated the melody that his sister had played a few seconds ago. Nannerl, amazed by what had just happened, immediately informed her father.

From that moment on, Leopold encouraged his son to learn music. He became his dedicated, personal instructor and, in turn, Wolfgang became an exemplary student. The boy loved music and didn’t need external pressure to study it. Before he learned to write, he learned musical notes and how to read sheet music. He made his first composition, a piano and violin sonata, at age six. His father was ecstatic.

Leopold arranged presentations for his two children. The first presentation was for the Archbishop of Salzburg, who was the head of government at that time. Then, they toured around Europe and captivated everyone that listened to them. Their father wanted his children to become famous. He didn’t care about money, which is why they were always paid with cheap jewelry.

“All I insist on, and nothing else, is that you should show the whole world that you are not afraid. Be silent, if you choose; but when it is necessary, speak—and speak in such a way that people will remember it.”

His childhood travels and arduous work affected Wolfgang Amadeus Mozart’s health. However, he really enjoyed working. Some say that he stumbled and fell in one of his concerts and a girl helped him get up. In gratitude, Wolfgang promised to marry her when they were older. That girl then became Queen Marie Antoinette of France.

Mozart had written about 200 compositions by the time he was 19. He toured Italy, which was precisely where he began to consolidate himself as a composer. After that, his father wasn’t allowed to leave Salzburg, so Wolfgang’s mother accompanied him on his tours.

Mozart’s sentimental life was random and irrelevant. He had many romances with women who also dedicated their lives to music. He married Constance Weber in 1782. She, however, wasn’t exactly his lifelong partner. They had six children, of whom only two survived.

“Neither a lofty degree of intelligence nor imagination nor both together go to the making of genius.”

Although Mozart was famous throughout Europe, he always had financial difficulties. Neither his wife nor he saved money. That’s why they always had great economic difficulties despite the successes of works like The Marriage of Figaro, Don Giovanni, or A Little Night Music.

It’s said that when he was about to finish The Magic Flute, a mysterious man asked him to compose for a funeral service and paid him for it. Wolfgang Amadeus Mozart put himself to the task and composed his famous Requiem. By that time, he was already very sick. His rheumatic fever wouldn’t even let him play the piano.

On December 4th, 1791, he invited some pianist friends to play Requiem since he couldn’t do it himself. Some say that when Lacrimosa started playing, he began to cry. His friends left and he died at dawn. On the day of his burial, there was a huge storm which kept everyone from going to the cemetery to mourn him.

“It is a mistake to think that the practice of my art has become easy to me. I assure you, dear friend, no one has given so much care to the study of composition as I.”

Does Music Make Children Smarter?
Have you heard about the "Mozart effect"? Does music make children smarter? Read on to learn about the real relationship between music and intelligence. Read more »
Link copied!
Interesting Articles
Art and Psychology
The Psychology of Art: Concepts and Characteristics