Migraines and Dopamine: A Painful Relationship 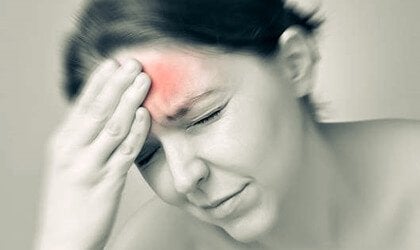 Migraines and dopamine share a direct link that not everyone is aware of. When a person suffers from migraines, their brain goes through changes. One of those changes affects this type of neurotransmitter, dopamine. Scientists have observed that when a person has lower dopamine levels, they tend to suffer from hypersensibility. In other words, they experience pain when they see light or hear noises.

There have been some speculations for a while regarding this relationship. However, it wasn’t until about a year ago that Alex DaSilva, a professor at the University of Michigan, published an article in the journal Neurology detailing this complex process. Thanks to new diagnosing techniques and advances in positron-emission tomography (PET) we have accurate and detailed images of every change that our brain undergoes during a migraine.

In fact, anybody that’s had this condition knows that there are recurring aspects as well as exhausting ones. On some occasions, a smell, touch, sound, or even the sun’s reflection is enough to instantly experience intense pain.

This condition isn’t really understood. If you haven’t experienced them before, it’s hard to comprehend why a dim room causes relief or why it’s impossible to be productive. Things like painkillers or a few hours of rest aren’t enough to relieve the pain. A migraine produces many alterations in the brain that make it different than a simple headache. Let’s analyze them.

“And screened in shades from day’s detested glare; She sighs forever on her pensive bed; Pain at her side, and megrim at her head.”

Migraines and dopamine: A painful relationship

Greek mythology tells us that Zeus suffered a terrible headache for a long time. Vulcan relieved his suffering by opening his skull with an ax. Then, Athena, the goddess of knowledge, emerged from his skull.

Aretaeus of Cappadocia, and later Galen, used this metaphor to define what they called heterochrony, an intense and devastating headache. Later on, in the seventeenth century, neurologist Thomas Willis called it a migraine.

There’s one fact we can’t ignore. Migraines affect almost 15% of the population. Additionally, according to the Institute of Health and Biomedical Innovation of the Queensland University of Technology, it’s genetic. Therefore, it’s very likely that the children of people who suffer from migraines will also get them in the future.

Thus, we need to further examine this condition in order to prevent it and treat it more effectively. To do that, getting to know the relationship between migraines and dopamine is without a doubt a good first step. Let’s look at what this relationship consists of.

Dopamine and its function in the brain

Dopamine is one of the most important neurotransmitters in our brain. It’s essential for many motor and cognitive processes.

Furthermore, according to a study in the journal Nature Neuroscience by the Charité – Universitätsmedizin Berlin, the concentrations of this neurotransmitter in your amygdala will determine if you’re more nervous or calmer.

In turn, to understand the relationship between migraines and dopamine, it’s important to know the functions this chemical participates in:

People with migraines have fluctuations in their dopamine levels

Professor DaSilva made the following discoveries after conducting a series of tests on a large number of people suffering from this condition:

All of this makes experts wonder if migraines are related to a problem with dopamine fluctuations. There are moments when they decrease and others when they increase if there are certain stimuli present, such as heat.

Foods with tyrosine and their relationship with migraines and dopamine

Tyrosine is a non-essential amino acid that serves as a precursor for the production of dopamine and adrenaline. Because of this, it’s necessary to regulate the consumption of all foods that contain tyrosine.

Rather than eliminating foods that contain tyrosine from our diet, we should try to moderate their consumption. Keeping in mind that this condition creates clear fluctuations in our dopamine levels, it’s necessary to avoid generating too much or not enough dopamine. Balance is the key. Therefore, it’s helpful to remember which foods are the richest in tyrosine:

In conclusion, there’s a clear link between migraines and dopamine. It’s worth mentioning that scientists are presently developing new drugs to regulate dopamine production to sooner or later be able to create an effective treatment.

What is Dopamine and What Does it Do?
Although dopamine is famous for giving us pleasure, it also works in everything from the regulation of motor aspects to the production of breast milk. Read more »
Link copied!
Interesting Articles
Cinema, Television, and Psychology
This Emotional Short Will Teach You a Lesson in Generosity

Culture
How to Protect Your Home from Negative Energy

Negative energies are something many people try to avoid, especially within the home, which is a resting place that should always…

Most of the time we go to the psychologist already with an idea in our head of what's causing us so much pain. Other times we're having problems identifying what's…

Culture
Albert Einstein: What He Did and Didn't Say

Albert Einstein: the endearing German physicist that, even years after his death, still moves the world. He was a genius teeming…