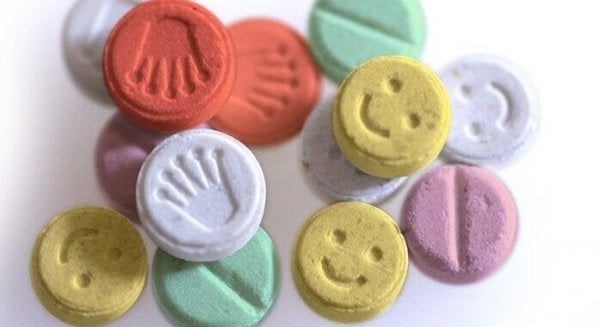 The psychoactive substance we know as ecstasy is a synthetic drug. That means that it is made in a lab via chemical synthesis. People usually produce drugs this way to get around the legal system. Producers take illegal substances and make small changes to them in the lab. That way, they end up with a new chemical formula that isn’t technically illegal.

Ecstasy is the street name for the drug called MDMA (methylenedioxymethamphetamine). People often call it “The love drug” because it heightens the user’s perception of colors, sounds, and touch during sex. Other street names include “the hug drug,” “candy, and “molly,” among others.

This drug has destructive effects on the body and mind. The “cute” names for ecstasy are just marketing tactics that dealers use to promote the drug.

“Vices come like passengers, they visit us as guests and stay as masters.”

The history of ecstasy

In 1912, Anton Köllisch, a scientist in the Merck lab in the United States, made ecstasy for the first time in history. He called it MDMA, after the initials of the drug’s ingredients. We know that in the fifties, the U.S. government used the drug for psychological interrogation and tests in combat.

In the 60s, people started using ecstasy as a therapeutic drug to overcome social inhibitions. It wasn’t until the 70s that it appeared as a recreational drug at parties and other social events. Later, in the 80s, consumption became more popular. In 1985, the U.S. government prohibited distribution of the drug.

In the early 1990s, traffickers started calling a variety of synthetic drugs “ecstasy.” This was in spite of the fact that many of them had little to do with the original MDMA. Experts have found ingredients in these drugs like de-worming medicine for dogs and even rat poison. Today, a person buying ecstasy on the street has no idea what they are getting. Consequently, it is a very dangerous drug.

Currently, most ecstasy is produced in Europe. Primarily in Holland and Belgium. Russian organized crime members, working with Israeli criminals dominate a large part of ecstasy trafficking. Then, bulk buyers in the United States purchase a significant percentage of the drug.

Some facts about consumption

In general, ecstasy comes in the form of a pill. However, you can also find it in liquid form, or as a powder that you water down and inject. These days, producers and dealers sell it in different colors, designs, and shapes. Most of all, they are trying to make it attractive to young people.

The United States has a high number of ecstasy consumers. The National Study of Drug Consumption and Health of 2007 found that more than 12 million people had taken ecstasy at least once in their lives. That is equal to 5% of the country’s population at the time. Moreover, the United Nations Office on Drugs and Crime indicated in 2016 that at least 20 million people consumed the drug that year.

The 2007 study also established that nearly 92% of ecstasy users also moved on to other drugs like cocaine, heroine, or amphetamines. The study also found that some ecstasy users were as young as 12 years old.

In spite of these worrisome findings, Andrew Parrot, with the non-profit organization Multidisciplinary Association for Psychedelic Studies (MAPS), carried out another study. The goal was to evaluate whether MDMA could have a positive effect on certain therapies. The conclusion was that it seemed to help some patients with post-traumatic stress. Nevertheless, they later found that the substance causes long-lasting damage and doesn’t outweigh the minimal benefits.

The effects of ecstasy

MDMA is classified as a psychedelic hallucinogenic drug. The hallucinogenic effect means that users see or perceive things that don’t really exist. Contrary to popular belief, these hallucinations aren’t always pleasant. In fact, it’s possible to have very terrifying experiences under the influence of the drug.

Ecstasy causes a rapid increase in body temperature. The dangerous part about that is that the drug also impedes the user’s ability to clearly understand what is happening in their body. Add this to the fact that people usually use it at parties, in enclosed spaces, and surrounded by many people and it´s not surprising it can have serious reactions.

The psychedelic effect has to do with sensory alteration. When you consume ecstasy, colors seem especially intense and pleasing. The same goes for sounds and feelings on your skin. That’s why the “love drug” encourages physical contact and represents a “different” kind of experience for many young people.

The drug usually takes effect about 20 minutes after you take it. First, you feel a sudden tingling, then a feeling of calm. The drug also causes euphoria. You feel an intense sense of vitality and excitement. Sometimes it causes paranoia, severe anxiety, and confusion. Users might also vomit and feel nauseous, or have arrhythmias or muscle spasms.

Ecstasy’s effects depend a lot on the tolerance of the user. Sometimes a high dose won’t have much of an effect on one person. In another, a small dose could cause discomfort or even serious problems. That means that there isn’t a direct correlation between the amount you consume and the effects of the drug.

Ecstasy helps release the neurotransmitter called “serotonin.” Serotonin is a brain chemical that improves mood. However, ecstasy consumption paradoxically creates a barrier to accessing the hormone. This is known as “serotonin syndrome” and it happens when there is a high concentration of serotonin in the brain. The consequence is confusion, agitation, and hyperthermia.

One of the typical side effects of ecstasy consumption is bruxism. This is a grinding or clenching of the teeth. This happens because the drug triggers intense muscular tension in the jaw. It can also cause stiffness in the neck, the back, and the shoulders. As a result, you often find pacifiers, gum, and massage tools in places where people consume ecstasy.

Some of the more serious long-term effects are:

Addiction and risks of consumption

There is no evidence that ecstasy consumption causes dependency from a physical point of view. Nevertheless, there are very concrete dangers for habitual consumers of the drug. The first of those dangers, as we mentioned before, is that users don’t really know what is in the pill they are taking. You can be sure that producers never alter the drug to make it better. They change it so that it is cheaper to produce.

Another risk is that users quickly become tolerant to the drug. They need to consume more and more to feel the same effects as the first time they take it.

In addition, users experience a comedown, or anticlimax, when the drug’s effects wear off. The higher the dose, the more intense the feeling. As a result, some users turn to other substances to get relief. That’s why ecstasy often leads to consumption of other psychoactive drugs.

From a psychological point of view, ecstasy can cause dependence. An individual could start to think that they only feel good when they use ecstasy. This belief is why they keep taking the pill in spite of the unpleasant or serious side-effects on their body.

Studies on the impact of ecstasy

Scientists at John Hopkins University showed that MDMA causes damage to brain cells. To test their hypothesis they gave the substance to a group of rats. They were able to show damage to the cortex of serotonergic axons, located in the neurons.

In observations of human brains using cerebral scans, the study showed that there is a drastic reduction in serotonin in brains of ecstasy users. We don’t just see the effect in habitual consumers, but also in people who have only taken the pill once.

Likewise, in a study from the Center for Social Work Research at the University of Texas, researchers found that habitual MDMA users frequently develop symptoms of depression and have difficulty concentrating. They also observed nervousness and frequent tremors in many MDMA users.

In addition to these studies, in 2007 the scientist David Nutt carried out an ecstasy study in the United Kingdom. The study aimed to catalog the 20 most dangerous psychoactive drugs in descending order. Ecstasy was number 18 on the list, and many people interpreted that to mean that it isn’t very dangerous. However, it is important to reiterate that one of the biggest risks is the combination or adulteration with other substances for sale on the street.

Psychology
Dependent Personality Disorder: What Is It and Who Does It Affect?

The inability to be alone, an almost suffocating dependence on others, insecurity, no personal responsibility and an obsessive fear of…

Psychology
The Difficulty of Facing the Feeling of Emptiness