Dolores Claiborne is a Stephen King classic. It's the story of a mother who will stop at nothing to bring hope to her daughter's life. 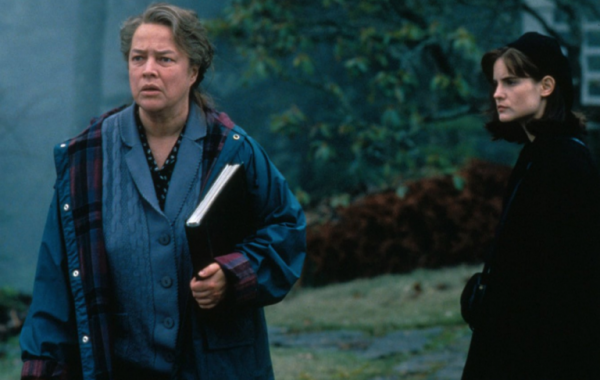 Under a grey and melancholic sky, Stephen King unleashed another labyrinthine tragedy in Dolores Claiborne. It’s linked in many ways to Gerald’s Game, and, according to this source, it seems that they were originally going to be the part of the same novel under the title In the Path of the Eclipse. Although Gerald’s Game was written first, it was released in 2017.

It’s a horror story, but not a supernatural one. All the elements in the film come about through everyday horrors, such as alcoholism, gender violence, humiliation, dehumanization, labor exploitation, and child abuse.

Dolores Claiborne (Kathy Bates) had been the caretaker of Vera Donovan (Judy Parfitt), a frail old woman who dies after falling down the stairs. Detective Mackey (Christopher Plummer) is ready to prove Dolores’ guilt.

There are precedents in all of this. The detective also investigated the “accidental” death of Dolores’ husband (David Strathairn). He’s certain that she murdered him almost twenty years previously.

Upon discovering her mother’s arrest, Selena (Jennifer Jason Leigh) returns to her childhood home and the scene of many traumatic memories for both her and Dolores.

The plot of Dolores Claiborne

Dolores Claiborne worked for Vera Donovan for over 20 years. Her job wasn’t an easy one. For example, Vera demanded that she hung each sheet with six clothes pegs instead of five, and always at the top of the garden. She had to repeat this ritual all year.

After Selena’s return, mother and daughter returned to the ramshackle family home. We see Selena smoking and consuming alcohol and pills to control her stress.

The new surroundings cause her great anxiety, which, in turn, feeds the resentment she held against her mother. She suspects it had something to do with her father’s death, when he fell into an abandoned well the afternoon of the total eclipse.

While Selena helps her mother “in her own way”, Dolores helps her unlock memories of the sexual abuse she suffered as a child at the hands of her father. As a result of this abuse and the theft of all of Selena’s college savings, we see that, in fact, he was killed by Dolores.

Taking advantage of the total eclipse that day, she hatched a perfect plan so that the police wouldn’t discover that it was her.

Now, twenty years later, the detective who almost caught her back then has now returned to investigate Vera’s death. He’s determined to put her away. He’s close to retirement and doesn’t want to leave any cases unfinished.

Dolores, a mother who wants to protect her daughter

Dolores is a mother who’s devoted to what she considers to be her daughter’s happiness. However, at the same time, she has to face the fact that she doesn’t have any natural ability to communicate that to her. In fact, the story gains in intensity when this emotional blockage becomes evident. It seems as she’s tried to cut all her emotions out of her life in order to lessen the pain.

The father is someone we just can’t understand. He appears as someone who eliminates emotions. His character only invites rejection and shows us that some people still haven’t finished their process of humanization. In fact, in the film, the character is only there to help the viewer understand the relationship between mother and daughter, and their subsequent behavior.

Women in a man’s world

The women in the film exist in a world full of men who seek to divide them and keep them quiet. It frames the way that patriarchal society ignores older women until they do something seemingly heinous.

These women are underestimated every step of the way, and the strength they find often comes from their relationships with the women that surround them. The film focuses on this dynamic, which we’ve all seen repeated hundreds of times in real life.

Thus, Dolores finally gets a chance to tell her daughter the truth. Selena realizes her mother’s strength as she listens to her confession. Dolores lost almost everything in an attempt to keep her daughter safe from the man who was abusing her.

This exercise in honesty allows Vera to see herself in her mother, and to see that they’re one. They’ve come to the same place to deal with all the abuse and pain.

Kathy Bates is the perfect actress to play a woman like Dolores. Bates gives a performance as fierce as it is tragic. Jennifer Jason Leigh handles Selena’s slow decline with finesse. Selena and Dolores’ frantic relationship drives the film, and this is accentuated by the stormy friendship between Vera and Dolores.

Vera’s role is also excellent, and a reminder that women get caught up in all kinds of situations. All three women show a front of resistance to a world that has made them victims. But, as Vera notes, “sometimes being a bitch is all a woman has to hang on to”.

A climax of overflowing emotions

The film is calling out for a different ending, one in which Selena will embrace her emotions. What the audience needs is a big, sentimental wave of emotion.

Instead, what we get is a continuous atmosphere of coldness, slightly tempered by the suggestion that the distance between mother and daughter has shortened somewhat.

Even though this isn’t an emotionally satisfying end, it’s a realistic one. But this film is about family horrors, which leave their mark on our hearts and emotions. Even though we would have loved a different ending, what we get is a realistic and sincere one.

The Valhalla Murders – The Thriller about Child Abuse
The Valhalla Murders Originally created by RUV, the Icelandic National Broadcasting Service aired in Iceland in 2019 and is now available on Netflix. Read more »
Link copied!
Interesting Articles
Cinema, Television, and Psychology
Get Out: A Sublime Mix of Comedy and Horror