Desperation: When You Think All Is Lost

Desperation consists of mental, emotional, and behavioral exhaustion. It means being tired of many accumulated disappointments and sadness. 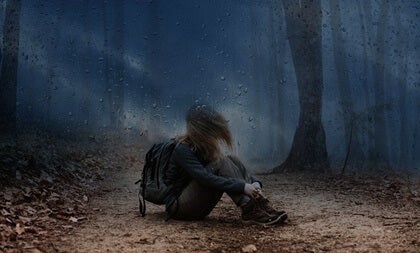 Desperation is a poison that turns off your hopes, motivations, and energy little by little. It’s the scab that permanent disappointment leaves and the thorn that makes you breathe through bitterness until you’re immersed in a dangerous psychological trap.  In the long run, this state makes you extremely vulnerable to depression and other emotional disorders.

In their day-to-day clinical practice, doctors know that many psychological conditions have established interventions that can help people. For example, they know what therapies and strategies to offer patients with anxiety, post-traumatic stress, and phobias, among other conditions.

However, other realities are real challenges for professionals to deal with. This happens when someone shows up saying they’ve lost their meaning in life. They feel trapped by desperation and suffer emotionally without really knowing why.

This type of disorder doesn’t always appear in the DSM-5 (Diagnostic and Statistical Manual of Mental Disorders). Many of these patients haven’t yet crossed that line in which a clear clinical conditional manifests. However, they’re lost in the abyss, on an edge that requires quick intervention.

If there’s one thing that all psychologists know, it’s that desperation translates into a loss of vital significance. It’s that dangerous and irrational belief that everything, absolutely everything, is lost.

Desperation, the emotional and behavioral response that precedes depression

Observe the above image for a minute. It’s a painting from painter Evelyn De Morgan, a Pre-Rafahaelite artist. It’s called Hope in a Prison of Despair”. In it, you can see a dark dungeon where a woman is inclined and hiding her face. In front of her, there’s a window. However, she doesn’t even go to it to see the light of the sun. This figure is the embodiment of desperation.

Behind her, you can see a young man holding a lamp. He represents hope trying to illuminate the woman, comfort her, and bring her back to optimism and inner strength. The painter wanted to show a scene of inspiration that everyone should invoke. People can come out of their personal prisons when they leave behind their disappointments, sorrows, frustrations, and emptiness.

What exactly is desperation?

The word “hope” comes from a French term, espoir, which means to breathe. As a result, desperation symbolizes not just a lack of breathing but also the absence of “spirit”. It’s the loss of that essence that makes us human.

More than that symbolic meaning, an objective reality causes this feeling. Desperation, instead of having just one explanation, is a complex and dynamic internal framework. This is why it’s hard for a person to explain why they feel this way.

One thing that psychologists can’t ignore is that, if these symptoms are persistent, they can lead to a depressive process.

Desperation is usually something that comes and goes. It’s that annoying resident that sometimes visits you but luckily goes away when you change your focus or start new habits.

Studies like this one, which was conducted at the University of Twente in the Netherlands, show that desperation tends to be linked to one’s personality style. Some profiles simply have a greater tendency toward pessimism and helplessness. However, that doesn’t mean that they’re necessarily destined to suffer one depressive episode after another.

Everyone has the opportunity (and the obligation) to make use of their personal resources to face desperation. Here are some keys that can help you learn how to do this:

In conclusion, when you find yourself in that prison of desperation symbolized in Evelyn De Morgan’s painting, the most important thing to do is generate alternatives, open new doors, and embrace new environments. You also have to remember that it isn’t always possible to get out of these painful cycles by yourself.

Cognitive-behavioral therapy can be helpful in these cases. Don’t ever doubt the importance of finding professional help if you can’t get through it on your own.

Evaluating Your Purpose in Life: The PIL Test
Purpose in life is important because it gives people the will to go on even under the most adverse of circumstances. The PIL test attempts to measure this. Read more »
Link copied!
Interesting Articles
Emotions
Funeral Rituals Are Important in the Grieving Process

Surprisingly, humans aren't the only ones who practice funeral rituals. In fact, some animals do so as well. Of course, in…

Emotions
Don't Say This to A Person Affected by Anxiety

What do you say to someone affected by anxiety? How do you react to that loved one who's about to…

Emotions
Emotional Self-Harm: What it Is and How to Avoid It

When you hear the phrase “self-harm”, you probably think of physically harming yourself. In addition, nowadays, this type of deliberate…