Description and Characteristics of Social Emotions

Love is one of the most powerful and distinctive social emotions. This experience is the social glue that builds human bonds. 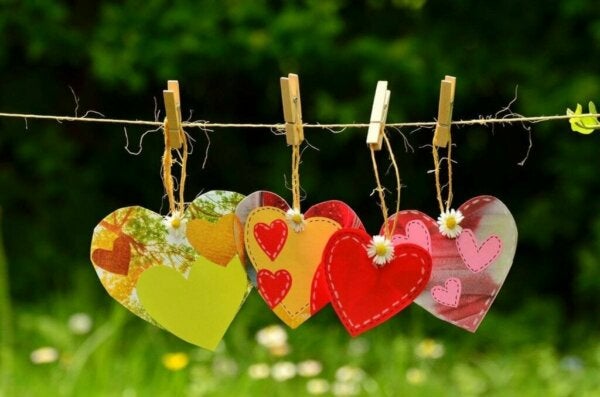 Social emotions are the states that arise when you’re in the company of other people. Shame is an example of it and, basically, arises when a person bases their own worth on other people’s judgment. These kinds of emotions can both positively and negatively influence interpersonal relationships and even the way you see yourself.

Every language has its own definition of specific emotional states that arise only between social groups. An example of this is the German term schadenfreude. This word translates as “deriving pleasure in the misfortune of others, gloating over an evil done to another”.

Similarly, the French language has a much more enriching expression: retrouvailles. It describes the joy you usually experience when you run into someone you like but that you haven’t seen in a long time. Thus, as you can see, people can experience many sensations, feelings, and reactions within a community.

This is why researchers usually differentiate individual emotions from social emotions. The latter is perhaps more interesting because they transfer, are contagious, and allow the creation of interpersonal bonds. At times, they even lead to problems and disagreements.

“You know you’re in love when you can’t fall asleep because reality is finally better than your dreams.”

What are the social emotions?

The role of emotions in each of these scenarios is decisive. But people aren’t always aware of this. In general, most people understand these psychophysiological states as internal states that prepare you to develop a series of behaviors to react to environmental demands with.

However, think about it. Many of these challenges are related to the groups of people that surround you. Work stress, the complexities of romantic and family relationships, the bonds with your friends… Humans are social creatures and, therefore, it’s common for social emotions to strongly stand out.

Some studies, like this one from the University of Amsterdam, point out that human beings are defined by a series of basic emotions such as joy, fear, sadness, disgust, and surprise. Now, possibly, if humans didn’t live in social groups then we’d never experience the states that result from being around people.

Surely, a child that grows up on a desert island would never develop many of these emotions. This is because people acquire them exclusively in a social context, for better or worse.

These don’t mean the same thing but one can place them in the same sphere. Both jealousy and envy are two of the most classic social emotions that only arise in relation to other humans.

The desire to have what the other person has and the fear of losing someone’s affection in the hands of others outline states one would never experience when alone.

This dimension is like a Matryoshka doll: there are many more inside. Admiration is made of affection, of brushstrokes of surprise, attraction, and joy. These are states one projects towards others because something in them is attractive and inspiring. It’s something you usually value.

It’s true that compassion could also be considered an individual emotion. After all, it’s possible and even common to feel self-compassion. However, it acquires real meaning when you experience it in relation to others.

Compassion and a feeling of solidarity are two valuable social emotions. Thanks to it, one can help and give meaning to the human social aspect.

Love is one of the social emotions

Falling in love is one of those things that nurtures and gives life to social emotions. Loving in all its forms, be it a partner, children, family, or friends, is a psychological tendon that gives you strength, meaning, and purpose. Few social emotions are as transcendent as this one.

This social emotion is mixed with fear as it makes it impossible to show yourself as you are. In fact, this fear feeds by the prospect of not being liked or being judged by others. This lack of acceptance, appreciation, and tolerance towards oneself only appears in social scenarios and forms a state that clearly erodes a person’s identity and self-esteem.

Guilt and remorse are social emotions

Finally, these are two of the most common social emotions. Feeling bad about having hurt someone with your behavior, words, or attitudes has been a recurring theme since the beginning of time.

Perceiving that you weren’t fair to someone and being bothered by it helps you learn from your behavior and makes you want to be a better person.

The purpose of all these states, internal experiences, and sensations forms a unique transcendent psychological fabric that only grows in group settings. Understanding this, knowing what purpose they have, and regulating them will facilitate your coexistence and well-being.

Life Is Measured In Emotions, Not Hours
Life is measured in emotions. They are the score that gives music to our life. Today, we'll be discussing this idea in more detail. Read more »
Link copied!
Interesting Articles
Family
A Better Way To Educate and Raise Children

Learning hubs for social skills are the necessary tools to relate to others and feel a part of something. Through…

Conflicts
Don't Expect People to Change for You

Expecting people to change for you is useless. This often happens in relationships where one person wants the other person…