It's time to start distinguishing between sacred and non-sacred values ​. There are many voices and opinions in defense of political or religious ideologies that defend their sacred values. The question is, do we really want that as a society? Today's article is about social exclusion. Continue reading to find out more about it! 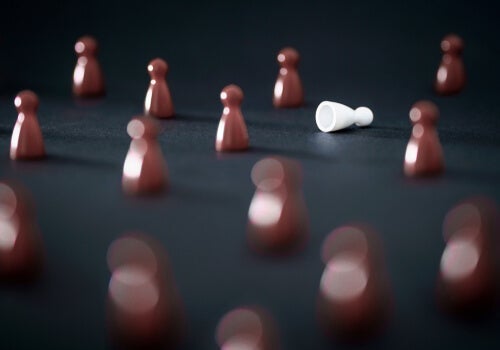 A novel study investigated the neural interrelationships between sacred values, social exclusion, and extremism with violent manifestations. This research revealed that the social exclusion of a group of people increases their number of ideological values, especially those ​​they’re willing to fight and die for.

This is a rather disturbing result. Particularly at a moment where the social exclusion created by the economic recession has put a high percentage of the population in check. Also, due to the massive human migration that affects many people on the planet. According to this study, being socially marginalized can lead to radical extreme trends in the way a person thinks and acts.

“Collective fear stimulates herd instinct, and tends to produce ferocity toward those who are not regarded as members of the herd.”

The study was conducted with neuroimaging techniques in young people in Catalonia by the Autonomous University of Barcelona. The Hospital del Mar Medical Research Institute also participated in collaboration with other institutions. The group of individuals in the sample were young boys. Mainly those vulnerable to radicalization, such as Moroccan citizens who became residents and studied in Catalonia.

Published in the Frontiers of Psychology journal, the study, conducted in two phases, studied the neural substrate of values perceived as non-negotiable. Values ​​people don’t waive under any circumstance. Especially those values ​​linked to ideological affiliation, religious identity, or nation/community. These factors have an identity component that facilitates an individual’s perception of belonging to a reference social group.

For the study, magnetic resonance images focused on left inferior frontal gyrus. The result showed an increase in the activity of this brain area. All while the youth responded to their will to die and fight for their values. This area of ​​the brain processes this type of values ​​and also rules.

The dangers of social exclusion

The results obtained by Clara Pretus, first author of the article, lead people to think that social exclusion can produce a sacralization of group values. In other words, the values ​​defended in groups could acquire the rank of sacred. At least as much as personal values, maybe even more. This seems to occur both in neural activity and in the will the study participants express.

If you think about the zones activated by the defense of sacred values, this study shows you these types of values ​​process through reasoning based on duty. “The right thing to do”, that is. Little relevance is given, in this case, to the cost-benefit assessment. That which is applied to the values ​​not considered sacred. Those that are usually more flexible and with more opportunities for negotiation.

This research has been conducted with a group of people who are vulnerable to radicalization due to their condition of permanent social exclusion. But perhaps it’s worth stopping to reflect on why so many radical attitudes have manifested in Western society in recent years.

Social exclusion can occur in many ways. You find it individually, but also support it to a greater or lesser degree in relation to your feeling of belonging. The truth is that people have many feelings of belonging. More than they can identify in a first analysis, in fact.

Similarly, recent research shows that social exclusion, of any kind, can promote the radicalization of ideas and attitudes. This could indicate why there so many extreme opinions on topics such as politics or religion.

Many voices and opinions are in defense of political and religious ideologies people process as sacred values. Do we, as a society, really want that? Is this really a society where people exclude each other by values ​​of questionable depth? This study is nothing more than a small replica in a lab, but it’s definitely revealing.

Ostracism and Social Exclusion
Ostracism and social exclusion are forms of social punishment. They happen due to all sorts of prejudices and to the diversity of beliefs or values. Read more »
Link copied!
Interesting Articles
Biographies
The Vikings: Were They Bloodthirsty Killers?

The creative brain is incredible. It's playful, full of emotions, free, and tireless. It doesn't believe in limits. The creative…

To buy or not to buy, that is the question. Big brands can't give consumers too much leeway. This is…

Culture
Joseph Campbell and the Power of Myth