How Long Does Falling in Love Last?

We've all fallen in love at some time or another, and there's no doubt that it's an incredible feeling. However, it can also be an agonizing one if not reciprocated. In this article, we'll explain what happens when we fall in love using the line taken by most published research. 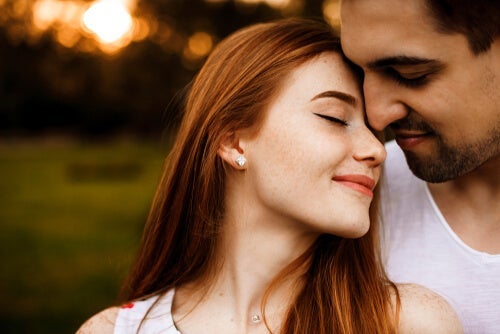 Falling in love is an emotional state characterized by a feeling of joy, fulfillment, and satisfaction caused by an attraction to another person. This stage alters your consciousness somewhat, influencing your body to the point that you sometimes make decisions that you later regret. However, how long does the feeling of falling in love last?

Sexual attraction comes prior to falling in love. You feel desire for the other person, due to the activation of certain brain areas that react to substances called pheromones emitted by the other person. You’ll also experience biological changes in your own body.

Your body will secrete different substances when there’s a stimulus that attracts you (the person or the idea of having them close to you). There’s an increase in testosterone or estrogen, and this, in turn, increases the desire. Then, this desire will lead to an increase in adrenaline, glucose, and phenylethylamine.

These neurotransmitters activate in your body when you feel sexual attraction, increasing your heart rate, making you sweat, and preparing your organs for sexual response and the resultant pleasure.

According to some authors, this feeling of uncontrollable desire for the other person can last for about two years. Around this time, there’s a decrease in the hormones linked to desire. However, this overlaps with the increase of another hormone, known as the love hormone, oxytocin.

Falling in love can make you feel jittery, as you can also experience paleness or blushing. In addition to that, you may feel discomfort, start to stutter, and lose control of your emotions. But why does this happen?

Numerous studies support that falling in love is, in many ways, like an addiction. This includes withdrawal symptoms and over-indulgence.

When you feel desire for someone, your nervous system activates your endocrine system to prepare you for sex. However, the person’s absence, and the subsequent inability to satisfy your desires, leads to the inhibition of the desire.

The prefrontal regions of the brain inhibit the impulse and, with the increase of phenylethylamine, vasopressin, and other hormones, it produces dopamine in large quantities until endorphins are secreted.

All of this produces an imbalance in different systems, such as the dopaminergic pathways. This impossibility to consummate the desire leads to a decrease in serotonin. This, in turn, produces a lack of interest in activities, insomnia, decreased appetite, and decreased concentration, among other things.

The increase in acetylcholine, in turn, leads to obsessive and recurring thoughts about the desired person. We’re talking here about compulsive behavior, such as constantly looking at their picture or checking to see if they’ve written to you.

Oxytocin is a hormone secreted by the brain in the hypothalamus. Although men and women both produce oxytocin, its production is higher in women, and it increases during orgasm, childbirth, and breastfeeding.

In both humans and other animals, this substance is related to affection. Thus, the more oxytocin, the more protective a person or animal is.

At this point, in addition to the attraction, tenderness and affection also emerge. You’ll start to feel the need to be together for a long time, to watch over the other person, and for the other person to reciprocate your feelings. If they do, then both will experience strong feelings just being in each other’s presence.

How long does this last?

Taking into account all the processes that play a role in this infatuation, it’s estimated that the common infatuation lasts for a short time, ranging from a matter of weeks to a year. Interestingly, there seems to be a relationship between the age of the lovers and the duration of the infatuation. The younger they are, the shorter the infatuation lasts, but, at the same time, the more intense it is.

In spite of this, the infatuation can be extended. Taking into account that it’s composed of sexual desire and positive affection and care, you should try to keep these aspects alive for as long as possible.

However, when you move on to a more established love phase, that doesn’t mean your body can’t continue to react strongly and give you the strong sexual feelings that you experienced at the beginning.

Falling in love is a combination of strong sexual attraction and the body’s imbalances. As your contact with the other person increases, this gives way to a more intimate bond. You start to get to know the other person better and think about whether you want to stay together or not.

The initial sexual attraction is compounded by the physical attachment, and the result is falling in love. After this stage, you have the possibility of going further. According to experts, if you consider that the other person has values and a personality that are compatible with your own, the love bond starts to blossom.

Falling in Love After 50: A High-Flying Adventure
Falling in love after 50 - is it possible? Of course it is. And much more so today, when a whole series of age-related myths have already collapsed. Read more »
Link copied!
Interesting Articles
Romantic Relationships
Understanding Relationships: What's True Love?

The world of relationships can sometimes be a bit complicated. It's a social relationship in which two people love each…