Depression in a Relationship: A Needy Kind of Love

One of the main characteristics of depression is deprivation. These sentiments in a relationship can mean it ends up filling with pleas and demands. 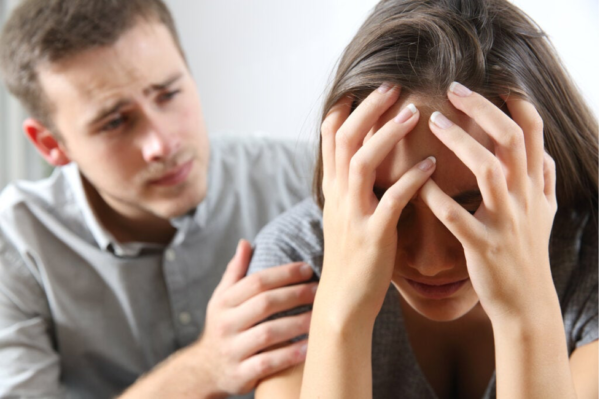 Depression in a relationship occurs when either one or both partners have been diagnosed with depression. Alternatively, they may just suffer from some of the related symptoms. Under these circumstances, both the relationship itself, as well as the feelings, take on specific characteristics of their own. Hence, the couple tends to live out their relationship in a rather unusual way.

Although this might seem a harsh question, it needs to be asked. Can this emotion that emerged in the midst of depression really be called love? Not very often. And if it can be called love, it’s never a good kind of love. Indeed, to love and be loved always requires a certain state of balance.

However, just because relationships between depressed people might not be love affairs with a capital L, it doesn’t mean they’re any less intense. In fact, the opposite is generally true, meaning that these couples usually experience really powerful emotions. Furthermore, the depressed person usually feels that their own mood problems are all sorted. However, actually, they’re simply going to face more problems around the corner.

In depression, you experience inner loneliness, as well as a feeling that you’re lacking something. Irrespective of what this means from a psychological standpoint, in symbolic terms, it’s love that’s lacking. Amongst other things, you lack love for yourself, everyone around you, life, and work.

Moving away from the symbolic to the strictly physical, it’s clear that love transforms the brain’s chemistry. Indeed, when someone’s infatuated, a physiological correlation occurs, and neurotransmitters are discharged. Therefore, the individual feels an increased sense of well-being.

Furthermore, if you join these two elements together, you come to a rather problematic conclusion. From a chemical perspective, love is a kind of “drug” that treats depression. Additionally, from a symbolic standpoint, it satisfies the lack of love issue. Therefore, you arrive at a rather questionable conclusion: that the answer to everything is love.

Depression in a relationship

Depression in a relationship tends to occur when an emotionally lacking or chemically imbalanced individual finds someone who totally transforms them. Indeed, at the first stage of their relationship, infatuation triggers the much-needed cocktail of neurotransmitters in their brain. Thus, the individual feels emotionally fulfilled.

What happens in a partnership affects both partners. However, in these particular cases, the depressed person could be using the relationship in order to make themselves feel better. By adopting this somewhat selfish stance, they aren’t really expressing true love. In addition, they’ll probably find that the next stage in their relationship is nowhere near as harmonious as the first stage was.

Therefore, sooner rather than later, their partner ceases to be a source of comfort and support. Furthermore, they aren’t merely an inanimate object or a drug, but a person. Hence, they start to crack under the strain. Then, problems appear in the relationship. The depressed person might first demand, and later beg, partner to go back to the way they were before. Indeed, they want them to go back to being that person who used to help them deal with their uncomfortable emotions.

Depression in a relationship: a lack of love

Love is the missing ingredient in a relationship between depressed people. It’s not only being loved but being able to love in return that’s missing. Furthermore, being able to let go of the other person and, in the same way, allowing themselves to be let go of. However, it’s impossible to reach that point if the person never loved themselves in the first place.

The depressed person needs to sort themselves out before trying to share their life with anyone else. The biggest risk in these scenarios is that the depressed person imagines that someone else will save them. Indeed, they tend to see their partner as their savior who will eventually rescue them.

What makes this situation risky is that the whole scenario is based on a lie, which reveals itself at some point. Furthermore, far from helping, it’ll cause more pain. In fact, the depressed person might see it as a complete disaster. Indeed, it could be all they need to convince themselves that life consists of nothing but darkness. Furthermore, they think that this darkness controls everything in their life.

Long term relationships between depressed people don’t work. If both partners are depressed, one of them may well end up as the “savior”. However, at some point, the relationship will collapse.

You don’t need to be perfect to experience genuine love. However, a relationship needs nurturing and should never be approached from a position of need and deprivation.

How to Help a Loved One with Depression
Some of us may have a family member or friend who suffers from depression. Though it's painful for them, it's also a very difficult situation for us. Read more »

Link copied!
Interesting Articles
Emotions
Your Capacity for Healing Is Inside You

When life breaks you into a million pieces or your mind takes you to the brink of inexplicable anguish, you…

If there's one popular belief in the field of psychology, it's that psychopaths, Machiavellians, or even narcissists lack authentic empathic…

Emotions
5 Feelings that Seem to Be Love but Aren't

Feelings aren't completely precise. In fact, human beings are known for their ambiguities, contradictions, and inaccuracies. That's why it isn't…