Curiosity, the desire for knowledge, learning, and discovery, is very similar to the hunger for food. So much so that they share the same brain regions and processes. 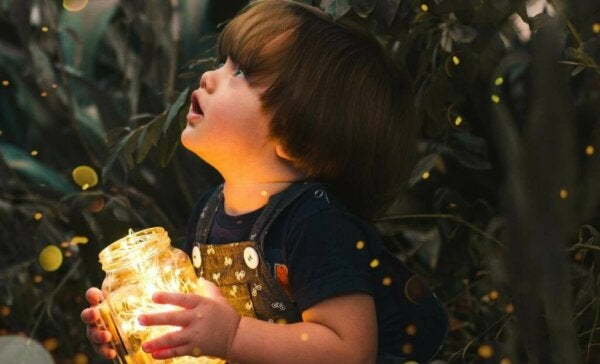 Curiosity and hunger share brain regions. This is a fascinating fact because these are two basic human needs and because both guarantee our survival. One is the drive to find sustenance and the other is about acquiring knowledge with which to better adapt to difficulties and progress.

Albert Einstein said that curiosity has its own reason to be. Few things are more important than questioning everything in the environment. Going beyond the apparent, asking questions, exploring, and looking at the world with the passion, interest, and mischievous innocence of a child is something extraordinary.

As you can see, it’s no coincidence for both humans and animals to have an inquisitive disposition. The urge to discover things is as decisive as the need to feel hungry. In fact, both dimensions act as impulses that guide behavior, guarantee existence, and help us continue to evolve in increasingly complex environments.

What would humans be without the physiological need to find something to eat? Exactly, there would be no human life, and neither would there be without that impulse to look into the keyhole. The one that makes us wonder how to research cures for diseases, for example.

“The public have an insatiable curiosity to know everything, except what is worth knowing.”

Why do curiosity and hunger use the same brain regions?

This is a recent finding. A team of neuroscientists from the University of Reading in the United Kingdom revealed that curiosity and hunger do indeed share brain regions through a study they conducted this year.

They already suspected that both dimensions are two major drivers of motivation. Thus, something they often say is that hunger can lead humans to extreme situations in order to satisfy it. It may seem surprising but curiosity has also led human beings to go to lengths to accumulate knowledge, discover other scenarios, and envision ourselves as the most advanced being on this planet.

Is this a mere coincidence? It doesn’t seem to be. It’s quite possible that hunger and curiosity start from common mechanisms because they lead to the same end: subsistence. Curiosity, after all, drives movement, action, and, above all, going beyond the comfort zone to know what’s on the other side.

Something like this obviously helped humans become explorers, beings capable of crossing new territories to discover better resources to survive and prosper. Think, for example, of prehistoric human migrations and what they meant for humanity.

This discovery by cognitive neuroscientist Johnny King Lau and his team has only confirmed something that many people already suspected.

It’s clear that, although curiosity and hunger share brain regions, the second dimension is a little more complex. The feeling of hunger is a powerful instinct that activates when the brain detects a series of changes in the blood hormone and nutrient levels.

However, the team of scientists from the University of Reading, responsible for this study, detected an interesting phenomenon from the use of MRIs. The same brain region activates when curiosity turns on and when that empty stomach alerts the brain that its human is hungry. That’s the nucleus accumbens. Likewise, other areas such as the bilateral caudate nucleus and the ventral tegmental area also increase their activity.

What do these areas of the brain do in particular though? Actually, these areas orchestrate the types of behavior; the kinds oriented towards the processing of rewards. In other words, they drive a human to take actions that allow them to receive something rewarding.

In the case of hunger, what you get in return for your action are nutrients. Also the pleasure of enjoying a good meal. Thus, as far as curiosity is concerned, you obtain knowledge, make new discoveries, and find new means to satisfy your well-being in many different ways.

Curiosity and hunger share brain regions to keep you motivated

Curiosity and the desire to have information is a psychological phenomenon that’s attracted the interest of some of the most important names in the history of psychology, such as William James, Ivan Pavlov, and Frederic Skinner, among others.

Thus, curiosity and hunger share regions mainly because they’re about motivation. One may seem to us to be a sign of intelligence and rationality (curiosity). The other one, a primary instinct (hunger). However, both are essential to a person’s survival.

Actually, the loss of curiosity is commonly associated with depression and a lack of hunger with illness. Humans are nothing without either of them. As William James rightly said, “the desire to understand what we don’t know keeps us alive because curiosity is also another indispensable form of nourishment”.

Thus, try to maintain this impulse. In other words, find ways to nourish it every day to stay alive in body and mind. In health and hope for advancing beyond any limits and challenges. Curiosity and hunger are two basic instincts in most living beings.

Old Age Starts Where Curiosity Ends
If there were something that truly moves us, it would be curiosity and the desire to know new things, worlds, and experience. Read more »
Link copied!
Interesting Articles
Research
5 Discoveries In Neuroscience That Support Montessori Teaching